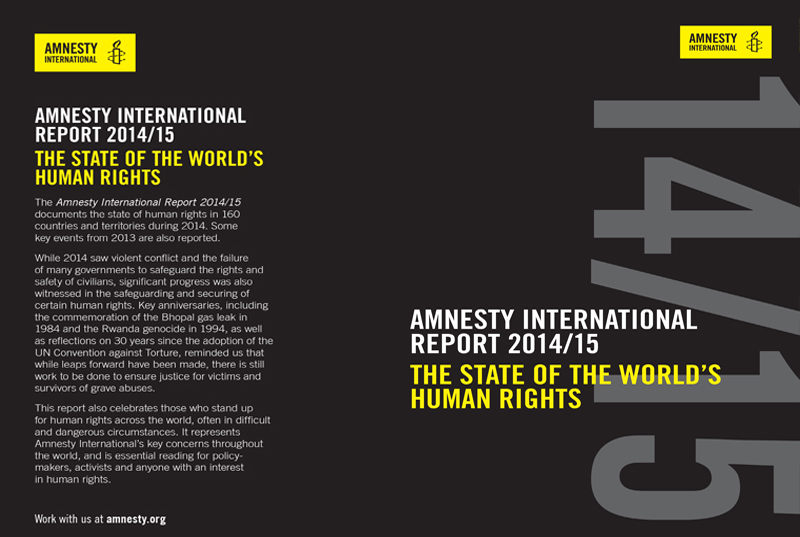 Dharamshala: - The 2014/15 annual report by international human rights watchdog Amnesty International condemned the compromise of basic freedoms faced by Tibetans at the hands of the Chinese government.

The 400 page report – released on February 25 – documents the condition of human rights in 160 countries and territories during 2014, as well as covering key events of 2013.

In its section on Tibet – under the sub-heading 'China' – it states: "Ethnic Tibetans continued to face discrimination and restrictions on their rights to freedoms of religious belief, expression, association and assembly."

"Several Tibetan monastic leaders, writers, protesters and activists were detained. In August [2014], Tibetan demonstrators were reportedly shot by police and security forces in Kardze (Ch: Ganzi), where a crowd gathered to protest against the detention of a village leader. At least four demonstrators died from their wounds and one protestor committed suicide in detention", the report added.

It also remarked on self-immolation protests in the past year: "Seven people set themselves on fire in Tibetan populated areas in 2014 in protest against repressive policies by the [Chinese] authorities; at least two died as result. [...] The authorities targeted some relatives and friends of those who self-immolated for allegedly 'inciting' or 'abetting' such acts."

"In some counties, family members of self-immolators, or those who have attended the Dalai Lama's teachings, were sympathetic towards the 'Dalai Clique' or had 'connections overseas', were barred from senior positions or from standing as candidates in village elections."

The report declared the number of known self-immolations since March 2011 to be 131, yet many consider the number to be as high as 134.

Amnesty International's indictments coincide with the Chinese authorities' leaked notice of "illegal activities related to the independence of Tibet" – obtained and published by the Tibet Post International on February 25 – which proves the increasingly compromised nature of Tibetan liberties under Chinese rule.