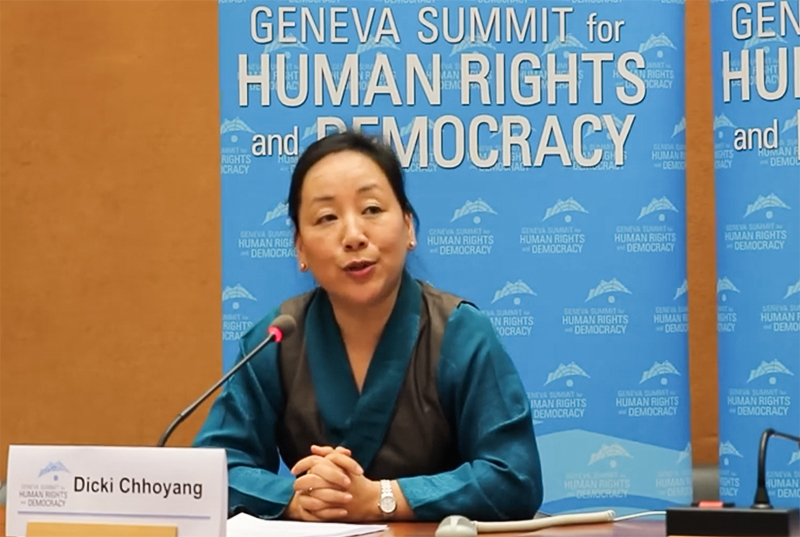 Geneva: - Addressing the 'Geneva Summit for Human Rights and Democracy 2015' held in Geneva this week, a top Tibetan official said "Tibet stands today as a symbol of a people's non-violent struggle for freedom, justice and dignity."

"There has been 135 Tibetans who self-immolated inside Tibet to protest against the People's Republic of China's policies in Tibet," said Ms Dicki Chhoyang, minister for the Department of Information and International Relations, Central Tibetan Administration, when she addressed the opening session of the Summit on 23 February.

"Those who self-immolated include people from all regions of Tibet ranging between the ages of their late teens to 60s, and nomads, farmers, monks, nuns, students, intellectuals, men and women," she explained.

'Despite the last half a century of Chinese occupation, Tibet stands today as a symbol of a people's non-violent struggle for freedom, justice and dignity,' she said.

'It is probably one of the oldest standing non-violent movements, she said, adding, amidst the many individual tales of human right violations, the story of Gedun Choekyi Nyima, one of the world's youngest political prisoners, clearly highlights the ongoing lack of religious freedom.'

She also stressed "It's the tale of a little six-year-old boy who disappeared a few days after His Holiness the Dalai Lama recognised him as the 11th Panchen Lama, one of the highest-ranking lamas for Tibetan Buddhists."

"This year marks the twentieth anniversary of him going missing. His unknown whereabouts combined with the uninterrupted reports of other extrajudicial arrests and tortures serve as a constant reminder of the Chinese government's disregard for human rights in Tibet," the minister added.

"As a representative of the Central Tibetan Administration, I serve as the voice of the Tibetan people in the free world," she added, saying: "I travel to several countries every year to raise awareness about the human rights situation in Tibet."

But she said it's more important to seek support for what China doesn't want the world to know and what China wants to keep as a secret. And that is, the Tibetan proposal to resolve the current situation inside Tibet, which is called the Middle Way Approach."

"The Middle Way Approach is based on principles that His Holiness the Dalai Lama suggested as mutually beneficial and in the spirit of dialogue and reconciliation," she said.

She explained that 'the Tibetan issue is a fight between truth and brutal force. "We are dealing with a ruthless regime, which has a formidable propaganda machine. And its way of handling Tibet is silence. Silence, as in, no information going inside Tibet and no information coming out of Tibet," she further added.