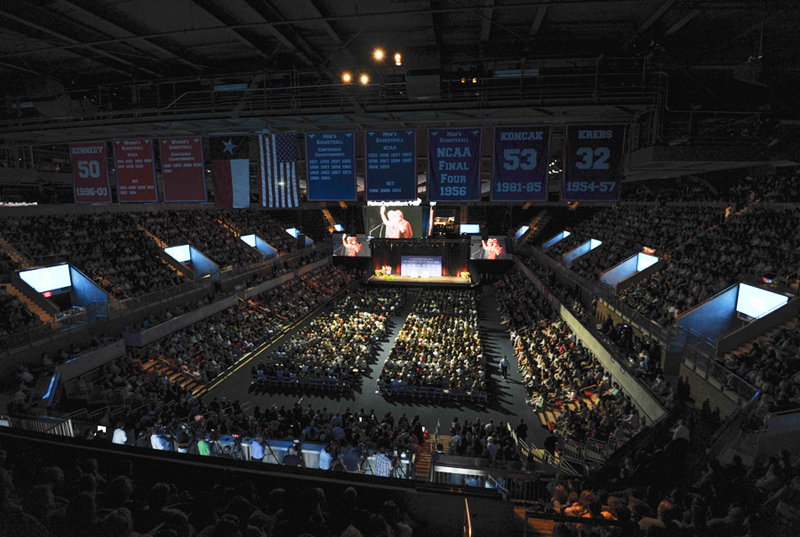 Dallas, Texas, US.  "Human's unique brains are capable of many good things, including compassion, tolerance, forgiveness, love,” the spiritual leader of Tibet His Holiness the Dalai Lama said "some of the biggest challenges we face are our own creation."

Describing himself as a simple Buddhist monk His Holiness made a special appearance in Dallas city in Texas, US, on Wednesday. He spoke as part of a forum at the George W. Bush Presidential Center at Southern Methodist University.

"Wearing an SMU ball cap, he spoke on a number of topics, but his speech was predominantly about love, acceptance and the importance of happiness," the ABC reported.

"He did not stop smiling even once during his hour-and-a-half appearance on stage," the ABC report said. Nearly 2,500 people attended the sold-out event. Among the crowd was former President George W. Bush and former first lady Laura.

"It is indeed a great honour to meet with my old friend once more and to see his new Institute and the programmes being implemented here to promote democracy and liberty. I don’t necessarily admire America for its military strength; I admire it for upholding the principles of democracy and liberty. America leads the free world. Although you have retired I’m glad to see you’re still dedicated to democracy and freedom.

“Now, we Tibetans and Burmese have linguistic roots in common and like Tibet, Burma is a Buddhist country. Within Buddhism we have the Pali and Sanskrit traditions. The Pali tradition is the fundamental tradition, while the Sanskrit tradition deals with further elaborations of, for example, the theory of selflessness. We have the monastic code in common and I’ve noticed that the monastic organization is essentially democratic in principle.

“For people to fulfill their rights they need education. Since the government in Burma remains totalitarian, you should take full advantage of this opportunity to study and learn and not become too distracted by the materialistic attractions to be found here."

He urged the crowd to "pay close attention to the principles of freedom and democracy. Examine how to combine modern ideas with traditional values. Our struggle is between the power of truth and the power of the gun. The gun may seem more decisive in the short term, but in the long term the power of truth is stronger. It’s important to be confident about this.”

The Tibetan spiritual leader reiterated that the people in power now depend on the use of force, but they can’t keep that up forever. In the long run, truth will prevail. He quoted a Tibetan saying that if you fail nine times, nine times you should try again.

The nobel peace prize laureate was asked how to unite diverse peoples under the common banner of freedom and replied that we need to have a sense of the oneness of all humanity. In a country like Burma there will be religious and ethnic differences, but what is more important is the common Burmese interest.

Questioned about how to reconcile such compromise with freedom, His Holiness responded that the European Union is an example of the kind of realistic thinking he has in mind. His Holiness said that Tibetans have historically been an independent nation, linguistically and geographically distinct.

"There are Chinese documents that refer to Chinese, Tibetan and Mongolian empires in the 7-9th centuries. Still they can be part of a larger, more economically developed state, so long as they have the opportunity to preserve their language, culture and environment."

He said that human beings are the same and equal in their right to live a happy life. He remarked that the marvelous human brain that can cultivate love, compassion, forgiveness and tolerance, is also capable of giving in to anger, hatred and fear. Consequently, many of the problems we face are our own creation.

He stressed the need for modern education to incorporate moral principles based on the simple value of warmheartedness. Since we all depend on one another, our wish for happiness requires that we cultivate concern for one another too. If we do that there will be trust between us and where there is trust, there is friendship; something essential to social animals like us.

Changing the world, His Holiness said, making it a more peaceful, compassionate place can only begin on an individual level. It’s not something we can leave to the government or the UN. He ended with an appeal that if what he had said made sense, people should think about it more, discuss it and put it into effect.

The event, which was moderated by ABC News political correspondent Cokie Roberts, was hosted by the George W. Bush Presidential Center and SMU in conjunction with the World Affairs Council of Dallas-Fort Worth.