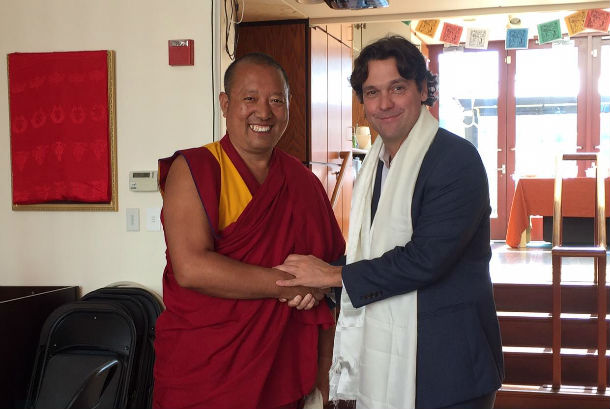 U.S. House Representative Jim McGovern delivered the opening remarks of the hearing, briefing the caucus of the history of Tenzin Delek's incarceration and known illness.

"Last April, I wrote to the U.S. State Department to encourage our government officials to prioritize Tenzin Delek's release on medical parole, because he was reported to be suffering from serious health problems.

In late June, the State Department assured me the message had been transmitted. But at the end of the day, China ignored my pleas and those of many others around the world. I want to emphasize again today that the Chinese authorities bear direct responsibility for Tenzin Delek's unnecessary death."

In his testimonial, Geshe Jamyang Nyima raised the questions of how and why Tenzin Delek Rinpoche died. A prominent Tibetan political prisoner and a highly respected spiritual figure, he died in prison under mysterious circumstances on July 12th.

At the time of his death, Rinpoche was serving a life sentence under very harsh conditions for allegedly 'causing explosions' and 'inciting separatism,' charges which he never received a fair trial or legal representation for, and that he steadfastly maintained his innocence against.

"After Tenzin Delek Rinpoche's death, his family and community asked the prison authorities how and why he died. They asked the authorities for the body of Rinpoche in order to perform Buddhist final rites as per Tibetan tradition," Geshe Jamyang Nyima stated in his testimony before the commission.

However, authorities not only withheld the body, they also prohibited any kind of religious prayers or gatherings in the region of Lithang, Rinpoche's hometown. Tibetans were banned from observing any prayers, or displaying his photographs, or lighting butter lamps, or any other religious rituals for several days.

Geshe Nyima urged the US and Europe to speak out publicly for freedom and rights in Tibet under the repressive policies of the Chinese government.

He particularly called on the US Congress to urge President Obama to raise the issue of Tibet during the President's upcoming meeting with Chinese President Xi Jinping.