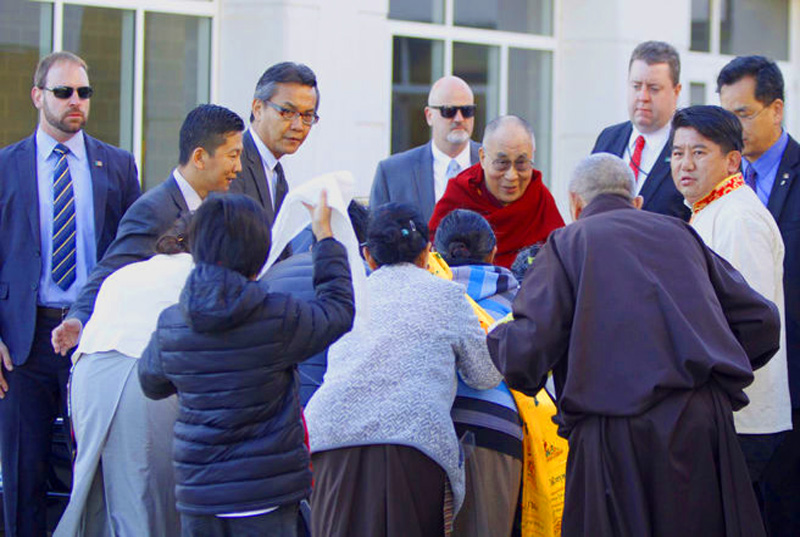 Dharamshala — During an audience with the Tibetan community in the Minneapolis area in Minnesota, The spiritual leader of Tibet His Holiness the Dalai Lama said that general health and urged the Tibetans not to worry.

Hundreds of Tibetans, wearing Tibetan traditional dress gathered at the Mayo Civic Centre in Rochester for a brief meeting with His Holiness, on Wednesday morning, 30 September, the Tibetan administration media reported.

They performed a traditional welcome dance for His Holiness the Dalai Lama, who in turn called them over, held their hands and blessed them, the report said.

Nobel Peace Prize laureate, beaming with energy and high spirits, spoke to the Tibetans for over an hour, it said, adding "He urged the Tibetans not to worry and declared that he was in good health."

Addressing the Tibetan community, His Holiness the Dalai Lama said: "As some of you may know, for the last 10 years or so, I've been coming to the Mayo Hospital almost every year for routine physical check-ups.

Even in India, I go for physical check-ups every 6 months or so at New Delhi. And that's why I'm here this time also."

"The last time I went for a check-up at New Delhi, the doctors told me that I am in excellent health with no major ailments whatsoever," His Holiness explained.

"However, for the last 2 or 3 years, I've had some minor issues with my knees. Therefore, a good friend of mine recently recommended a German doctor, who is a renowned bone specialist. "

"After examining some X-rays of my knees, the German doctor told me that these things are normal at my age. He even said to me jokingly that I am 80, not 18 anymore. I believe what he said is true. As you age, your physical body deteriorates, so you need to be aware of your health, do check-ups and take care of small issues and symptoms," His Holiness said.

"Overall, I'm very well, and there's no need for any of you to worry," His Holiness announced, drawing a huge applause from the Tibetans.

His Holiness however added that doctors have advised him to rest more as he did feel more fatigue after long trips with sustained activities as compared to before. Some of His Holiness the Dalai Lama's planned trips and activities in the next couple of months have been curtailed as a result.

"However, the remaining Lamrim teachings in South India will go on as scheduled. I am also participating in a Mind and Life conference with scientists in South India. I intend to enjoy and carry out these events in a relaxed manner," His Holiness said.

His Holiness also spoke about the importance of Tibetan language for an in-depth understanding of Buddhism and the role and responsibilities of a Tibetan during the private meeting.

He further called for the need of religious harmony in the world. "Love and compassion are the root essence of all religions irrespective of the minor philosophical differences," His Holiness said.

His Holiness the Dalai Lama arrived in the US for a series of public talks and meetings last week. However, all his US engagements have been cancelled after doctors advised complete rest for several weeks following a medical checkup.

His Holiness is currently discharged from the Mayo Clinic and will arrive in Dharamshala on 3 October.