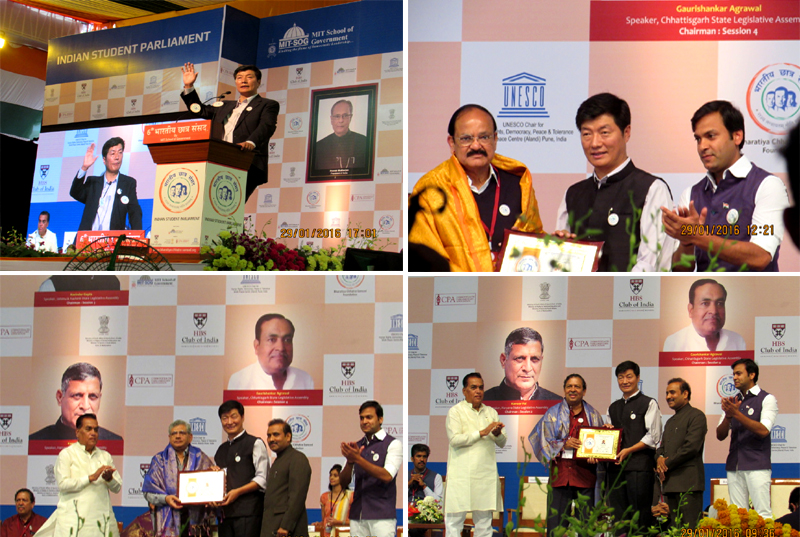 Dharamshala — Dr Lobsang Sangay, Sikyong or the political leader of Tibetans warned Friday that the ice reserves on the Tibetan plateau is also melting rapidly due to global, and which will have noticeable consequences in the coming decades.

Dr Sangay addressed over 10,000 students who have gathered to attend the four-day national conclave of Indian students, also known as Indian Student Parliament (Bharatiya Chatra Sansad) from across India at MAEER's MIT campus in Pune on Friday, 29 January, according to the Tibetan administration media.

It was the 6th conclave of the student organization, considered one of the largest of its kind in the world. Sikyong Dr Lobsang Sangay, who is also a governing member of the organisation, felicitated the other speakers including Shri Venkiah Naidu, Shri Sitaram Yechury, Shri Mahesh Bindra etc. with scarves and awards on behalf of the organisation.

Speaking on the ominous implications of global warming for the hundreds of millions of people who depend on water, Dr Sangay prophesied that wars in the future could be fought over water due to the impending scarcity of freshwater looming on the horizon.

"Earlier wars were fought over land and now wars are being fought over energy as is evident from the clashes in the Middle East. However, many experts believe future wars will be fought over water. From Maharashtra to all over India, there is a crisis of fresh water," Sikyong said.

"China has 19% of the world population, but only 11 to 12% of freshwater, meaning 7 to 8% of China's population equivalent to about 400 million people are facing scarcity of fresh water. In South Asia, including India, Pakistan and Bangladesh, the situation is even worse. The issue of farmer suicide is also intrinsically linked to water scarcity caused by drought like situations," Dr Sangay added.

However, Sikyong lamented that the ice reserves on the Tibetan plateau is also melting rapidly due to global warming which could lead to severe repercussions.

"Fifty percent of the ice and glaciers on the Himalayan and Tibetan plateau has already melted in the last few decades. As far as NASA is concerned, by 2050, another 50% of the Tibetan glaciers will melt. The glaciers in Tibet and the Tibetan plateau are the main source of fresh water for many of the major rivers of Asia from Brahmaputra, Yamuna, Ganga, Indus, Mekong to Salween, Irrawady, Yellow river," Sikyong said, adding, in that sense, what would happen to all the farmers and fishermen who are dependent on these rivers for their livelihood.

Dr Sangay also spoke about the growing interest among the public particularly in India's northeast regarding China's construction of dams on Tibet's rivers. "I went to Guwahati three years ago. I spoke there and the response to what I spoke was lukewarm at that time. However, when I visited Guwahati again last year, the locals were deeply interested in what I had to say. Because what I spoke three years ago is now coming true. The Brahmaputra River has started receding, decreasing its water quantity due to building of dams and other mega hydropower projects in Tibet," Sikyong recalled.

Admitting the necessity of globalisation, Dr Sangay called for moderation in our daily utilization of resources to decrease our carbon footprint on the planet. Sikyong emphasized the wisdom propounded by the adage, 'Think Globally, Act Locally' to remind everyone of our duties to do our bid to safeguard the environment for the health and sustainability of the earth.

"If we don't act now, globalisation will not only be an impediment, but will also be the cause of global warning all over the world particularly in Asia and India," he concluded.

Following his engagement at Pune, Sikyong flew to Kolkata where he addressed the Entrepreneur's Organisation (EO) at a session titled 'Learning Event with Lobsang Sangay' on Saturday, 30 January. The Entrepreneurs' Organization (EO) is a global, peer-to-peer network of more than 11,000+ influential business owners with 153 chapters in 48 countries.