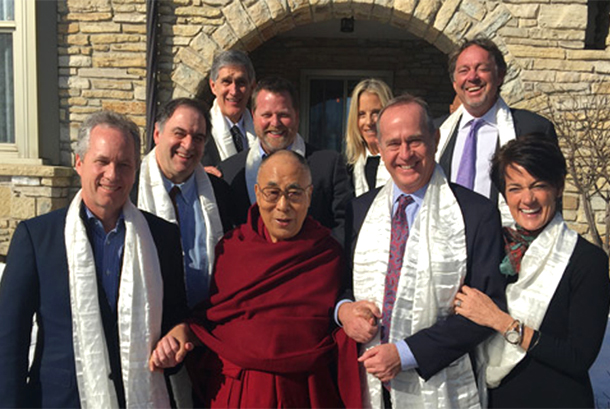 Rochester, Minnesota — The spiritual leader of Tibet, His Holiness the Dalai Lama said he is confident that leaders in the latter part of the 21st century who grow up with a human value based education system will be more compassionate.

On February 11, His Holiness met with Mayor Tom Tait of Anaheim, CA, Mayor Greg Fischer of Louisville, KY and Mayor Ardell Brede of Rochester, MN, along with several like-minded individuals who were working to build kind and compassionate cities. Anaheim had adopted the name 'City of Kindness' and Louisville had adopted the name 'City of Compassion'.

His Holiness admired the Mayors' efforts in naming their cities as cities of kindness and compassion. He felt the time had come to begin a systematic effort to develop more kind-hearted people. This method should be able to encompass all seven billion human beings irrespective of whether they were believers or non-believers.

"All children receive immense affection and love from their mothers. This is a biological factor, not based on religion. We should be able to find a way to promote these values on this level, not based on religious faith. This is what I call secular ethics. Secular in the Indian context of respecting not only religious believers but also those who do not believe in religion."

In stressing his commitment to this endeavor, His Holiness said, "I remain committed till my death in the promotion of the oneness of seven billion human beings. Whenever I look at another human beings I always see them as a fellow human being that automatically brings a strong feeling of closeness. If one considers secondary levels then you are enveloped by a feeling of loneliness."

His Holiness said he was encouraged in meeting people who showed real interest and began to realize the importance of kindness and compassion. He saw this as a hopeful sign. He also saw the United States as playing an important role in this regard.

"America is the most powerful economic country. That is commendable. Now the time has come to pay more attention about our inner richness, our inner value. I think the U.S. has great potential in this. If the U.S. is able to develop more cities of kindness and compassion and accordingly a practical human value based education curriculum, it will have an impact. Already many people realize that material progress by itself is not enough to develop a happy life."

Mayor Greg Fischer of Louisville said that during His Holiness' visit to their city in 2013, His Holiness requested him to try and introduce the concept of secular ethics in their community. Through his experience, the Mayor found that people were still a bit apprehensive when they used the word 'secular' as some people felt it was non-religious. He said that he used the word 'human values' or 'universal values' which people found much more accepting. He talked about kindness, love and compassion as basic human values.

He informed His Holiness that Louisville was implementing the teaching of these basic human values in their school system with their compassionate schools project. They had started with three schools where they were teaching young children social and emotional behavior centered around kindness, love and compassion, and mindfulness and meditation. These children came from difficult backgrounds and it was the first time in their life that they were able to slow their minds down and actually open their minds and begin learning for the first time.

After questioning whether they were bringing out any reports or carrying out any research on the effects, the Mayor Fischer informed His Holiness that they were working with the University of Virginia and were planning to test ten schools using this scientific approach and another 10 schools not using this approach to compare each other and see if there was a permanent difference.

His Holiness said, "I have been having a dialogue with a number of scientists, educational professionals and others over the last ten years. Many of them agreed that the existing educational system was not adequate enough as it was focused on material values. So there was a need to add education on warm-heartedness. However, in the beginning stages this needed to be done on a small-scale level and once the positive results became clear, then it could be expanded to include more schools and places."

"Political leaders were too busy with today's existing problems. But this effort was the solution for future problems. I am confident that leaders in the latter part of the century who grow up with a human value based education system will be more compassionate. Then the 21st century can be one of peace and compassion."

Another participant talked about their efforts in developing a kindness program for schools in Canada. They were finding that students in these kindness programs were developing skills that went way beyond the classroom. They became life skills and also took them home to their parents. They were happy to receive calls from parents saying that their 10-year old child was talking about conflict resolution at the dinner table. Parents became interested since they saw a positive effect.