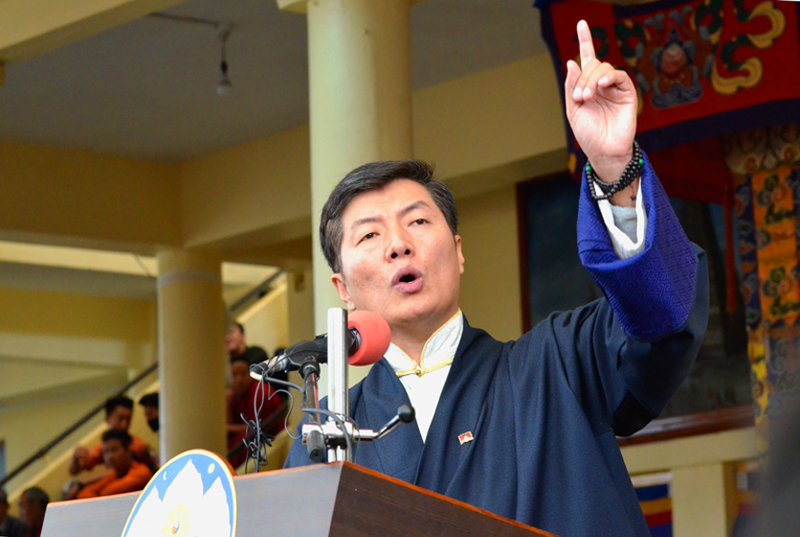 Dharamshala — To mark the 57th anniversary of the Tibetan people's national uprising day in Dharamshala, India on Thursday, March 10, Sikyong Dr Lobsang Sangay said "the situation inside Tibet is grim", stressed that "the self-immolation is further evidence of the lack of freedom in Tibet."

Thousands of Tibetans and supporters today gathered at the Tibetan temple courtyard in McLeod Ganj, India, to participate in the official commemoration of the 57th Tibetan National Uprising day. Tibetan Uprising Day is observed on March 10 to commemorate the 1959 Tibetan Uprising against the presence of the People's Republic of China in Tibet.

Speaking about the situation in Tibet, Sikyong said that "the situation inside Tibet is grim. Anyone speaking up for religious freedom and environmental rights are often charged on political grounds and are given harsh punishments."

"Mere possession of the image of His Holiness the Dalai Lama leads to arrest and imprisonment. Repositories of Buddhist culture are tightly monitored, monks and nuns face expulsion for not denouncing their spiritual leader," said Sikyong.

"The Freedom House Report 2016 has listed Tibet as the second least free place in the world after Syria. Similarly, the European Parliament in its Report on EU-China Relations, December 2015 has clearly expressed concern for lack of religious freedom and travel restrictions in Tibet," he said, adding: "Thus the Tibetan people live in fear and insecurity."

The Chinese authorities continued treatment of national minorities, including Tibetan people, have sparked disaffection and alienation. The action of a Chinese owned and operated hotel in Rebkong (Ch: Tongren), Qinghai province drew strong opposition and protest when it banned employees from speaking Tibetan language.

"On 22nd Dec 2015, a senior communist party leader of Tibetan origin expressed concern at the prevalence of discrimination at a meeting during which he referred to the recurring instances where people with ethnic backgrounds were discriminated against or denied access to certain services. He said this problem has generated unwanted social impact and caused strong public reactions from ethnic regions," Dr Sangay said.

"Similarly, the Chinese government's policy in general and the remarks of few leaders in particular have dubbed a whole ethnic group as "splittist". Such remarks have drawn sharp reactions within China from many scholars and intellectuals who have written hard-hitting responses," Sikyong added.

Dr Lobsang Sangay, has reiterated his administration's commitment to the 'Middle Way' approach and expressed that his administration firmly believe that the longstanding issue of Tibet can be resolved through dialogue. He stated that "the Envoys of His Holiness the Dalai Lama are ready to engage in dialogue with their Chinese counterpart any time and any place."

"We the Kashag of the Central Tibetan Administration firmly believe that the longstanding issue of Tibet can be resolved through dialogue between the envoys of His Holiness the Dalai Lama and representatives of the Chinese government," said Sikyong.

"We remain fully committed to the Middle Way Approach of not seeking separation from China but genuine autonomy for the Tibetan people. The Tibetan leadership strongly believes that the only way to resolve the issue of Tibet is through dialogue between the Envoys of His Holiness the Dalai Lama and the representatives of the Chinese leadership," Sikyong added.

Responding to China's claims of the right to identify reincarnation of His Holiness the Dalai Lama, the Tibetan political leader said that this is a blatant lie as the claim is based on doctored history. "The power and authority to decide the reincarnation of the Buddha of Compassion, Tibet's protector and savior, manifested in the human form, rests solely with His Holiness the Dalai Lama," Sikyong said, adding: "Nobody else has the right to do so."

Sikyong continued his speech by quoting His Holiness the Dalai Lama, "If it is decided that the reincarnation of the Dalai Lama should continue and there is a need for the Fifteenth Dalai Lama to be recognized, responsibility for doing so will primarily rest on the concerned officers of the Dalai Lama's Gaden Phodrang Trust. They should consult the various heads of the Tibetan Buddhist traditions and the reliable oath-bound Dharma Protectors who are linked inseparably to the lineage of the Dalai Lamas. They should seek advice and direction from these concerned beings and carry out the procedures of search and recognition in accordance with past tradition. I shall leave clear instructions about this. Bear in mind that, apart from the reincarnation recognized through such legitimate methods, no recognition or acceptance should be given to a candidate chosen for political ends by anyone, including those in the PRC."

Sikyong also praised exile Tibetans' active participation in the election processes, saying "Tibetan people in exile are following the great path of democracy." He said "Very soon the final round for election of Sikyong and Members of Tibetan Parliament-in-Exile will be held. Therefore, the Tibetan electorate is encouraged to participate on the election day in order to exercise the democratic rights as specified in the Charter for Tibetans in Exile."

Sikyong also touched on other aspects of the Tibet issue in the statement, including the spate of self-immolations in Tibet, the protection of Tibet's culture, democracy and environment, and the continued support from governments around the world.

"The Kashag would like to take this opportunity to remember the kindness of the leaders of various nations that cherish justice, parliamentarians, intellectuals, scholars, human rights organizations and Tibet Support Groups, who have been steadfast in their support for the Tibetan people," said Sikyong.