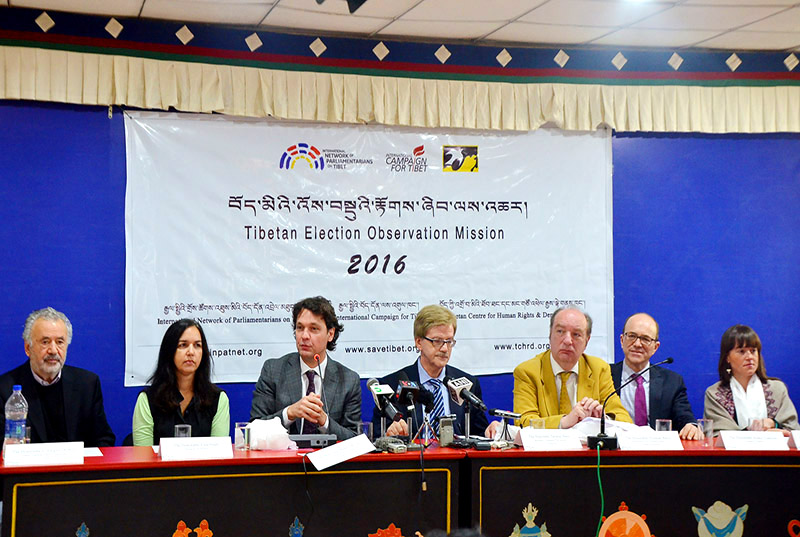 Dharamshala — The international observer missions members have praised the conduct of Tibetans' just concluded general elections and said say 'Tibetans all over the free world have once again strongly embraced democracy.'

The delegation comprising lawmakers, from the U.K, Canada, Australia and the EU held a press conference Monday in Dharamshala, India on the Tibetan Elections in exile, which took place on March 20 in over 30 countries for the election of the Sikyong (head of the Central Tibetan Administration) and for 45 Members of the Parliament in exile.

"We are pleased to see how Tibetans all over the free world have once again strongly embraced democracy as the best way to achieve the aspirations of a better future for the Tibetan people, which unfortunately continues to be denied to 6 millions Tibetans in Tibet." the The International Network of Parliamentarians on Tibet (INPAT) said in a statement issued on the same day.

"We wish to praise the Tibetan people for their commitment and enthusiasm in participating both in the campaign and in the voting process.

The lawmaker went on to say that "Voting in these elections, Tibetans in exile are reaffirming their support for a political solution, while the Chinese Government continues to impose severe authoritarian policies, which undermine the very existence of Tibetan identity."

In the statement, they said: "We call on the international community, national Parliaments, Governments and NGOs to stand behind and support an exiled community who seeks a political solution to a six decades long conflict, through the means of nonviolent actions and negotiations."

"The Tibetan elections in exile were organised by the Central Election Commission in two rounds over the course of 6 months in over 30 countries (the first round was held on October 18) and were conducted peacefully and overall in an orderly and calm manner on election day, despite logistical challenges," they said.

The statement said: "The election of the Sikyong was competitive and Tibetans had the opportunity to choose between the incumbent, Lobsang Sangay, and the Speaker of the Parliament, Penpa Tsering. The two candidates became more active after the primaries held in October 2015 and campaigned extensively in India and all over the world, where Tibetan communities are located, until the very end of the campaign period."

"We welcome that independent groups, including Tibetan language media services, which broadcast them both online and via satellite and organised three debates between the two candidates during the last three weeks of the campaign." they stated.

"We wish to stress the critical role played by independent and free media to effectively empower the public to make an informed choice at the time of the elections; this is particularly true for an exiled community dislocated in so many nations," the observer mission further said.

They said that "The elections of Parliamentarians also saw competition with an increased number of candidates for the different regions. We observed no major irregularities of the election rules."

During the course of the campaign some issues were raised both by candidates and NGOs, concerning the transparency and adequacy of some of the election rules as enacted by the Central Election Commission.

However, election observers said they will publish a final report after the announcement of the final results on April 27, saying, "we will provide an assessment with recommendations on issues including the following."
– campaign finance regulation with a particular focus on cap limits for electoral expenses;
– participation of women;
– regional voting system and the representation of religious sects in the Parliament;
– the need to ensure all Tibetans in the free world are able to vote;

The delegation thanked the Indian Government for the generous hospitality it provides to the Tibetan people enabling them to preserve and promote their culture and way of life.

"The INPAT stands ready to conduct further elections observation missions outside Tibet and we look forward to the opportunity to undertake such a role within Tibet itself."

They also expressed their thanks and appreciation to the Central Tibetan Administration and in particular the Tibetan Parliament in exile and the Central Election Commission for enabling us to conduct this Tibetan Election Observation Mission.