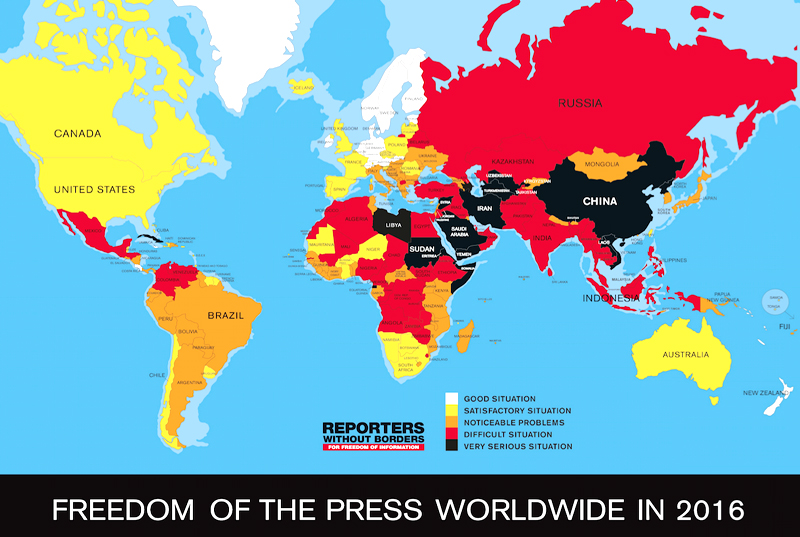 "It is unfortunately clear that many of the world's leaders are developing a form of paranoia about legitimate journalism," said Christophe Deloire, secretary-general of Reporters Without Borders, in a statement accompanying the report, on April 20, 2016.

"Today, it is increasingly easy for powers to appeal directly to the public through new technologies, and so there is a greater degree of violence against those who represent independent information," Mr. Deloire added. "Journalism worthy of the name must be defended against the increase in propaganda and media content that is made to order or sponsored by vested interests."

The World Press Freedom Index ranks 180 countries on indicators such as media independence, self-censorship, the rule of law, transparency and abuses. The global total has increased, or worsened, by nearly 4 percent since last year, and nearly 14 percent since 2013, says the anual report.

This year's report again ranks China among the world's worst freedom of press offenders with a score 80.96, behind Syria, which is ranked 177th in the world with a score 81.35.

Since 2008, the Chinese government never stopped in trying by any means it can to keep Tibet in a state of isolation from the world, by banning almost all of foreign journalists, international observers, human right activists, writers, and NGOs.

In Tibet today, Tibetan writers, intellectuals, musicians, artists, environmentalists, health-workers, and religious figures are being arbitrary arrested, imprisoned and tortured by Chinese authorities for merely posting an article to a blog, writing an essay, editing a magazine, sending information by text message, or singing songs that express the suffering of the Tibetan people.

The Freedom House, in its annual 'Freedom in the World' report release in 2016, has placed Tibet as the second worst place in the world for political rights and civil liberties. Tibet was amongst the world's 12 worst countries, in its report in 2015.

Shokjang's arbitrary arrest and imprisonment are a simple example, which highlighted the fatal violations of freedom of information in Tibet. The popular Tibetan blogger and intellectual Druklo, more widely known by his pen name Shokjang, was sentenced to three years, for writings allegedly engaging in splittist activities.

The 32-year old Tibetan, who wrote under pen name 'Shokjang' charged with leading "splittist movements" from 2008 and for writings allegedly engaging in splittist activities.

Shokjang recently has written an eloquent letter from detention appealing against his three-year prison sentence. The letter was circulated on Chinese social media, was handwritten in Tibetan and addressed to the Qinghai Higher People's Court. Before his sentence, he was arrested by Chinese police, on March 18, 2015, from a hotel in Rebkong County.

Japan slumped to 72nd due to what the watchdog identified as self-censorship towards Prime Minister Shinzo Abe, while Finland retained its top spot for the sixth consecutive year, followed by the Netherlands and Norway.

While Europe remained the region with the most press freedom, Reporters Without Borders warned that the misuse of counter-terrorist and counter-espionage measures and conflicts of interest had put it on "a downhill course".

Poland fell a massive 29 places to 49th due to government seeking to restore Polish ownership of foreign owned Polish media.

And France dropped seven places to 45th because "most of the private-sector national media are now owned by a handful of businessmen with interests in areas of the economy unrelated to the media."

In Europe threats to journalists were linked to rising nationalism which saw death threats in Sweden, which dropped three places to 8th , and attacks on journalists during anti-Muslim rallies in Germany (which dropped four spots to 16).

"And finally, it was in Paris that the attack on Charlie Hebdo took place on 7 January 2015, an attack masterminded from Yemen. So, Europe was also the victim of the world's demons," read the report.

The World Press Freedom Index, published annually since 2002, measures "pluralism, media independence, the quality of the legal framework, and the safety of journalists in 180 countries," says the report. The data come from a questionnaire, published in 20 languages and completed by experts all over the world, combined with data on abuse and violence against journalists.