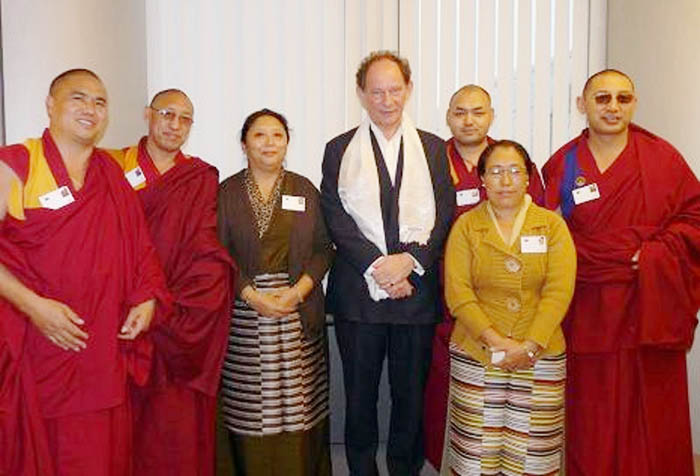 The European Parliament’s Vice-president, Edward McMillan Scott, has expressed support for the non-violent Tibetan movement, and outrage at changes in Britain’s Tibet policy.

Mr McMillan Scott was speaking at a meeting with the Tibetan Parliamentary Delegation on November 16 in the European Parliament (EP) headquarters in Brussels.

In October 2008, Britain announced it recognized Tibet as a part of China. Prior to that, it regarded China as exercising suzerainty over Tibet.

In an internet blog earlier this year, Mr McMillan Scott said, “Instead of giving the EU a lead, given Britain's earlier role in Tibet, (British Foreign Secretary) David Miliband's treacherous statement fatally undermines the position of most Tibetans, who are desperate for freedom.

In the French capital Paris earlier this month, the Tibetan Parliamentary Delegation updated the Human Rights Committee of the EP on the human rights situation in Tibet, in anticipation of the forthcoming EU-China Summit on November 30 and the EP hearing on Tibet in early December.

The delegation was received by President Thomas Mann of the EP Inter-parliamentary Group for Tibet and included Gyari Dolma, Deputy Speaker of the Tibetan Parliament-in-exile.

On November 12, the delegation was received at the French House of Deputies, by Lionel Luca and Jean Francois Humber, Presidents of the Tibet Support Group in the Lower House and Senate. They also gave a press briefing on human right issues to Reporters without Borders and Amnesty International, appealing for urgent help to improve conditions for Tibetans inside Tibet.

Before moving on to Rome for the Fifth World Parliamentarians' Convention on Tibet, the delegation met with communities of Tibetan exiles in France and Belgium, and expressed gratitude towards Tibet support groups for their work.

The Programmes were coordinated by the office of Tibet based in Brussels, Belgium.