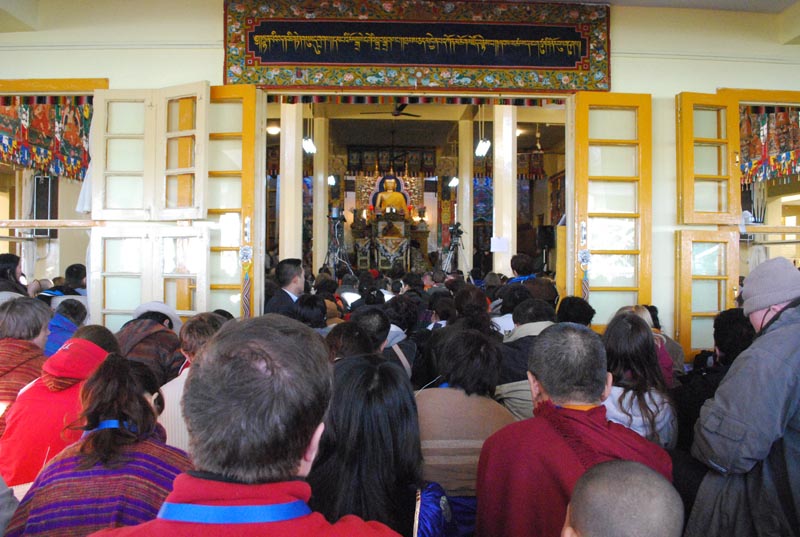 The teachings featured the Drub-Shag and the preliminary to the initiation of the Thirteen Deity Vajrabhairava. There was also a question-and-answer session, prior to which His Holiness told the audience that we must become Buddhists of the 21st century.

"We cannot develop ourselves as Buddhists simply by belief", he said, "but need to practice and study Buddhism to achieve a greater understanding."

Printed below is a selection from the open session.

Question: Is it better to pray in one's own language or in Tibetan?

His Holiness: It is better to pray in one's own language, but when Tibetans recite mantras, they do so in Sanskrit and there is no other way to recite mantras.

Question: Is it permissible for Buddhists to eat meat?

His Holiness: Some Buddhist texts say that it is not permissible to eat any meat, but others, including the Abhidharma-Kosa, say it is permissible to eat meat on the condition that the animal was not slaughtered specifically for the person who eats it. The best thing is to give up meat entirely. Sometimes one's lifestyle and circumstances provide no alternative but to eat meat, and in these cases one should eat as little meat as possible. Tibetan monasteries and nunneries in south India became entirely vegetarian 15 years ago. Festivals and ceremonies in all Tibetan monasteries and nunneries should be completely vegetarian. When I was in Tibet, aged 13 or 14, my government officially banned meat from religious festivals and ceremonies.

Question: The situation in Tibet is very bad now. What can Russian and Mongolian Buddhists do to help?

His Holiness: Usually when I travel in the US, Europe, India and Japan, I ask people to visit Tibet and research the reality of the situation, to clarify their understanding, then return home and describe what they find out to their friends and relatives. But it's very expensive to travel to Tibet, so you should borrow money from your friends before you go, then buy souvenirs in Tibet and sell them at a profit when you get home!

Question: Is it OK to be initiated into and empowered by more than one of the various sectors of Tibetan Buddhism?

Question: Can people of other religions, such as Christianity and Islam, be initiated into Tibetan Buddhism?

His Holiness: I usually tell people it's more important to respect your parents' and grandparents' religious traditions. When I visit the US, Australia and Europe, and meet Christians and Jewish people, I tell them it's better to stay with your own religion. Changing your religion is very complicated. When Buddhists maintain their grandparents' religion, it makes that religion stronger. When people ask me which is the best religion, I tell them it's difficult to say, because it depends on your personal interests which religion best suits you. These days, many Westerners who come from Christian or Jewish backgrounds are interested in Buddhism, and they are free to believe what they wish. But I tell them, before you become a Buddhist, please research the subject and please respect your own religious background

Question: Should a person on their deathbed, who prays to yourself or another lama, pray in their own language or in Tibetan?

His Holiness: It's better to pray in your own language.

Question: In Russia, we have a very precious Nyigma lama called Paldro Rinpoche. Some people say he and other lamas have received no blessing from yourself, so they do not attend their teachings. Is it OK to attend the teaching of a lama who you have not blessed?

His Holiness: (LAUGHS) I do not have any blessings to give to other people! The most important thing is to investigate for yourself whether a lama has the right credentials. I have two stories to tell you.

Once upon a time, in his previous life, Dza Paltrul Rinpoche - a very famous and highly accomplished lama - lived as a common person and wore sheepskin clothes, like a nomad. His patrons and followers visited him all the time and gave him no peace and quiet, so one day he ran away. He arrived in a new village and asked a family there to give him accommodation. The mother of the family who, because of Dza Paltrul's commoner's clothes didn't realize he was a Rinpoche, said, "You can stay with my family, but you will have to do a little work." So, the woman told the Rinpoche he had to empty her chamber pot early every morning. One day, one of the Rinpoche's students came to the village, looking for his teacher. He asked the woman if she had seen the Rinpoche. She replied, "No, there are no lamas here. What does he look like?" The student replied, "He wears sheepskin clothes," and described the shape of his face." The woman realized her family's guest was Dza Paltrul Rinpoche and, in her embarrassment, ran away.

The second story is about another humble, highly educated high lama, called Drom Tonpa. He was the reincarnation of Avalokiteshavara, the Buddha of Compassion. He also dressed in sheepskin, like a nomad. One day he crossed a mountain on his way to Lhasa. He met another traveller, dressed in monk's robes, and they walked together. After some time, the monk became very tired, took off his shoes and gave them to Drom Tonpa. Drom Tonpa tied the laces together and carried the shoes around his neck. They continued walking and, as they approached Pembo monastery, the monks came out and stood in a line to receive them. The traveller monk wondered, "Who are they preparing to receive? They don't know me." He asked Drom Tonpa, who replied, "Maybe they're expecting me." The monk was very embarrassed and ran off without his shoes!

These stories teach us not to judge by outward appearances.