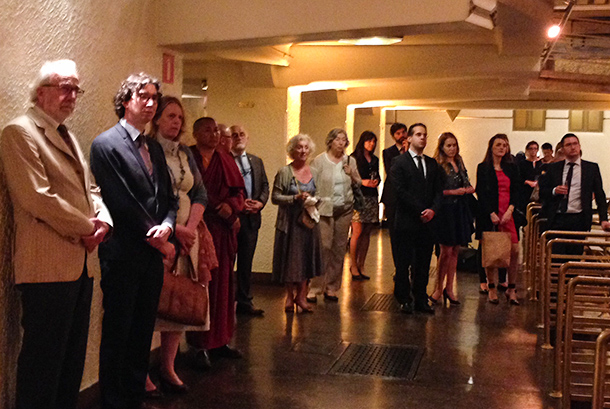 Brussels — Members of the European Parliament extended his warmest birthday wishes to His Holiness the Dalai Lama, on his 81st birthday.

“You are and you will be a role model of a peaceful human approach in every situation of life," said Mr Thomas Mann, a German MEP from the European People’s Party, the biggest Political Group in the European Parliament and the Chair of the Tibet Interest Group (TIG).

"For your 81st birthday, we promise to continue our work here in the European Parliament in Brussels and of course in Strasbourg”, Mr Mann said on Thursday July 5 2016.

“Since 15 years, I am privileged to be leader of European parliamentarians who support your middle way approach, Your Holiness the Dalai Lama. Every year we celebrate your birthday in Brussels last week in the very famous Albert Hall. I am happy to say that our work as a cross party group reaches visible results."

"In February 2014, we celebrated our 100th TIG meeting with 300 participants all over the world. We fight against torture, suppression and illegal imprisonment. In December 2015, the European parliament passed a report on the EU China relations."

"We successfully integrated a large number of amendment about the human rights situation, environmental pollution and the law on counter terrorism. We published statements about the Tibetan uprising on the 10 March 2016 and we were present during the demonstration on the Schuman square in Brussels.”

“As president of Tibet Interest Group, I was a member of a International Election Observing Mission to Dharamshala, together with parliamentarians from three different countries. I spent one week in the political capital of the Tibetans in exile.

"The overall impression was that the Tibetans hold their elections democratically, professionally and with great passion. A personal high was ofcourse, the private audience of our team with you holiness.”

“For your 81st birthday, we promise to continue our work here in the European parliament in Brussels and of course in Strasbourg. Again, Happy birthday Holiness and Tashi Delek,” Mr Mann said in a video message to His Holiness the Dalai Lama on his 81st birthday.

The bureau du Tibet, Brussels, held its annual reception at the Albert Hall Complex, a flagship event venue in the heart of the European quarter, June 30 to celebrate the 81st birthday of the spiritual leader.

The Nobel Peace Prize laureate has stated repeatedly that he is not seeking independence for Tibet. "We are not seeking independence. Yet Chinese history books record the existence of three distinct and equal empires - China, Mongolia and Tibet - in the 7th, 8th and 9th centuries," His Holiness told NHK television, in Osaka, Japan on May 9, 2016.

"However, that is the past. Now we are looking to the future. I admire the spirit of the European Union in which members accord greater importance to the common interest than national sovereignty," he said, adding: "We need greater material development in Tibet and China can help us with that, provided we can keep our own language and traditions alive."