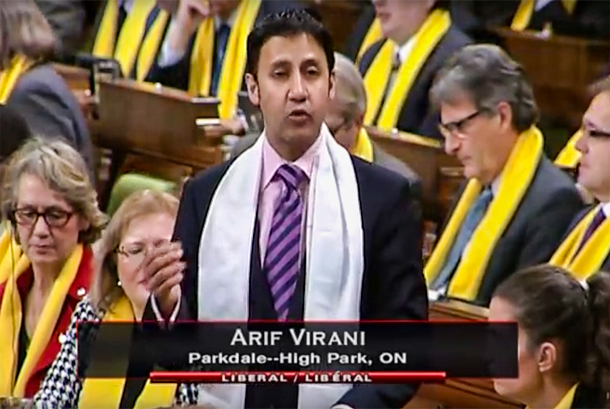 Dharamshala — A Canadian Parliamentarian has condemned the Chinese government for the ongoing demolition of Larung Gar, one of biggest Buddhist institutions in Tibet.

Mr Arif Virani who is also the chair of the Canadian Parliamentary Friends of Tibet (PFT) expressed his serious concern at the ongoing demolition of the Larung Gar monastery in eastern Tibet, according a report by the Central Tibetan administration based in Dharamshala, India.

"I am devastated to learn of the demolition. Over 5000 resident monks and nuns have now been displaced. They have not just lost their home and their religious community but their sense of belonging and safety," he said.

"My thoughts are with Tibet and members of the Tibetan diaspora around the world who are now even more committed to their pursuit of Buddhist studies. I know the spirit of Larung Gar and the Tibetan people will remain strong," he added.

He also voiced his grief over the death of the Tibetan nun Rinzin Dolma, who reportedly took her own life on July 20, unable to bear the demolition of her institution.

The Canadian MP, who has previously raised Tibet issue in the Parliament, to commemorate the 57th anniversary of the Tibetan national uprising. "On March 10, 1959, thousands gathered in front of the Potala Palace, in Lhasa, to rise up against injustice in Tibet. That year, His Holiness the Dalai Lama, an honorary citizen of this country, and 100,000 other Tibetans, became refugees," he said.

"His Holiness and thousands of other Tibetans are now seeking a path of return. They are pursuing an approach called "the middle way". The middle way seeks nothing more than greater autonomy for Tibet within China," Mr Arif Virani said, adding: "It is an approach that would peacefully resolve the issue of Tibet and bring about stability and co-existence between the Tibetan and Chinese people based on the concept of equality and mutual co-operation."

"It saddens me greatly that in a desperate attempt to raise more awareness about the cause of Tibet, 151 persons have self-immolated. Those deaths should never have been necessary," Mr Arif Virani stressed.

"On the 57th anniversary of the 1959 uprising, it is up to all of us to focus on raising awareness about the Tibetan cause," he added.

Monks and nuns have watched helplessly as Chinese demolition teams have rolled into Serta County in eastern Tibet,' RFA's source said, speaking on condition of anonymity. They begun tearing down their homes at the Larung Gar institution, one of the world's largest monastic institutions with a population of over ten thousand Buddhist practitioners.

A similar crackdown at Serta Larung Gar was reported in 2001 and thousands of homes were dismantled by over 500 armed police and military personnel. Witnesses at the time said that huts were demolished with possessions and shrines still inside and demolition teams were seen to drag elderly and disabled residents out of their homes before destroying their homes, in some cases demolitions began while the owners were still inside. This crackdown is believed to have led to the expulsion of 8,000 practitioners and the demolition of 1,874 monastic residences and 2,000 meditation huts.