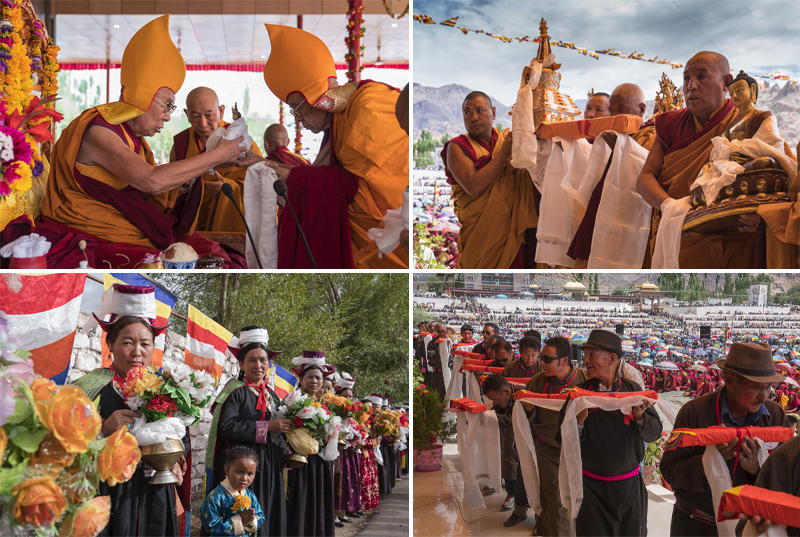 Leh, Ladakh, J&K, India — Speaking about his own efforts, the spiritual leader of Tibet, His Holiness the 14th Dalai Lama urged everyone to be more compassionate and sincere that we are all brothers and sisters belonging to one human family. Thousands of devotees offered 'Tenshuk prayers' for his long life and good health, on Sunday.

"The more we practice altruism and help others, the more we will benefit ourselves. The resultant peace of mind helps us live longer, able to serve humanity longer," His Holiness the Dalai Lama told the gathering, continuing his teachings on Shantideva's 'A Guide to the Bodhisattva's Way of Life', in Ladakh, J&K, India, August 21, 2016.

The Nobel Peace Prize laureate recommended that devotees pray with a good motivation to live longer in order to have greater opportunity to practise the Buddhadharma, cultivate bodhichitta, and attain Buddhahood. "Right from childhood we are under the influence of destructive emotions. We have an instinct to harm others, to kill insects and so forth, due to our past karma and being habitually driven by negative attitudes," His Holiness said.

"From the beginning, we are accustomed to being ignorant about reality and adopt a self-cherishing attitude. Now, due to encountering the teaching of the Buddha, we are awakening from the slumber of ignorance. Therefore, we should try to generate the awakening mind of bodhichitta. In the immediate short term it will bring us peace of mind and better health, while in the longer term it will ensure that we take a higher rebirth."

Thousands of devotees including monks and nuns, led by Ganden Tri Rinpoche, performed ceremonial prayers for His Holiness's long life and good health. On behalf of the entire people of Ladakh, Ladakh Buddhist Association President Tsewang Thinles expressed thanks to His Holiness for coming and showering his blessings on them. He further requested His Holiness to visit Ladakh again and again in the future.

"Every living being needs happiness including animals therefore, respecting others and understanding their problem create happiness," the spiritual leader said while expressing about the benefits of Bodhitta. He said the spirit of awakening motivates the Bodhisattava way of life and explains the means of cultivating and sustaining this altruistic aspiration.

Mentioning about the cause of suffering the spiritual head said those desiring to escape from suffering hasten right toward suffering. He satisfies with all joys those who are starving for happiness and eliminates all the sorrows of who are afflicted in many ways.

"Every prayer does not depend upon faith, prayer has to be understood properly and we should have a clear mind and spirit to attain teachings," His Holiness said in his sermon.

Appealing the devotees particularly the monks and nuns not to have blind faith without studying Buddhist scriptures and philosophy, he said, adding wearing robes of monks and adhering to monastic ritual may help in the propagation of Dharma teachings but it won't help in substance of Buddhism to have a meaningful life.

"From the beginning, we are befriended with ignorance about reality of things and we absorb self cherishing act now due to Buddha teaching, we are awakening from sleep of ignorance," he said, adding "we should practice Bodhichitta, the altruistic thought to help other to focus on enlightenment of Buddhahood.

The spiritual leader reiterated that Buddhism has connection with science and said that in the twentieth century scientists focused on externalmatter but towards 21st century, scientists also started giving importance to internal emotions, which affects, the physical aspect of our body.

"These prayers made with great faith and devotion will help me live longer, giving me the opportunity to work for the welfare of all sentient beings,"His Holiness said, responding to their request that His Holiness will visit Ladakh in the near future again.

On 21st August, the last day of the four days of public teachings, His Holiness conferred an Avalokiteshvara empowerment. In the preamble he encouraged Buddhists among his listeners to adopt a vegetarian diet and curtail their use of alcohol. The spiritual leader of Tibet urged everyone to be more compassionate and sincere and to recognise that "we are all brothers and sisters belonging to one human family."

His upcoming schedule include a four-day teaching on the second chapter of Nagarjuna's The Precious Garland of the Middle Way (uma rinchen trengwa) from August 29 to September 1 at the main temple Tsuglagkhang, McLeod Ganj, India.

From September 9 to 11, he will attend a Mind & Life Dialogue on Power and Care with leading experts in science, economics and religion, at the Bozar Center for Fine Arts, Brussels, Belgium. Following the conference, he will give a public talk on Individual Engagement and Global Responsibility at the Palais 12, Brussels Expo – Belgium.