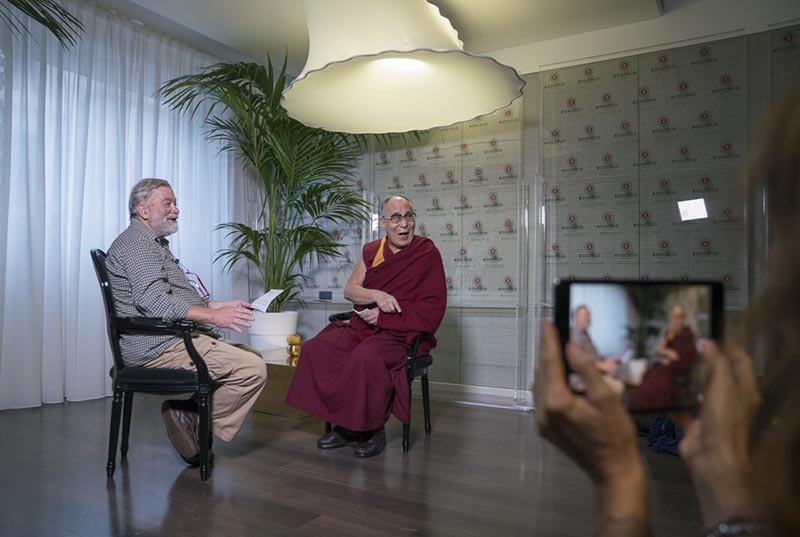 Milan, Italy — The Chinese leadership wants 'Tibet to disappear as a unique culture and as a language' and 'a meeting is impossible at the moment,' the spiritual leader of Tibet, His Holiness the Dalai Lama said, speaking of relations with the Chinese government.

During one of his final mornings in Milan, Italy on on October 21, 2106, His Holiness the Dalai Lama gave an interview to an old friend, Pio d'Emilia for SkyTG 24, a prominent Italian news agency.

Beginning the interview, d'Emilia opened his questions with an inquiry about whether His Holiness's health is still good. "Yes," he told him, "but I'm getting older and sometimes late in the day I feel tired. However, I regularly get 8-9 hours' sleep a night, so I wake fresh every morning."

Regarding Chinese accusations that he is a splittist, His Holiness remarked, "Historically, Chinese documents show, there were three empires, Chinese, Mongolian and Tibetan. After 1951 as we tried to come to an arrangement, we signed the 17 Point Agreement, a precedent followed by no other Chinese province. In the 60s we raised the issue of Tibet at the UN to little effect.

"In the 70s we realized that ultimately we would have to enter talks with the Chinese government and in 1974 formally declared we were not seeking outright independence, but the implementation of rights for minorities guaranteed in the Chinese constitution."

There is a number of Chinese people,  particularly Chinese Buddhists very eager to see me and receive teachings. However, the government level, the concerned officials are still hardliners.

"The Chinese leadership still consider me as a troublemaker and splittist and sometimes they even described me as a demon. According to hardliners' hope, they wants Tibet to disappear as a unique culture and as a language, but it is very very difficult to eliminate Tibet," the Tibetan spiritual leader said, adding that "a meeting is impossible at the moment".

"In ancient nations, Han Chinese brothers and sisters are pride people, similarly we Tibetans also quite are people," His Holiness said, adding: "Many Chinese people realised the richness of Tibetan Buddhism."

Regarding his traveling to Tibet or China, His Holiness stated that since 1954 he has expressed a wish to go to Wu Taishan on pilgrimage, which he would still like to do.

d'Emilia asked if the world should be worried about China and His Holiness told him that China is an ancient country, a Buddhist country, but it is also presently a totalitarian state where many people are isolated from reality. Some of its leaders are realistic, whereas others continue to take a hard line. About Xi Jinping His Holiness remarked that it is hard to say. His family is Buddhist. His father, who His Holiness knew, was friends with the late Panchen Rinpoche. His Holiness admires his efforts to tackle corruption.

Prompted to comment on not being invited to the recent reprise of the inter-religious meeting in Assisi, His Holiness made clear that he feels meeting the general public is more important and can be more effective than meeting leaders.

d'Emilia pressed him about his successor and after establishing once again that it will be up to the Tibetan people to decide whether they want to recognize another Dalai Lama, he mentioned several options for this to be done. One is for him to nominate someone already alive to be his reincarnation, another is for his successor to be elected, or for a senior lama to take on the responsibility on the basis of seniority, much in the way the Ganden Tripa is chosen. Conceding that he has been urging women to take more leading roles in promoting love and compassion, he remarked that if a likely young girl were to declare she was the Dalai Lama, "Then, why not?"

Noting that the Japanese Emperor has suggested he might abdicate and one Pope has already resigned, His Holiness was asked if he considered doing so too. He replied, "I've already retired from political responsibility. I suppose I could resign from being a monk, but I don't think I could ever resign from being Dalai Lama."

Regarding whether His Holiness plans to meet with the Pope, His Holiness replied, "Yes. I have already contacted him for a meeting, but it's not yet fixed. It is just a question of time, when we will meet, but yes. It is my duty, to all very important, special religious leaders."