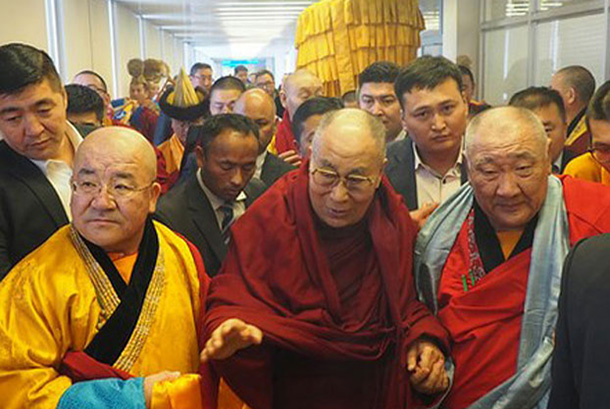 Dharamshala  — Amid political tension between China and Mongolia following the Dalai Lama’s visit to the Mongolian capital Ulaanbaatar and the cancellation of an important bilateral talk, China has allegedly also imposed additional fees on commodity deliveries between the two countries.

The new fees were apparently introduced Thursday and apply to shipments of copper and coal at several checkpoints in the Chinese territory of Inner Mongolia.

Authorities in charge of Gants Mod crossing in Inner Mongolia have imposed the new fees and according to its notice, a transit fee of 10 yuan will be charged on vehicles each time they pass through the border, and an additional charge of 8 yuan per tonne will be imposed on any goods that they are delivering.

Gants Mod crossing (China) and the Gashuun Sukhait crossing (Mongolia) are the major border crossings between the two countries used by some of Mongolia’s major mines, including Erdenes Tavantolgoi, Tavan Tolgoi and Oyu Tolgoi mine.

According to mining analysts, around 900 trucks pass through Gashuun Sukhait every day and around 133,000 tons of copper concentrate is delivered into China every month via the crossing.

A Chinese provincial document states the new charges are "mainly for the repayment of principal and interest of bank loans taken out for port infrastructure construction as well as port facilities maintenance, management and other normal operating costs," however the true motive seems called in to question after Chinese complaints following the visit of the Dalai Lama and the cancellation of pending bilateral talks.

China’s Foreign Ministry Spokesperson Geng Shuang did not confirm whether it is related to the Dalai Lama’s visit, saying he was unaware of the situation.

The Mongolian government says the additional charges on coal would coast $12 million annually.

Though the monk who hosted the Tibetan leader clarified that the visit was purely religious and separate from politics, this play from China could be seen as a consequence for geo-political misstep of Mongolia for inviting the Dalai Lama.

The Tibetan spiritual leader visited the capital of Mongolia for a four-day visit from November 18th.