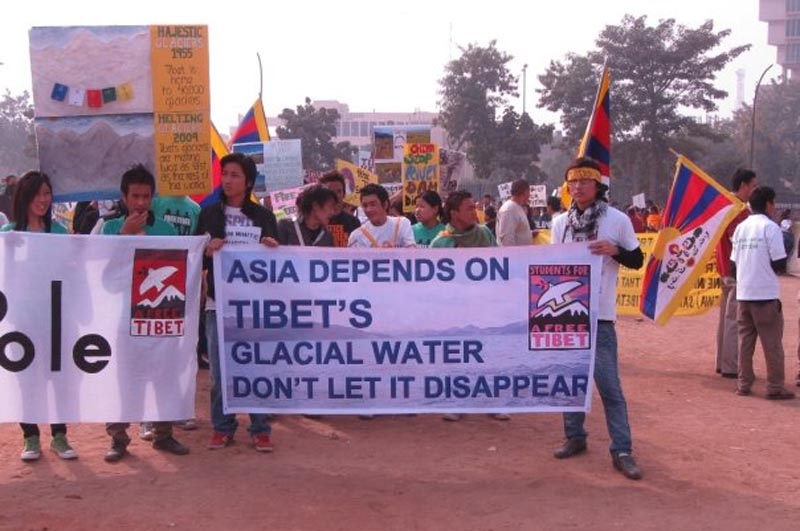 Dharamshala: "The Impacts of Climate Change on the Himalayan Plateau of Tibet: A Synthesis of Recent Science And Tibetan Research" was released by the Environment and Development Desk of the Central Tibetan Administration on December 10, 2009, following the 2009 United Nations Convention on Climate Change, held in Copenhagen, Denmark. According to the executive summmary of the report, it is "the first by Tibetan scientitsts and social scientists to comprehensively survey the full range of scientific findings on all aspects of climate change on the Tibetan Plateau."

The report is a compilation of 150 research reports that were recently published by various scientific journals. It states that "Tibet is in trouble, as climate change is now happening faster than in many areas." This statement is in correlation with the Copenhagen Conference's naming of Tibet as the "third pole."

The rate of climate change due to Tibet's high elevation (4-8 km above sea level) will affect the livelihoods of the high population in Asia, which depend on streamflows from Tibetan rivers and monsoons that are regulated by weather patterns in Tibet.

Since the Chinese occupation of Tibet began in 1959, "Huge areas of forest were cut for export to China; dozens of destructive, unregulated artisanal gold mines scarred the Tibetan earth and rivers, and now large scale industrial mining of copper, gold, chromite, oil and gas extract Tibetan resources for Chinese industry. The damming of Tibetan rivers, commercial fishing of Tibetan lakes, draining of wetlands, introduction of invasive alien species all compromise Tibet's ability to remain a carbon sink." In layman's terms, Tibet now emits more carbon than is contained in the organic matter of the ecosystem.

Before the Chinese occupation of Tibet, the Tibetan agricultural and nomadic lifestyles had little impact on the land and climate. Each spring and summer, the rapid rise of temperature in Tibet creates lower air pressure, and brings rainclouds into central Asia. The resulting precipitation feeds subtropic Asia. Changing temperatures and increased melting in Tibet could create a surplus of rainfall and waterflow in other parts of Asia.

The Environment and Development Desk of the Central Tibetan Administration also held a screening of the film, "Meltdown in Tibet" on December 9th, which takes a close look at melting glaciers and permafrost in the Himalayas, and on the Tibetan Plateau in particular.