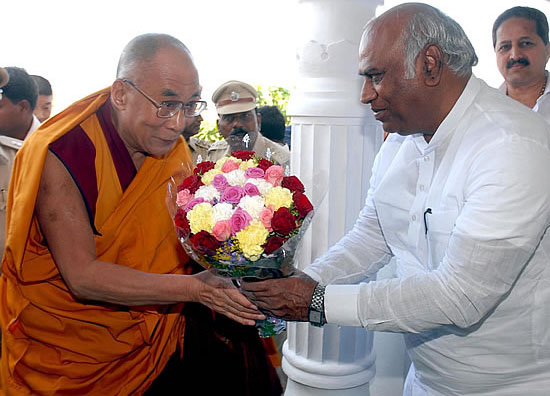 Maharaja Sayajirao University and the city will receive a special guest on its campus in January The Times of India reported yesterday. Tibet's spiritual and political leader, His holiness 14th Dalai Lama of Tibet has confirmed.

His Holiness's will be at the Gujarat-based university to attend the International Conference on Buddhist Heritage. Accompanying him will be Prof Samdhong Rinpoche, Prime Minister of the Tibetan exile government.

400 Tibetan monks from within India and abroad, and over 250 representatives of various states, will also be converging in the city for the conference, which begins on January 15. Of 144 topics selected for the conference, 45 contributions are from the United Kingdom, USA, Japan and Sri Lanka.

"This is a very ambitious and special event to be hosted by MSU, and it becomes all the more important with His Holiness consenting to be present at the conference. We have yet not decided on showcasing Lord Buddha's ashes, unearthed by the Department of Archaeology and Ancient History during an excavation drive at the Devni Mori site, near Shamalaji. But a special arrangement will be made for His Holiness the Dalai Lama so that he can have a glimpse of the treasure," said the university’s vice-chancellor, Ramesh Goyal.

The four-day conference will be inaugurated by Chief Minister Narendra Modi, and the Indian government has already sanctioned Rs 1 crore to host this seminar. Goyal explained, “There will be a series of seminars and lectures, as well as cultural performances. A musical troupe from Himachal Pradesh will be coming to perform and faculty member from performing arts Dr Parul Shah from MSU will make a presentation.”

A gala exhibition is also planned for the conference, which is aimed at promoting Buddhism tourism. "We will be putting two sets of exhibitions. One will be aimed at promoting sites in Gujarat from which Buddha's belongings have been excavated. A second display will be at Archaeology Department that will show material found during excavation drive. Even items relating to Indus Valley civilization will be displayed in the exhibition. It was our department that brought to light Buddha's link to the state," Goyal shared.

The Tibetan spiritual leader is coming to the city for the first time in seven years. His Holiness was last there to take part in the Swaminarayan Mahamantra bicentenary celebrations at Sokhada.