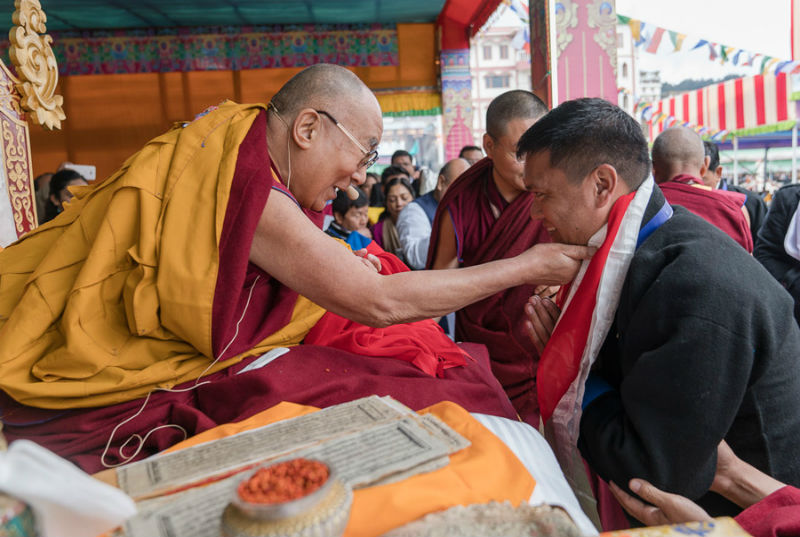 CM Khandu said on Wednesday it was a brave decision on the part of the spiritual leader to take the arduous trip, according to media reports.

The spiritual leader of Tibet, His Holiness the Dalai Lama arrived in Arunachal Pradesh on Tuesday for a week-long visit on the invitation of the Indian state government.

China has been warning India against allowing the 81-year-old Tibetan leader to visit Arunachal, which it claims to be part of south Tibet, for almost a month now, saying it will cause "serious damage" to bilateral ties.

Khandu said: "Let me get this straight. China has no business telling us what to do and what not to do because it is not our next-door neighbour."

He explained that the McMahon Line, in reality, demarcates the boundary between India and Tibet. Arunachal Pradesh shares a 1,080km stretch of this line.

China claims about 90,000 square kilometres in Arunachal Pradesh. Several rounds of talks have failed to make progress on the dispute, though there have been relatively few confrontations in recent years.

Tibetans seeking freedom of Tibet from China's "oppressive rule" have a similar view.

Many in Arunachal Pradesh disapprove of India's acceptance of the McMahon Line as the 'India-China border'. The department of border management of the ministry of home affairs says India's border with China is 3,488km.

Khandu, who escorted His Holiness the Dalai Lama in a convoy of SUVs from Guwahati to Bomdila involving an eight-hour drive, said it was a brave decision on the part of the spiritual leader to take the arduous trip.

"He wanted to reach Tawang anyhow, and the weather could not deter him. Let's hope his followers in Arunachal Pradesh get satisfaction from his discourses," Khandu said before His Holiness the Dalai Lama began the first of a series of spiritual teachings at Bomdila on Wednesday morning.

The chief minister said His Holiness the Dalai Lama has been India's most venerated guest since 1959, and Arunachal Pradesh – for nostalgic and religious reasons – deserves his visit more than anywhere else.

Hundreds of Tibetans, including writers, bloggers, singers and environmentalists, have been arbitrarily detained or punished with lengthy jail terms, after attempting to express their views or share news of the situation in Tibet with the outside world, and provides further evidence of a widespread crackdown against free expression in Tibet.

Tibet was invaded by Communist China, starting in 1949, Beijing calls a "peaceful liberation". Since that time, over 1.2 million out of 6 Tibetans have been killed, over 6000 monasteries have been destroyed— the acts of murder, rape and arbitrary imprisonment, torture and cruel, inhuman and degrading treatment were inflicted on the Tibetans inside Tibet. But, authorities in China still claim that "China 'peacefully liberated' Tibet, and that the Tibetans are living in a "Maoist socialist paradise."