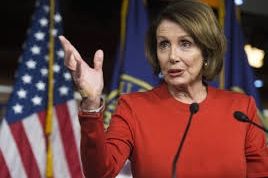 Dharamshala — Just days before the first meeting of United States President Donald Trump and Chinese President Xi Jinping, House Democratic Leader Nancy Pelosi sent a letter to President Trump, urging him to raise the issue of human rights in China to President Xi in support of those persecuted for their religious and political beliefs.

“Since Tiananmen Square, attention has focused on China’s dismal human rights record. Under President Xi, it has worsened. China persecutes the faithful, removing 1,200 crosses from churches and other buildings, in some cases destroying places of worship entirely, and arresting those who resist. It suppresses activists who support democratic reform in Hong Kong, imprisons human rights lawyers, and perpetrates disappearances and torture.”

“President Xi’s government works to control and eliminate the Tibetan culture and religion, including through the gross mistreatment of nuns and monks and even the demolition of the Larung Gar monastery. The Dalai Lama is revered for his spirituality across the world, which has led the Chinese government to fear him and imprison those who express respect for him.”

“The violations of human rights in China and Tibet challenge the conscience of the world. If we are to be true to our values, we cannot ignore that challenge nor forget the long list of those imprisoned for their religious and political beliefs, including Nobel Peace Prize winner Liu Xiaobo.”