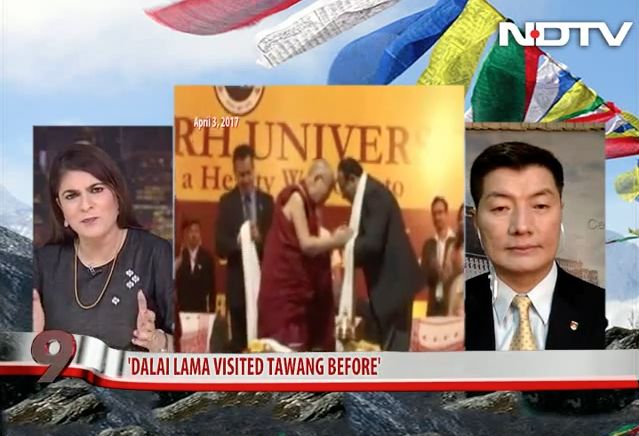 Dharamshala — “These are clear signs where things that happened behind closed doors before is now done in open, in that sense the government is just letting the fact be seen by public,” the democratically elected Tibetan Prime Minister said in an exclusive interview with NDTV this week.

Recent events like President Pranab Mukherjee hosting the Tibetan spiritual leader, His Holiness the Dalai Lama at Rashtrapati Bhavan and this high-profile visit indicate the Narendra Modi government has now moved to an ‘open door policy’ regarding their interactions with His Holiness the Dalai Lama despite Chinese disapproval unlike earlier, suggest Sikyong Dr Lobsang Sangay.

“These are clear signs where things that happened behind closed doors before is now done in open, in that sense the government is just letting the fact be seen by public,” Sikyong said on the shift of engagements of His Holiness the Dalai Lama and the Indian government under PM Modi.

Regarding Beijing’s objection to His Holiness’ visit to Tawang, Sikyong said, “His Holiness has visited Tawang and Arunachal Pradesh before. At the request of thousands of followers, His Holiness is visiting there to bless them. So in Bomdila, Dirang and Tawang, he is simply making spiritual teachings to his followers. So China is making mountain out of a molehill and saying you are hurting the sentiments of Chinese people. These are the usual drama or the rhetoric that they use and this time it’s against India. Each time His Holiness meets global leaders they do the same. “

“Kiren Rijiju ji is a friend and he is Buddhist. CM Pema Khandu is also Buddhist. So for them to see His Holiness is a commitment like me; it is not only for this life but for next life also. This is how we think. There are also followers who are very faithful to His Holiness and they are going there as residents and citizens of Arunachal Pradesh to seek his blessings.”

Supporting His Holiness’ recent statements on the Tibetan situation under Chinese authoritarian regime, Sikyong said, “It’s true, the regime in China is an authoritarian regime, there is lack of democracy and freedom of speech. If Chinese government really wants to demonstrate there is democracy and freedom in Tibet and with the Tibetan people, they should allow UN experts or Internationals diplomats to visit freely and asses the human rights situations. The fact that they don’t allow these things to happen, the fact that they repress the Tibetan people even now, reflects that clearly China is an authoritarian and Tibetans are being repressed. So what His Holiness said is right.”

His Holiness the Dalai Lama is currently in Dirang, and is scheduled to travel to Tawang tomorrow.