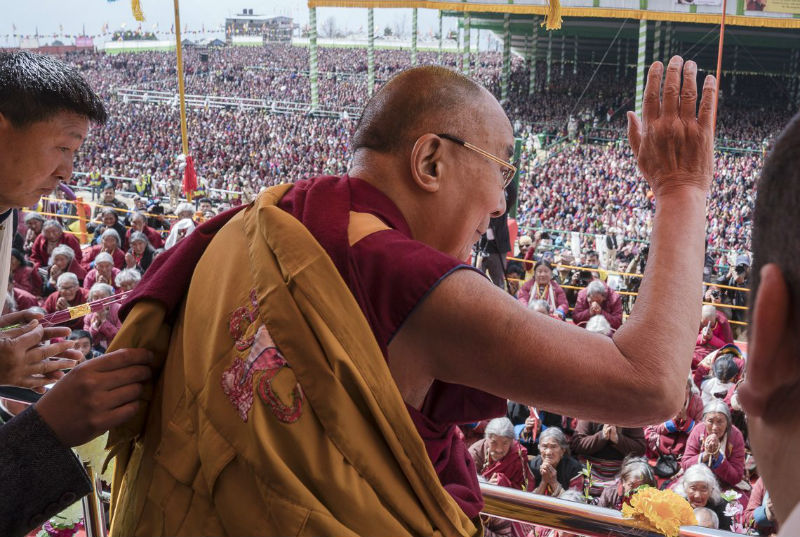 Tawang, Arunachal, India — The spiritual leader of Tibet, His Holiness the Dalai Lama said that it's up to the people of Tibet to decide whether the institution of Dalai Lama exists in the future even as he described China's bid to name his successor as "illogical" and "nonsense".

On Sunday afternoon, April 8, 2017, His Holiness met with members of the press, by telling them about his commitment to promoting human values, principally compassion.

The 82-year-old Nobel Peace Prize Laureate told them that scientists' conclusion that basic human nature is compassionate is a sign of hope that would be absent if it was anger instead.

Tibetan spiritual leader told reporters that he lamented that modern education is too oriented to material goals and insufficiently concerned with inner values. He announced that later this month he will meet with co-compilers of a curriculum for inculcating secular ethics in school and university students. He also voiced his support for religious harmony and his admiration for the way it has long flourished here in India.

His Holiness also mentioned having devolved all his political responsibilities to a democratically political elected leadership, but remaining keenly concerned about Tibetan ecology and keeping Tibetan culture and language alive.

China's interest in the Dalai Lama's reincarnation, His Holiness felt, was illogical unless it first recognises the reincarnation of Mao Zedong and Deng Xiaoping.

"If the Chinese government wants to be involved in this they should first announce their acceptance of the theory of reincarnation. Then they should recognise reincarnations of Mao Zedong and Deng Xiaoping for their claim to have any legitimacy."

The Dalai Lama said there have been discussions that the Chinese government should finalise his successor. "That I say is nonsense. In the past, Chinese emperors did have involvement in the reincarnation of some lamas but they were disciples of certain Tibetan lamas," His Holiness reported in Tawang, where over 50,000 Buddhist devotees attended his teachings.

When it was suggested that the people of Tawang would dearly love to have a Dalai Lama born amongst them again, His Holiness responded that there are people who say the same thing in Ladakh and even in Europe too.

He reiterated that as early as 1969, in his March 10th statement, he had made it clear that whether or not there should be another Dalai Lama was up to the Tibetan people. He accepts that if they decide that it is an institution that is no longer relevant, it will cease. He expects Tibetan refugees, Mongolians and people of the Himalayan region from Ladakh to Tawang to have a say in this decision.

His Holiness the Dalai Lama also mentioned that later this year he may resume discussions with prominent Tibetan spiritual leaders on how to proceed. He admitted that he has answered the question about whether a future Dalai Lama could be a woman with his own question, "Why not? There are already precedents of high female reincarnations."

He repeated a response he first gave in Newark some years ago, taking off his glasses and challenging his questioners, "Look at my face. Do you think this talk of my reincarnation is urgent?"

On whether his visit to Tawang, a place Beijing claims as its own, will affect India-China ties, he said: "We will have to wait and see. But it is normal for China to give political colour to my spiritual visits."

But his visit to Arunachal Pradesh, he felt, should not have angered China because "the whole world knows I am not seeking the independence of Tibet". He added: "I wish Chinese officials would accompany me during my visits to find out if I am doing or saying anything against them."

"In 1959, the situation in Lhasa was desperate and slipping out of control. I tried to resolve the situation without success. Since 1956 the PLA had used military force to effect change in Do-mey and Do-kham and we had run out of means to mollify them," he told the huge crowd of devotees.

His Holiness said that Prime Minister Nehru organized help from the point where I crossed the border. "I met him first in Beijing and later in India in 1956 and had discussions with him about the situation in Tibet. When I had to flee Lhasa in 1959, it was only once I crossed the border into India here that I felt free of risk and danger. The local people showered me with respect and devotion and treated the many Tibetans who came after me with immense kindness."