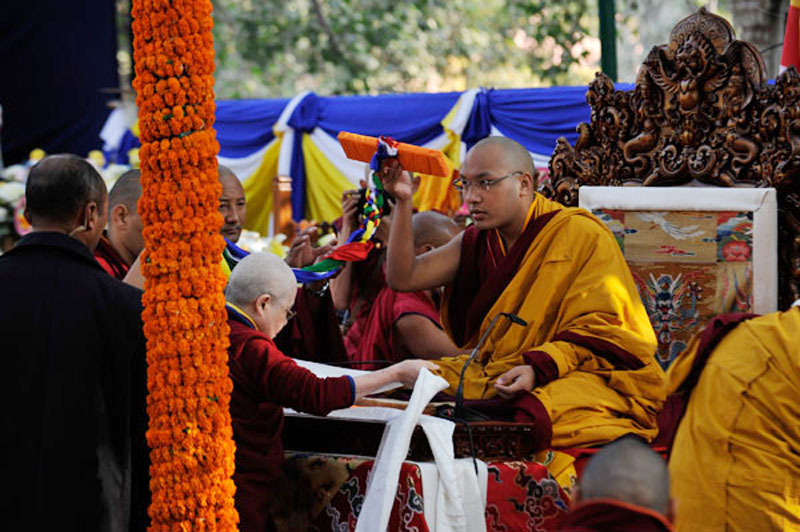 Bodhgaya: As the four day 27th International Kagyu Monlam Chenmo prayer ceremony took place in Bodhgaya  on 24 December, thousands of disciples spent the day offering their voices, hearts and minds to generate aspirations for the well-being of the world. Along with those who traveled from over 52 countries to attend in person, many more participated from their homes, since this year's Kagyu Monlam is being webcast live at kagyumonlam.tv with the prayers and teachings transmitted in eight languages, including English, French, German, Polish and Russian.


On 24 December, 17th Gyalwang Karmapa told the story of the life of Milarepa to the moment of his passing into nirvana. He then gave advice on how to use adverse conditions for spiritual growth, using the example of a common situation faced by foreigners attending Monlam in Bodhgaya-physical ailments and sickness. His Holiness indicated several ways to make such problems fruitful for Dharma practice. For one, we can use sickness to deepen our recognition of the teachings on death and impermanence. We can also reflect that by undergoing that particular form of suffering, we are experiencing the result of negative karma we created in a past life. We can consider that had we not faced it now, that Karma, in all likelihood, would have ripened in a much more painful form in a future life. Contemplating in this manner can even allow us to face painful situations with a sense of joy. As His Holiness noted in an earlier day's teachings, our suffering is a potent means of deepening our renunciation. 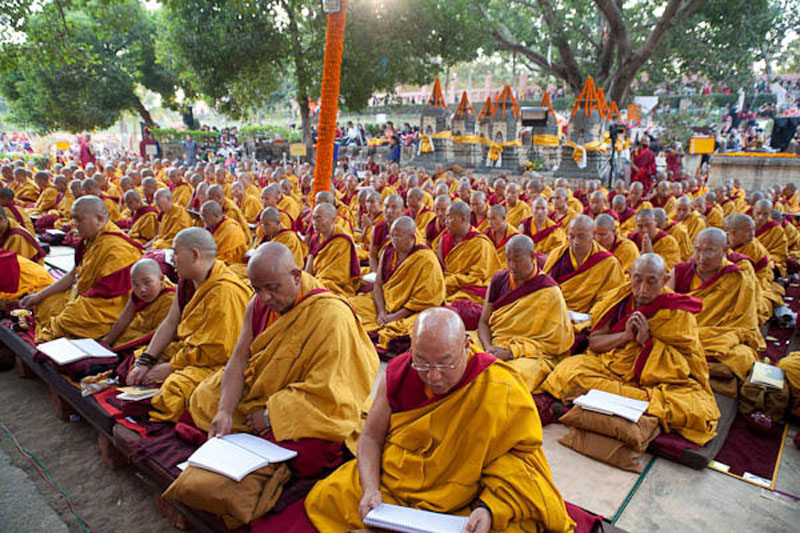 Quoting a verse from Aryadeva's Four Hundred Verses, His Holiness said that, for bodhisattvas, there is not much difference between samsara, with its many problems, and nirvana, which is entirely free of problems. All the difficult situations that arise in samsara have a completely different meaning for those with bodhichitta, since the main aim of bodhisattvas is to work for the welfare of others. His Holiness observed that when some people hear that it took Buddha Shakyamuni three countless great eons to accumulate the merit needed to become enlightened, they feel this is too long to wait. But in fact, whether they have reached enlightenment or not, the principle aim of bodhisattvas is simply to benefit others, and so their orientation before and after enlightenment is the same. Bodhisattvas' main goal is not to become enlightened; their main goal is to free others from suffering and bring them to happiness.

The third session of the prayer ceremony was devoted to Tara, a female buddha who embodies enlightened action. His Holiness began the session with an explanation of the Praises to Twenty-One Taras, a prayer that he noted crosses all boundaries and is widely practiced in Tibet by members of all schools of Buddhism. Following that, His Holiness granted an audience to all the members of Friends of Kagyu Monlam, personally signing and offering each and every member a copy of the Medicine Buddha practice text in English, Chinese and Tibetan that was prepared especially for this year's Monlam.