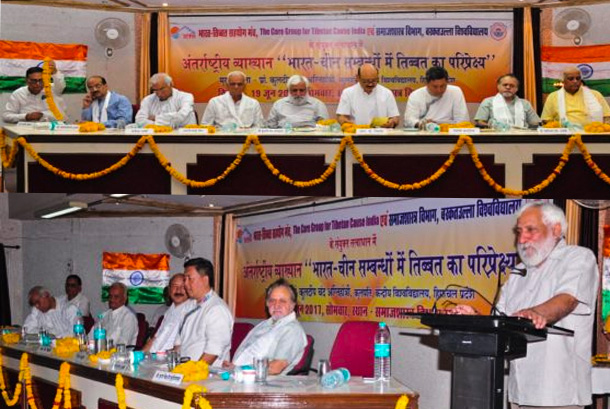 In his address, the chief guest Shri. R. K. Khrimey, a practicing Buddhist from Arunachal Pradesh, stated his complete faith in His Holiness the Dalai Lama and devotion to his teachings of reconciliation through compassion, non-violence and middle way approach. "It is our firm belief that His Holiness the Dalai Lama took refuge in India to restore the cultural heritage of Tibet. It is the dream of the Tibetan people that His Holiness will be able to return honorably to Tibet."He reiterated the responsibility of the Indian Government and of every Indian to ensure that His Holiness's dream of returning to Tibet with all his people is realized within his liffetime. "Moreover, we the people of Arunachal Pradesh are of the firm belief that Arunachal Pradesh is part of India and never have been part of China. Historically, we shared the border with Tibet from where the 6th Dalai Lama left Tawang for Tibet and 14th Dalai Lama fled Tibet for India through Tawang," he said, noting that India has already gone to war with China in 1962 over stewardship of Arunachal Pradesh and the validity of the controversial McMahon Line.

Prof. Yajneshwar Shastri reminded those in attendance of the traditional geographical roots of India by quoting an obscure term, "Jambudeweep" which refers to five modern nations that were encompassed within this territory, namely: India, Myanmar, Laos, Vietnam and Cambodia. He stressed that nowhere in the scriptures is it mentioned that India ever shared its borders with China, but there are significant references to the ancient kingdom of Tibet. Therefore, he concluded Tibet can be termed as India but never can be defined as China because there is no significance of any elements that enshrines the similarities between these nations.

While endorsing the cultural importance and diplomatic shortcomings of previous governments of India, Prof Kuldeep Agnihotri noted that the people of Tibet have regarded India as a spiritual land which is why in every narrative of India in Tibetan literature, there is always a prefix of 'Great', 'Arya', 'Deva' and so forth. For many Tibetans, the symbol of nationalism is not the land but the Dalai Lama himself. As a result of the Dalai Lama's escape from China when he got to know of Chairman Mao's plan of his incarceration in 1959, the Chinese leaders felt as if they won the war but lost the battle.

Prof Agnihotri mentioned that when Dalai Lama was in India at the invitation of Mahabodhi Society of India in 1956, he was already concerned about the threat arising from China's expansionist policy and cultural revolution. Additionally, many of the then great leaders like Sardar Patel, Dr B. R. Ambedkar went on record to warn Pandit Nehru about China's draconian approach towards its own citizens and stressed upon the need to sustain India's peaceful neighborhood with Tibet and Pandit Nehru did not pay heed to these views but rather suggested to a young Dalai Lama that "you should learn to live with China". It is historically significant to note that His Holiness responded to Pandit Nehru by telling him that "we have been living with China already but now it is for you to start living with China", thereby showing his wisdom and foresight.

The welcome address of the seminar was presented by Prof Arvind Chauhan and the thank you Note was given by Shri Shashi Bhai Seth, a distinguished Social Activist in Bhopal.