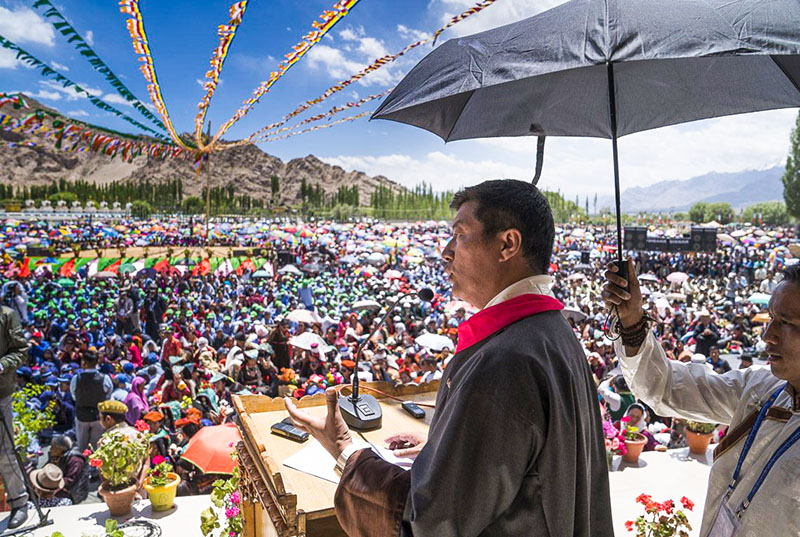 Leh, Ladakh, J&K, India — Thousands of devotees joined in the 82nd birthday celebrations of their spiritual leader His Holiness the 14th Dalai Lama in Leh, the capital of Ladakh, in northern India on July 6, 2017. Large crowds donning traditional dresses began assembling on Thursday morning at the Shiwatsel Phodrang complex on the outskirts of Leh for the celebrations.

President Dr Sangay also expressed deepest reverence to His Holiness the Dalai Lama on behalf of the Kashag and Tibetans from around the world.

The President went on by remembering His Holiness' early life and homeland, saying, "Born in the village of Taktser, Amdo (Eastern Tibet) to a peasant family on July 6, 1935, His Holiness was enthroned at the tender age of five and began his primary education at the age of six. However, the red Chinese invaded Tibet and the Tibetans turned to their only hope, His Holiness the 14th Dalai Lama. He took the reins of Tibet's political leadership at a tender age of 16 when even his religious studies were underway."

"The young Dalai Lama strived for a harmonious concord between Tibetans and Chinese while also seeking to affect change and reforms through the formation of a reforms committee. Tibetans are bound to His Holiness through a lifetime of positive karma and collective merit. We are forever indebted to his 60 years of spiritual and temporal leadership," he added.

He expressed how people of Tibet celebrate His Holiness' birthday, through their prayers and with a strong spirit. "Every peace loving people across the globe, including and especially us Tibetans are celebrating this joyous occasion today. Tibetans in Tibet, due to added restrictions cannot celebrate His Holiness' birthday but they are celebrating it in spirit-by remembering him in their hearts and through prayers for his long life."

"His Holiness established the CTA and steered the Tibetan polity through a series of legislative and administrative reforms toward what it is today- a full-fledged democratic entity admired by many across the globe. His Holiness has therefore led the Tibetan people to the right trajectory despite many trials and tribulations. His Holiness has devolved all of his administrative and political authority to a democratically elected leadership directly elected by the Tibetan people. However, as per his commitments he continues to be a free spokesperson for all Tibetans."

"His Holiness' unwavering and unquestioned love for every sentient being is like that of a parent's love for a child. We owe him a debt of gratitude and this can never be paid even in a hundred eons. Our devotion and faith in him will be peerless and remain unparalleled. Therefore it is of utmost importance for each and every Tibetan to put into practice the invaluable advice of His Holiness," Dr Sangay said.

"Since his recent visit to the United States, His Holiness has assured us of good health. But we must remember that the upkeep of His Holiness' good health will depend much on the collective karma of the Tibetan people. We should therefore make concerted efforts in achieving the same."

The statement also strongly emphasised on Tibet's latent aspirations, which were naturally linked to the question of Tibetan culture and national identity. "The three main commitments of His Holiness are- promotion of human values, promotion of religious harmony and protection of Tibetan culture and environment. His Holiness has made consistent efforts to make the Nalanda tradition's major classic texts on psychology and dialectics available for study. He has time and again stressed the importance of realizing the benefits of studying this ancient tradition, which the Tibetans have kept alive for thousands of years."

"His teachings are not only significant and relevant for ardent devotees but also to people of different faith and beliefs. They engender the sharpening of psychological and analytical skills thus bringing rational and peaceful approach to solving problems. His Holiness has consistently advocated for the inclusion of secular ethics- the basic human values of love, compassion and altruism in the modern education system and the development of the head and the heart."

He said that "His Holiness has for the past 30 years met with eminent scientists to initiate significant discourses, predominantly on Buddhist philosophy. It has resulted in many scientists taking interest in the same. His Holiness has also travelled to over 70 countries championing the cause of peace and compassion. He was awarded the Nobel Peace prize in the year 1989 and has over 150 other titles and honors to his credit. He has gained the admiration and affection of people from around the world."

"It is therefore deplorable that the Chinese government views His Holiness, whose sole mission in life is to promote the betterment of humanity, as a threat. The Chinese government has not succeeded in forestalling the noble efforts of His Holiness. People across the globe: all age groups, nationality, faith and all walks of life revere him. This is evident from the public reaction to his recent visits to the Northeastern state of Arunachal Pradesh and to the United States," the statement added.

"In autumn this year, we will witness a change in Chinese leadership during the 19th Party Plenum. After March 2018, President Xi Jinping will begin the second term of his Presidency. It is clear that China cares for its global standing and image and one of the most effective ways to gain global respect is to protect the basic human rights and freedom in China and Tibet and in particular start dialogue with Tibetan representatives," the president said, adding, "The Kashag expresses concern over the deteriorating health of Chinese Nobel Peace Laureate Liu Xiaobo and urge the Chinese government to immediately grant Liu Xiaobo and his family permission on humanitarian grounds to travel abroad for medical treatment."

The statement also emphasised on Tibetan struggle for freedom, which His Holiness also always lays stress on in all his addresses. "In Tibet, more than a million Tibetan lives have been lost for the cause of Tibet. Since 2009, the world witnessed 149 self-immolations in Tibet including four self-immolations (Pema Gyaltsen, Wangchuk Tseten, Chakdor Kyab and Jamyang Losel) since March this year. Every self-immolator have called for 'freedom inside Tibet' and 'the return of His Holiness the Dalai Lama to Tibet.' It is therefore time that the Chinese government should address the legitimate grievances of the Tibetans inside Tibet."

Dr Sangay said that Tibet's just and non-violent struggle for freedom has gained the support and solidarity of peace and freedom-loving people and governments around the world. "The bi-partisan congressional delegation led by leader Nancy Pelosi and the representatives of Members of European Parliament during their recent visits to Dharamshala have urged for the resumption of dialogue between the envoys of His Holiness the Dalai Lama and the representatives of the Chinese government. We express our deepest appreciation to them and seek their continued support until a resolution to the Tibet issue is achieved."

President Dr Sangay thanked the 37 members of the United States Congress who urged President Donald Trump to immediately appoint the Special Coordinator for Tibetan issues. "Similarly, we urge President Trump to meet with His Holiness the Dalai Lama as the previous Presidents of the United States have done. We also urge President Trump to support the Middle Way Approach and dialogue between the envoys of His Holiness the Dalai Lama and the representatives of the Chinese government. We thank the Secretary of State Rex Tillerson for expressing his support for dialogue. We also thank Terry Branstad, the U.S Ambassador to China for calling on China to provide meaningful autonomy for Tibetans and cease the restrictions on Tibetan religious, linguistic, and cultural practices."

The President strongly expressed his deep gratitude to to the Indian people and Government of India for their unflinching support for Tibet and its people. "On this most special occasion we extend our deepest gratitude to the citizens and Government of India for their continued hospitality and unflinching support towards the Tibetan people. We also express our sincere thanks to all the friends of Tibet and freedom loving people across the globe who support the cause of Tibet."

Finally, on behalf of people of Tibet, President Dr Sangay offered his prayers for the long life of His Holiness the Great 14th Dalai Lama and for the benefit of all sentient beings. "May all his wishes be fulfilled. We hope and pray that the non-violent cause of Tibet will prevail."