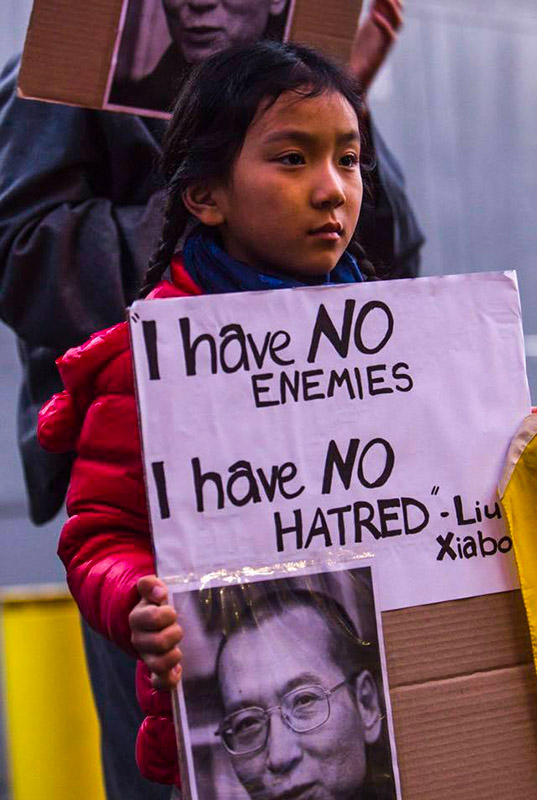 Dharamshala — Nobel Peace Prize Laureate Liu Xiaobo, China's most prominent political prisoner who co-authored a petition known as "Charter 08" calling for sweeping political reforms in China, died Thursday at a hospital in the country's northeast. He was 61.

Condolences from leaders around the world poured in as soon as the news of Liu's demise spread. He was being treated in Shenyang, Liaoning province, at the First Hospital of China Medical University. He was also the only living recipient of the prize to still be in custody.

Fellow Nobel Peace Prize Laureate, His Holiness the Dalai Lama expressed deep sadness over the death of Chinese Nobel laureate Liu and offered condolences to wife Liu Xia and family. "I am deeply saddened to learn that fellow Nobel Laureate Liu Xiaobo has passed away while undergoing a lengthy prison sentence. I offer my prayers and condolences to his wife, Liu Xia and to other members of his family," His Holiness said.

"Although he is no longer living, the rest of us can best pay honor to Liu Xiabo by carrying forward the principles he has long embodied, which would lead to a more harmonious, stable and prosperous China." His Holiness concluded by saying, "It is my belief that Nobel Laureate Liu Xiaobo's unceasing efforts in the cause of freedom will bear fruit before long."

Mourning his death, German Chancellor Angela Merkel called Liu a "courageous fighter for civil rights and freedom of expression" and President of Tibet said he was "heartbroken" after hearing the news of Liu's passing. The French, British, US and many other governments have expressed their condolences and called on China to allow Liu's family to move around freely.

The leader of the Norwegian Nobel Committee which, to Beijing's ire, awarded Liu the peace prize in 2010, said the Chinese government bore a heavy responsibility for his death. "We find it deeply disturbing that Liu Xiaobo was not transferred to a facility where he could receive adequate medical treatment before he became terminally ill," said former Norwegian Bar Association president Berit Reiss-Andersen.

The President of the European Commission Jean-Claude Juncker and the President of the European Council Donald Tusk said in a joint statement that they had learned of Liu's death "with deep sadness" and that "We appeal to the Chinese authorities to allow his wife, Ms Liu Xia and his family to bury Liu Xiaobo at a place and in a manner of their choosing, and to allow them to grieve in peace."

The UN High Commissioner for Human Rights, Zeid Ra'ad Al Hussein, said that "The human rights movement in China and across the world has lost a principled champion who devoted his life to defending and promoting human rights, peacefully and consistently, and who was jailed for standing up for his beliefs. Liu Xiaobo was the true embodiment of the democratic, non-violent ideals he so ardently advocated."

Foreign Secretary Boris Johnson called Liu a "lifelong campaigner for democracy, human rights and peace", and said that his death was a huge loss. He further stated that "Liu Xiaobo should have been allowed to choose his own medical treatment overseas", and called for the Chinese authorities "to lift all restrictions on his widow, Liu Xia".

The US Secretary of State said he mourns 'tragic passing' of Nobel laureate Liu, who died "promoting peaceful democratic reform." "I join those in China and around the world in mourning the tragic passing of 2010 Nobel Peace prize laureate Liu Xiaobo, who died while serving a lengthy prison sentence in China for promoting peaceful democratic reform," the statement cited Tillerson as saying.

"My heart breaks to hear of Liu Xiaobo's passing. I have been following the reports very closely. I on behalf of Tibetans inside and outside Tibet offer my condolence and wish his wife Liu Xia much strength and resolve in these difficult times." said President Dr Sangay.

"On a positive note, I am inspired by the growing number of true democrats like Liu Xiaobo in China. The tide of democracy is gradually touching the shores of China and I am optimistic that Liu Xiaobo's vision of a truly democratic China will be realised soon in the near future," President Sangay continued.

Speaker of the Tibetan Parliament-in-Exile, Ven Khenpo Sonam Tenphel expressed his sadness over the demise of the veteran activist Liu Xiaobo while undergoing a lengthy prison sentence. “I am deeply saddened by the news of the demise of Nobel Laureate Liu Xiaobo yesterday. I offer my deepest condolences to his surviving family members and friends, especially to his wife Mrs Liu Xia. A veteran activist and a champion of democracy, Mr Liu Xiaobo embodied the hope for Chinese democracy. He won the Noble Peace Prize despite all the inefficacious attempts to obliterate his efforts by the Communist Chinese government."

"His demise is not only a huge loss for his wife and family members but also an irreparable loss to all of us, who dare to dream a freer and more peaceful world, where everyone could co-habit with each other with harmony, stability and prosperity. On behalf of all the Tibetans, both inside and outside Tibet, I can but only join in solidarity to offer my prayers for the departed soul and hope that the vision he so preciously cherished, a noble ideal in his heart, be one day soon realized in China.”

Close friends said they were barred from visiting Liu during his treatment, and he and his family were kept in isolation, watched around the clock by state security agents.

Liu's wife, Liu Xia, as well as friends and members of the international community appealed repeatedly and unsuccessfully to the Chinese government to allow the dissident to go overseas for medical treatment, but Chinese authorities insisted he was receiving the best care possible for a disease that had spread throughout his body.

Liu had been hospitalized for advanced liver cancer diagnosed in prison in May this year. In an online announcement, the judicial bureau of the city of Shenyang, the communist totalitarian regime of China said he died of multiple organ failure.

"On July 10 he was put into the rescue and intensive care status. One July 13, he died due to multiple organ failure," the judicial bureau said in a statement.

Liu was imprisoned for the first time in connection with the 1989 Tiananmen Square pro-democracy protests. He was awarded the Nobel Peace Prize in 2010 while serving his fourth and final prison sentence, for inciting subversion by advocating sweeping political reforms and greater human rights in China.

"What I demanded of myself was this: whether as a person or as a writer, I would lead a life of honesty, responsibility, and dignity," Liu wrote in "I Have No Enemies: My Final Statement," which he had hoped to read out in court when being sentenced in 2009. He was not permitted to do so and received an 11-year prison sentence.

He came to prominence following the protests in Tiananmen Square, which he called the "major turning point" in his life. Liu had been a visiting scholar at Columbia University in New York but returned early to China in May 1989 to join the movement that was sweeping the country and which the Communist Party regarded as a grave challenge to its authority.

When the Chinese government sent troops and tanks into Beijing to quash the protests on the night of June 3-4, Liu negotiated with the army, allowing hundreds of students time to leave the square. The following military crackdown killed hundreds, possibly thousands, of people and heralded a more repressive era.

Liu became one of hundreds of Chinese imprisoned for crimes linked to the peaceful demonstrations. It was only the first of four stays in prisons owing to his political ideology.

His final prison sentence was for co-authoring "Charter 08," a document circulated in 2008 that called for more freedom of expression, human rights and an independent judiciary in China. Although Liu wasn't the initiator, he was a prominent force behind it and already well known to the authorities.

Charter 08: A call for change in China, a country which is currently under a communist totalitarian regime.

Liu was sent to prison in part for helping draft a manifesto calling for political change in China. Charter 08 advocates a whole series of reforms that would result in a separation of powers, a new constitution and legislative democracy. It says the Chinese Communist Party's approach to modernisation has been "disastrous".

If its suggestions were introduced, it would mean the end of the current political system that the party has fought so hard to maintain. Charter 08 was issued in December 2008 to coincide with the 60th anniversary of the adoption of the United Nations Universal Declaration of Human Rights.

It took its inspiration - and its name - from Charter 77, a political document written in Czechoslovakia at a time when it was under the Soviet Union's sway. Charter 08 is divided into three parts; the first looks back at China's recent history, the second outlines the authors' fundamental principles, the third presents a list of suggested reforms.

Its verdict on the last 61 years of rule by the Communist party is damning. "The political reality, which is plain for anyone to see, is that China has many laws, but no rule of law," it reads, according to a version translated by Perry Link, a US expert in Chinese studies.

It declares that the decline of the current political system has reached a point where change is no longer optional. The authors' fundamental principles laid out in the charter's second section include ideas such as freedom, human rights, constitutional rule and republicanism.

It recommends competitive elections for important official positions. "Democracy is a modern means for achieving government truly 'of the people, by the people and for the people'," the manifesto says, echoing words used by US President Abraham Lincoln in the Gettysburg Address.

The main part of the document details 19 reforms the authors advocate. They include suggested changes to the political system, such as a separation of powers and an independent judiciary. It wants the crime of inciting the subversion of state power to be abolished - the very crime that Liu Xiaobo was convicted of in December last year.

Charter 08 also calls for genuine freedom of expression. "We should end the practice of viewing words as crimes," it declares. It also advocates reforms to the education system, which the authors believe helps underpin the party's rule in China.

"We should abolish political curriculums and examinations that are designed to indoctrinate students in state ideology and to instil support for the rule of one party," it says. Some of the reforms suggested, such as freedom of speech, are already supposed to be guaranteed by China's existing constitution.