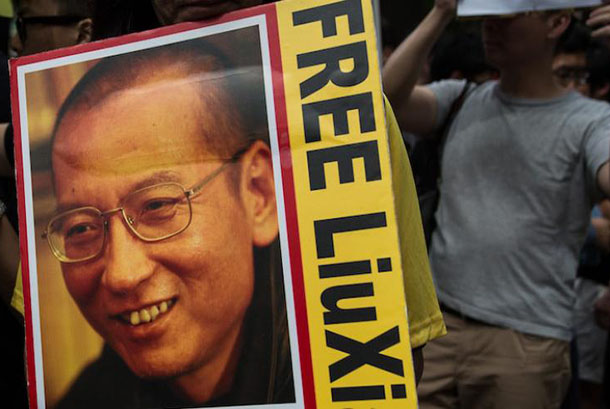 Paris, France — The Paris-based international media watchdog, "Reporters Without Borders" (RSF) is deeply saddened by the news of the death of Chinese writer Liu Xiaobo, who was the 2010 Nobel peace laureate and 2004 RSF press freedom laureate. RSF holds the Chinese authorities responsible and urges them to end the house arrest of his wife, Liu Xia.

The embodiment of resistance to oppression and the fight for free speech in China, Liu Xiaobo died July 13, less than three weeks after the announcement that he had been moved from a prison in the northeastern province of Liaoning to a nearby hospital with final-stage liver cancer. Chinese writer Liu Xiaobo, who was the 2010 Nobel peace laureate and 2004 RSF press freedom laureate, had been imprisoned since 2008.

The Chinese authorities refused to allow him to leave the country to receive medical care abroad, although an international campaign had been urging this. On paper, he had been "released on medical parole" but in practice he was isolated in the hospital and subjected to the strictest surveillance.

"It is outrageous that the Chinese authorities waited until Liu Xiaobo's cancer was in the terminal stage before treating him in hospital," RSF secretary-general Christophe Deloire said.

"It is hard to believe the Chinese prison authorities were so incompetent as to not notice a cancer developing in such a high-profile detainee as Liu Xiaobo. As well as arbitrary imprisonment, the Chinese leaders and their accomplices are guilty of murder by lack of care. We call for the immediate release of Liu Xiaobo's wife, Liu Xia, whose house arrest is clearly detention by another name."

Responsibility of the Chinese state apparatus

RSF first accuses Hu Jintao, who was president when Liu Xiaobo was arrested and tried, and his successor, the current president, Xi Jinping, a predator of press freedom. Other senior Chinese leaders must also be held responsible: Prime Minister Li Keqiang and his predecessor Wen Jiabao; Wu Aiying, who was justice minister at the time, and his successor, Zhang Jun; and the other members of the Standing Committee of the Central Political Bureau of the Communist Party: Zhang Dejiang, Yu Zhengsheng, Liu Yunshan, Wang Qishan and Zhang Gaoli.

By allowing Liu Xiaobo and thousands of other human rights defenders to be imprisoned, these leaders constantly trample on the constitution of the People's Republic of China, which explicitly guarantees free speech and media freedom. They are supposed to implement this constitution at the highest level.

But pointing the finger at the most senior leaders is not enough. We must not forget the "foot soldiers" in the Chinese repressive apparatus who were accomplices: Jia Lianchun, the president of Beijing No. 1 Intermediate People's Court, his assessors Zheng Wenwei and Zhai Changxi, and the prosecutors Zhang Rongge and Pan Xueqing, who were all happy to convict Liu Xiaobo in a trial lasting just two hours.

The following officials must also be held responsible for mistreating Liu Xiaobo and denying him medical care: Chen Qiufa, the governor of Liaoning province; Li Xi, the secretary of the Liaoning provincial committee of the Communist Party; Ma Zhenfeng, the former director of Jinzhou prison, in Liaoning province, where Liu Xiaobo, was held; and Wang Zhansuo, his successor.

China signed the International Covenant on Civil and Political Rights in 1998 but took care never to ratify it. Harassment and acts of violence against civil rights activists and citizen-journalists have increased since 2013, when Xi Jinping took over as president.

"The authorities at least pretended to be trying to improve the human rights situation in previous decades," said Cédric Alviani, the head of RSF's East Asia bureau. "But Xi Jinping's administration has brazenly rehabilitated practices worthy of the Maoist era – abduction, holding detainees incommunicado and without trial, systematic torture and mistreatment, and televised forced confessions."

Ranked near the bottom of RSF's World Press Freedom Index (176th out of 180 countries), China is one of the world's biggest prisons for journalists and civil rights activists.