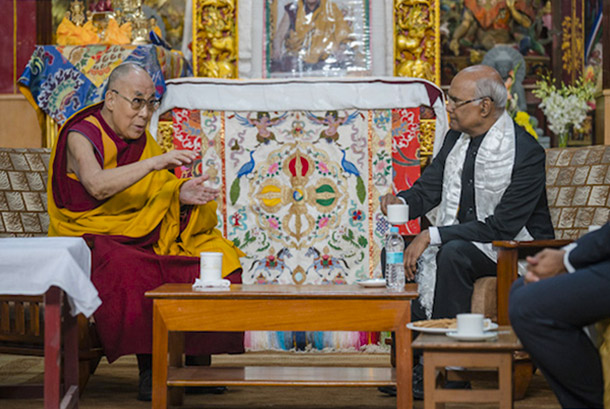 Dharamshala — The spiritual leader of Tibet, His Holiness the Dalai Lama sent his message of congratulation to Ram Nath Kovind on his election as the 14th President of India and expressed his pride and hopes as "a son of India."

In the congratulatory letter, His Holiness said, "This is the 58th year of our life in exile. Thanks to the kindness and generosity of the Government and the People of India, more than 130,000 Tibetans continue to make their homes in this country. We will always be grateful."

"I often describe myself as a son of India because my entire way of thinking has been shaped by the Buddhist training I have received. This is rooted in the works of great masters of the historic Nalanda University, such as Acharya Nagarjuna and Arya Asanga. In the meantime, my body too has been nurtured by Indian rice, dal and roti. Therefore, I feel a real bond with this great country and a constant concern for its welfare."

He went on to explain how his life is guided by three principal commitments— working to bring about a more compassionate world; encouraging inter-religious harmony; and working to preserve Tibet's Buddhist culture, based as it is on the Nalanda Tradition. To these he has recently a fourth commitment—to revive ancient Indian knowledge, particularly of the workings of the mind, which is immensely helpful when it comes to transforming our destructive emotions and promoting basic inner values. He asserted his belief that India is the only country with the potential to combine such ancient knowledge with modern education in the interest of developing inner peace.

"As India develops and grows there is much to be proud of. It pleases me to see that the international community is becoming ever more aware of India's importance, not only because it is the world's largest democratic nation, but also because of its exemplary traditions of religious harmony, karuna and ahimsa. As our world becomes increasingly interdependent, I look forward to seeing India take a more active role on every continent, sharing these treasures for the greater good.

"I understand that in your public career thus far, you have done much to champion the cause of the poor and the downtrodden. Although India has achieved tremendous development, challenges remain in the fields of nutrition, education and protection of children, reducing the widening gap between rich and poor, and curbing corruption. I have raised these concerns with leaders before, because I feel they are serious issues that need to be tackled openly and boldly, keeping in mind the people's long-term interest. It is vital that India succeed.

"No doubt you will do whatever you can to consolidate India's strengths so that she may provide the leadership in the world that her stature entails," His Holiness concluded.

The presidential poll on Monday saw nearly 99 per cent voting, the highest ever, according to the returning officer. Polling was held simultaneously at 32 polling stations -- one in Parliament House and one each in 29 state assemblies and two union territories with assemblies.