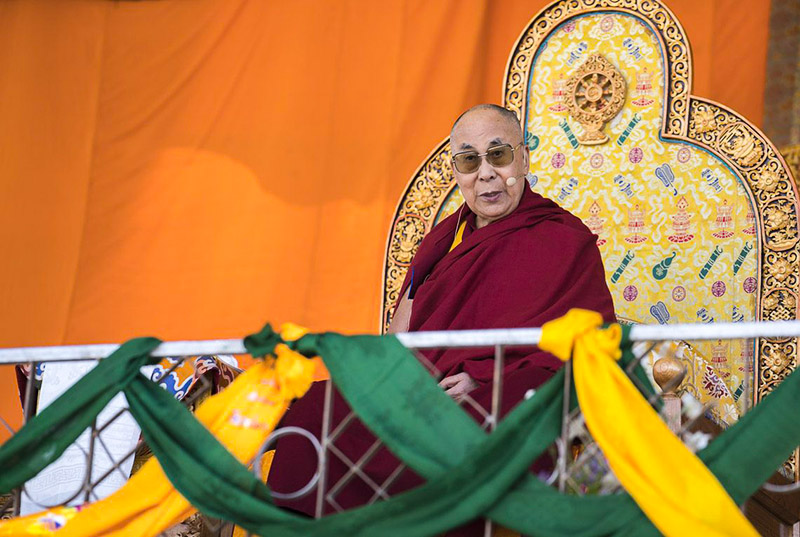 Leh, Ladakh, J&K, India — While urging the people of Tibet not to lose their pride and confidence in being a Tibetan, His Holiness the Dalai Lama said that Tibetan people have truth on their side and that won't change. China will change, there has been change even under the same regime over the last 20 years.

The spiritual leader of Tibet visited the SOS Tibetan Children's Village School in Choglamsar where the director and principal received him on his arrival, while the children provided a traditional welcome that included the 'chema changpu' offering and the Tashi Shölpa dance. As he walked to the covered stage above the school ground, His Holiness greeted and reached out to the crowd, including many elderly and infirm people waiting in hope of seeing him.

There followed a cultural performance by adults from the Sonamling settlement who danced and sang. The theme of the song was that they had not expected to encounter the Omniscient One, and here he was seated on the throne—may there be prosperity and happiness.

After presenting tokens of gratitude to local dignitaries such as the Chief Executive of the Council, the Addl. Deputy District Commissioner and the President of the Ladakh Buddhist Association, His Holiness the Dalai Lama addressed the gathering and lauded the spirit of the Tibetan people.

"Tibetans in Ladakh have been in exile for about 50 years and although one generation is giving way to another, the Tibetan spirit continues to remain strong. I'm happy to see all of you and our guests here today," the spiritual leader told them.

"We Tibetans who live freely in exile need to speak up for the 6-7 million Tibetans at home in Tibet, who are unable to speak for themselves. I don't have any criticism to make of the Chinese people in general. Since the time of Songtsen Gampo in the 7th century we've maintained relations with the Chinese.

While differentiating between the communist totalitarian regime and the general public, His Holiness said: "They [Chinese people] have been following the Nalanda Tradition of Buddhism longer than we have. I have no resentment towards the Chinese people for what's happened to us, but among hard-line Chinese officials are many who are rigid and narrow minded."

"Historically the Chinese, Mongolian and Tibetan empires stood apart. Now, however, hard-liners have overpowered Tibetans as part of what they called peaceful liberation. And what they have referred to since 1951 as the Tibet Autonomous Region is only part of the territory that used to look to the Ganden Phodrang government.

The Nobel Peace Prize Laureate said that China can control the physical body by military force but they cannot control the mind and will of people. "Employing all kinds of measures to subjugate Tibetans, the Chinese authorities have tried to eliminate the Tibetan identity. However, while physical controls can limit and confine people's physical movements, they can't control their minds."

"When they make people suffer, how can they expect a positive response? Hundreds of thousands of Tibetans have died in the course of this struggle. In the face of such suffering it's our responsibility to speak up for their rights and freedoms, clear in the knowledge that we will only achieve change through education and awareness," he said, adding: "but not by resorting to force."

"One of the factors ensuring the continuing strength of the Tibetan spirit is the common language that underlies our culture and religion. Our Kangyur and Tengyur collections contain the most complete presentation of the teachings of the Buddha—and they exist in our Tibetan language. We don't need to turn to Sanskrit or any other language; we can read them in our own."

His Holiness went on to explain that although the Chinese follow aspects of the Nalanda Tradition, they did not adopt the use of reason and logic. There may be 1 billion Buddhists in the world, he said, but those who employ the rigorous logic of Dignaga and Dharmakirti are few. He observed that the knowledge preserved in the Tibetan tradition that deals with tackling negative emotions continues to be relevant today.

Turning to the elderly in the audience, His Holiness advised that as death comes nearer day by day, it is good to take refuge in the Three Jewels, cultivate a warm heart and recite 'Mani' and 'Tara' mantras.

Appreciating the way the young students had debated, His Holiness recalled that Shantarakshita had introduced the study of philosophy, logic and debate to Tibet in the 8th century. It was later further formulated by Chapa Chökyi Sengey (1109-69), the Abbot of Sangphu.

Talking of the modern day education, the Buddhist monk remarked that as an investigative technique debate can be applied to other topics too, which is why he is encouraging modern students to take it up. The Tibetan use of logic and debate is something even scientists admire.