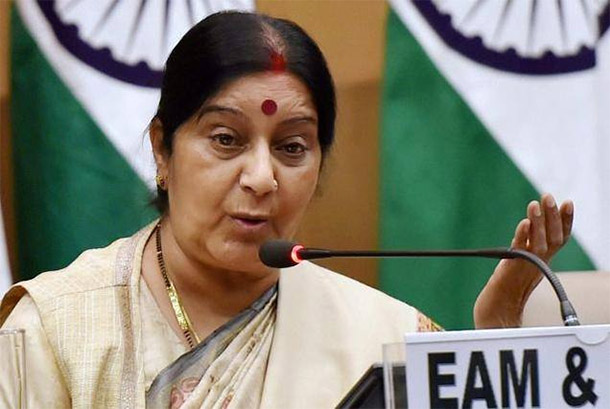 New Delhi — There is no quid pro quo with China on the issue of "sufferings" of the Tibetan people and stapled visas being given to Arunachal Pradesh residents by China, Ministry of External Affairs, Government of India said, according Indian media reports.

Asked about India's stand on Tibet, she said "we used to earlier talk of One China policy, but we used to say that Arunachal Pradesh is an integral part of India. And when we say that, we want that China should also recognise this. Our policy has been made very clear."

On the issue of whether India remained a mute spectator towards the alleged atrocities in Tibet, the Minister said "We are not sitting as a mute spectator. Whenever there are differences, we raise them."

She said the Dalai Lama wanted to visit Tawang and "we allowed him to do so". This is not the first time but the fifth or sixth time that he is visiting that place. "Whatever issue that is there that goes against India's interest, we lodge our protest," Ms Swaraj said.

To a question, she said there was no policy under which Chinese companies are denied security permission. She also objected to a member raising the issue of a particular Chinese company in the House.

She said that denial of security permission to one particular company cannot determine the relations between the two countries. She said it done under a process and if a Japanese or a Korean company applied, they get it first.

To another question on the cancellation of a visit of Indian journalists to Tibet by China, Minister of State for External Affairs MJ Akbar said there is no official information from China about it. He said Indian journalists are independent and take their decisions independently and it was between them and the Chinese authorities about the visit to Tibet.

"As far as the visit being cancelled, officially we don't have any information. It is between the journalists and the host country," he said.

Mr Akbar said in 2014, when Prime Minister Narendra Modi met President Xi Jinping in Astana, a close development partnership issue was raised and both countries decided to increase people-to-people and media contacts and decided to do everything to bring the two countries together.