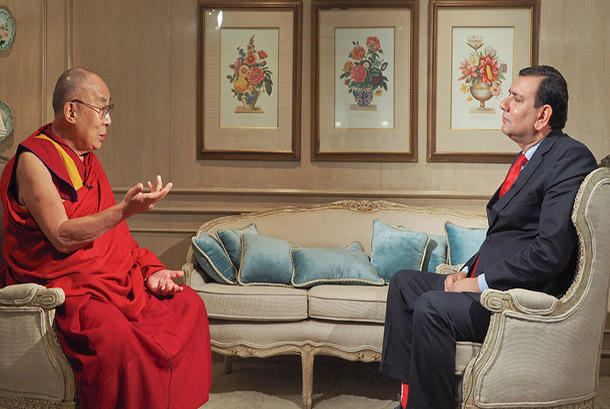 New Delhi — Explaining there have been Chinese troops on the India-Tibet border since the so-called liberation of Tibet where there were none before, His Holiness the Dalai Lama said: 'China says they want stability and unity, yet the methods they employ give rise to fear. When there's fear, there's no trust and where there's no trust how can you expect to create peace, harmony, stability?'

Srinjoy Chowdhury, National Affairs Editor for Times Now interviewed His Holiness the Dalai Lama Sunday, August 6, 2017. His Holiness told the news channel that "some of the Chinese hardliners, who are short-sighted have chosen to use methods of fear to instill stability when asked about the reason behind China's recent aggression against India and Tibet. "Some of the hardliners in China are short-sighted and have chosen methods of fear to instill the stability but the trust and fear can't go together and without trust, there can't be peace of stability," His Holiness told the Times Now.

Chowdhury lost no time in putting his first question about the relevance of ancient wisdom in today's troubled world. "The ancient wisdom I'm talking about," His Holiness told him, "is mainly concerned with the emotions and their role in the mind. Then there is also the matter of logic, which allows us to analyse reality. These are relevant in today's world because so many of our problems are due to our not having a long-term, holistic view.

"In this context violence is unhelpful. In fact I might say that violence goes against our basic human nature, which is to be compassionate."

Chowdhury asked about Chinese aggressiveness towards His Holiness and towards India and His Holiness attributed this to hard-liners in Beijing. "They say they want stability and unity, yet the methods they employ give rise to fear. When there's fear, there's no trust and where there's no trust how can you expect to create harmony or stability?"

With regard to His Holiness's visit to Arunachal Pradesh earlier this year, he acknowledged two key factors—the great affection people there show him and the emotional link he feels for the place where he first entered India after escaping from Lhasa in 1959.

Pressed about China's and India's stand-off in Doklam, His Holiness remarked that China and India are both great and ancient nations. They have to live side by side. He noted that there have been Chinese troops on the Indian border since the so-called liberation of Tibet where there were none before. He stated that the only realistic approach is one that achieves mutual benefit. He suggested that easing arrangements for Chinese Buddhists to come to India on pilgrimage could be an appropriate confidence building measure.

Turning to domestic issues His Holiness expressed appreciation of Prime Minister Modi's being as active as he is. He voiced approval of his having raised India's profile in the international arena, since India is the world's most populous democratic nation. When Chowdhury observed that His Holiness has known all the Prime Ministers of independent India, he recalled knowing Nehru well and having sought his advice on several occasions.

Challenged about his successor as Dalai Lama, His Holiness laughed and pointed out that this seemed to be something about which the Chinese government is more concerned than he is. He did, however, concede that he is considering reconvening meetings of Tibet's spiritual leaders to discuss how to proceed.

When Chowdhury mentioned the oppression that continues to prevail in Tibet, particularly with regard to religion, His Holiness stated unequivocally,

"We are not seeking independence; we've made this clear since 1974. It can be to our benefit to remain with the People's Republic of China, we need modernization. However, at the same time we have our own unique language and heritage—the Nalanda Tradition—that we have kept alive for more than 1000 years and which need to continue to preserve. Many Chinese now recognise that ours is a comprehensive, authentic Buddhist tradition."

His Holiness added that since the Tibetan Plateau has a role in global climate change equivalent to the North and South Poles, it is also important that Tibetans be able to protect it.

Finally Chowdhury invited His Holiness to comment on prospects for the world in the next 10-20 years. "Modern education is too one sided at present, it's too materialistic." His Holiness replied. "We need to be able to teach people how to cultivate peace of mind. India is the country that has the potential to successfully combine such modern education with understanding drawn from ancient knowledge of the workings of the mind and emotions. It's a question of raising awareness."

"So, you're saying that ancient Indian values can help make the world a better, more peaceful place in the future?" Chowdhury enquired. "Yes," His Holiness replied, "one of my commitments now is the revival of ancient Indian wisdom in this country."