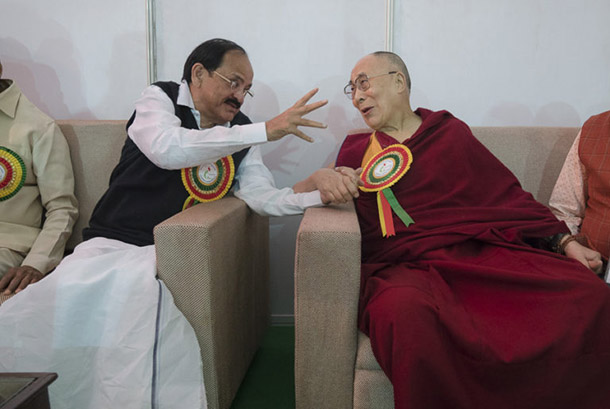 New Delhi — His Holiness the Dalai Lama on Saturday congratulated Venkaiah Naidu on his election as the 13th Vice-President of India and expressed confidence that Naidu's years of experience in public life will serve him well as he takes up the important constitutional role of Vice President.

Mr Naidu was elected the 13th Vice-President of India after securing over two-thirds of votes, leaving Opposition candidate Gopalkrishna Gandhi far behind.

In his letter His Holiness declared, "I have a deep affection for this country with its rich civilization and longstanding traditions of tolerance, karuna and ahimsa. Despite her huge population and the multiplicity of languages, religions and culture that flourish here, India remains remarkably stable—a model to the world of how religious traditions can live side by side in mutual respect."

"Wherever I go I take pride in citing India as a living example of unity in diversity. This is because of the value placed here on democracy, the rule of law, freedom of expression and freedom of the media. India must succeed because so many other nations look to her for leadership and inspiration," the Tibetan spiritual leader said.

The Nobel Peace Prize laureate further said: "This year marks the 58th year of our life in exile. Thanks to the generosity and hospitality of the Government and people of India, more than 130,000 Tibetans have made India their home. It is natural that we too take pride in the progress India has made in sustaining prosperity and development while holding fast to its democratic principles."

His Holiness recalled being pleased to have met the Vice President elect briefly in February this year at the National Women's Parliament 2017 in Vijayawada. The leader of Tibet expressed confidence that Shri Venkaiah Naidu's years of experience in public life will serve him well as he takes up the important constitutional role of Vice President. He concluded by wishing him every success in tackling whatever challenges lie ahead.

Naidu, 68, a Minister in the NDA government and earlier in the one led by Atal Bihari Vajpayee, defeated the combined opposition candidate Gopalkrishna Gandhi by 272 votes. The 68-year-old BJP leader from Andhra Pradesh got 516 votes out of the total 771 votes cast, while Gandhi could bag only 244 votes. Of the total 771 votes polled, 11 were found to be invalid.