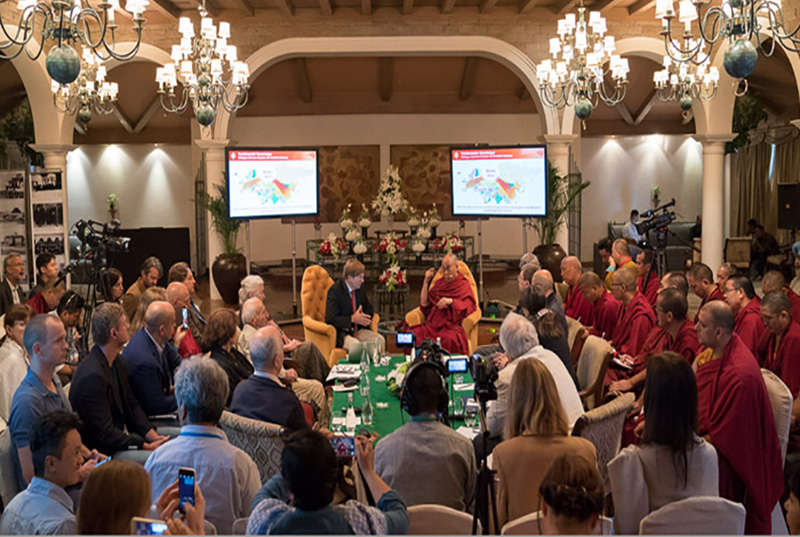 New Delhi — The spiritual leader of Tibet, His Holiness the Dalai Lama, joined a discussion on the Nature of Consciousness between Russian and Buddhist scholars held on August 8-9.

Addressing the crowd gathered in the hall in New Delhi, His Holiness began, “I’ve had useful discussions with scientists for more than 30 years with two purposes in mind. The first is to extend our knowledge. Until the late 20th century scientists mostly investigated external phenomena, including the brain. These were things they could measure and which a third person could agree about. However, in the late 20th century and early 21st century more and more scientists have begun to find evidence that such experiences as meditation and mind training affect our brains in previously unforeseen ways—this is called neuro-plasticity.

“The second purpose relates to the sad reality that although we are sitting together peaceably here, enjoying each others’ company, elsewhere people are being killed, the gap between rich and poor continues to grow and children in places like Yemen are dying of starvation. Organized violence—war—including the civil wars in Russia and China, took up a lot of the 20th century. Historians claim that 200 million died violently as a consequence. If a happier and more peaceful world had been created as a result, someone might say it was worthwhile, but that is not the case. In search of a solution to a disagreement, people resort to the use of force. The consequent violence just fosters further violence.

“We have to learn from experience and enter into dialogue, remembering that others are our human brothers and sisters. We have to live together. The global economy and the effects of climate change are not limited by national borders. It’s the idea of ‘us’ and ‘them’ we have to restrain, because it so easily becomes the basis for violence. We have to educate people to understand that we are all part of humanity.

“Fear and suspicion won’t help us live together. We have to cultivate warm-heartedness. So the other purpose is to draw attention to the importance of peace of mind and the fact that we can’t build peace on the basis of anger.”

Presenters addressed topics including Neuroscience, Consciousness and Emotion, Language, and while discussions between scientists and Buddhist scholars continued late in to the afternoon, His Holiness retired for the day, saying he looked forward to listening to their conversation again tomorrow.

Beginning the second day of the panel, the moderator introduced the day’s first speaker, David Dubrovsky, who praised His Holiness’s humanistic thought based on universal ethics and a sense of our fundamentally good human nature, saying, “Despite the widespread awareness of the problems we face, no decisive action has been taken that can change the situation. We are in need of a change of human consciousness. Instead consumer greed and aggressiveness threaten our self-destruction. While extreme self-centredness and aggression threaten the future of humanity, it seems Buddhism allows us to develop compassion and warm-heartedness.”

His Holiness expressed his appreciation of the views expressed, but suggested that we could not hope for change only on the basis of the brain. Instead it’s the mind that can be trained and enlightened. He also told the story of a Lama, Thupten Rinpoche, who died in New Zealand. He had remained seated in meditation, in what Buddhists call ‘clear light’ for four days after being declared clinically dead. At that point, overnight, the position of his hands changed with his left taking hold of the ring finger of his right hand.

The morning’s second presentation was given by Maria Falikman of Lomonosov Moscow State University, who spoke on ‘Cultural-Historical Activity Perspective on Human Attention: Possible Insights from Meditation Studies’. She said, “Human attention is clear. You can see when someone is attentive, it’s obvious in its effects.” She cited William James, the first educator to offer a psychology course in the United States, and his cause and effect theories about attention. She mentioned that Buddhist ideas of mental factors make a useful contribution to understanding attention.

His Holiness asked whether anything has been observed about the brain functions of social animals. He noted that birds and dogs, which are social creatures, will show appreciation if you feed them. However, it has been his experience that when he allows a mosquito, not an obviously social animal, to suck his blood, it shows no appreciation when it’s had its fill.

His Holiness also said, "people have speculated about self for more than 3000 years. Ancient India accepted the idea of life after life and that it is clearly not the body that goes on to the next life. A soul, or self, known as ‘atman’ held to be a permanent, single and independent entity was proposed. The Buddha, however, said no to this. He said that grasping at such a self, misconceiving such a self, is like having an evil thought.

"It’s being a dependent origination defends against the extreme of eternalism, while it’s being a dependent designation defends against the extreme of nihilism. As the quantum physics’ observation that nothing exists objectively, that it depends on the presence of the observer, reflects a similar insight. Buddhism uses such understanding, as cited in Nagarjuna’s verse, as an antidote to fundamental ignorance."

In his concluding remarks, His Holiness said, “We all wish to be free from suffering, that’s something that requires no further proof. Key to this is coming to understand the workings of the mind as revealed in those ancient Indian traditions that include shamatha - concentration - and vipashyana - special insight. The Buddha appears to have propounded different explanations at different times. This was not because he was confused, nor because he was trying to confuse others, but because he was teaching what was most appropriate to people of different capacities and dispositions.

“As a Buddhist monk, I’ve learned a great deal from scientific findings and scientists have learned about the mind, and how to tackle destructive emotions, from us. When our conversations began nearly 40 years ago, there was some resistance in our monasteries—not any more. In future I hope it may be possible to invite Russian scientists to take part in our meetings with scientists from the West.”