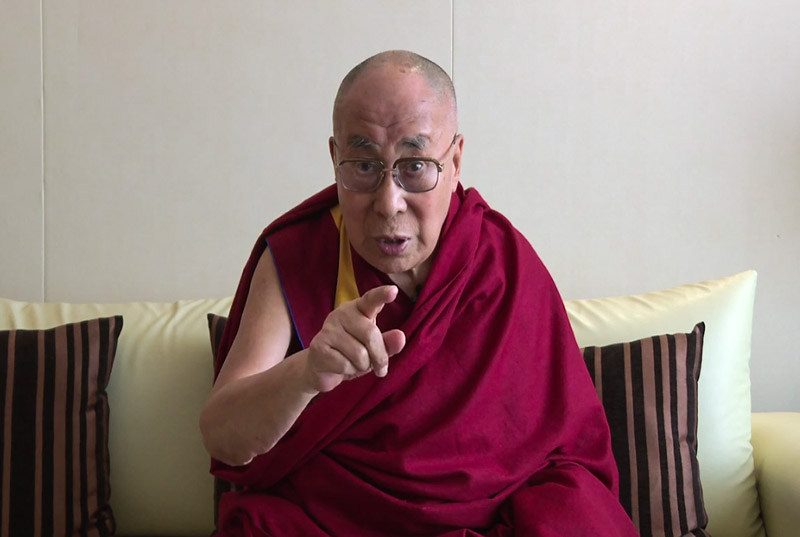 Dharamshala — Dharamshala — Expressing his heartfelt regrets for not being able to attend the Mind & Life Conference in Botswana, His Holiness the Dalai Lama said: "With inner peace," we can solve the problems in the world today through dialogue with "a mutually acceptable solution. That is the only human way."

The Tibetan spiritual leader Thursday sent a video message to the President of Botswana Ian Khama and the organisers of the Mind and Life Conference in Botswana for not being able to attend the conference as scheduled.

"I want to express my heartfelt regrets for not being able to attend the conference. Since I received the invitation about a year ago, I was very excited. However, due to the busy schedules of the last two months, I am feeling extremely tired physically," His Holiness said in the video message on August 17, 2017.

"Usually, the high altitude of Ladakh doesn't affect me much, but this time, I think because of my age, I felt very tired. So, even though my spirits is high, my body doesn't seem to agree. Therefore, I have no alternative but to cancel the visit," His Holiness explained.

The Nobel Peace Laureate further called the cancellation as a mere postponement and expressed hope for another opportunity to come soon.

Speaking to President Ian Khama, His Holiness expressed his gratitude to the President for his sincere efforts and genuine interest in His Holiness the Dalai Lama's visit to the country.

"I am deeply touched by your sincere efforts and appreciate your interest in the conference," His Holiness said in his message for the Mind & Life Conference on "Gotho/Ubuntu: A Dialogue on Spirituality, Science and Humanity" being held in Gabarone, Botswana from August 17, 2017.

Regarding the conference, His Holiness the Dalai Lama expressed confidence in the potential of Africa as a continent and heaped praises on the concept of 'Ubuntu' -one of the central themes of the Mind and Life conference.

"I always try to promote the concept of Oneness of humanity. Similarly, your tradition of Ubuntu also focuses on the oneness of humanity which a ifreat thing. Ubuntu may be an ancient concept but it is very relevant in today's world," His Holiness remarked.

"Today a lot of the problems which humanity is facing is due to secondary level of differences such as different nationalites, religious faiths and races. Logically speaking, the only remedy to reduce this is to develop a sense of oneness among the seven billion human beings," His Holiness said.

"I am now 82 years old. I belong to the 20thcentury. In my life, I have observed that humanity seems to become more mature as they go through difficult periods. The desire for harmony, desire for peace is much stronger these days. In the earlier part of the 20th century, I think people really feel violence or war is a part of life and consider it to be the best method to solve problems. But now, that kind of thinking has changed," His Holiness noted.

"Although there are some violence here and there even now it is a vestige of the past way of thinking. Solving problems through violence is an old way of thinking, it is outdated."

"Peace must come through inner peace. With inner peace, whenever we face some disagreement with other's views or rights, we can solve it through a mutually acceptable solution. That is the only human way."

"So your nation can make some significant contribution towards that. Sometimes smaller nations may have greater potential to create peace. That's my view," His Holiness said in the video message.

His Holiness the Dalai Lama has cancelled his visit to Botswana originally scheduled for August 15-20 this year owing to physical exhaustion.