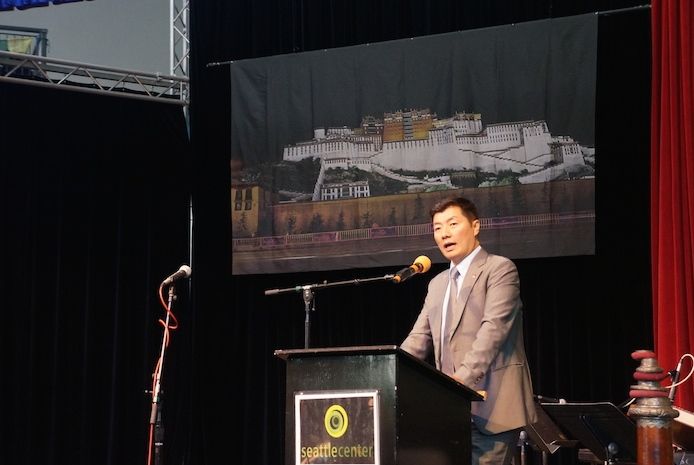 Dharamshala — The democratically-elected President of the Tibetan people, Sikyong Dr Lobsang Sangay, was welcomed by members of the Northwestern Tibetan Cultural Association in Portland, Oregon on August 23rd for a trip to the United States, which included celebrating Tibet Fest in Seattle.

The 22nd Tibet Fest was held at the Seattle Center in Seattle, Washington on August 26. The Tibet fest is an annual event organized by the Tibetan Association of Washington that provides an opportunity to experience and explore the cultural roots and contemporary influences of Tibet through live performances, visual arts, activities, foods, games, and a marketplace.

Addressing the festival, President Dr Sangay spoke about the current situation inside Tibet particularly the ongoing repressive policies adopted by the Chinese government in Tibet which is endangering the very existence of Tibetan religion, culture and identity.

Emphasising the importance of preserving Tibet’s environment, Dr Sangay stressed on the irreparable damage being done to Tibet’s fragile environment by China’s illogical developmental policies and how it’s endangering not just the Tibetan plateau but the whole of Asia and the world.

Sikyong arrived in Seattle on 25 August and was given a warm welcome by executive members of the Tibetan Association at the Seattle airport. President Dr Lobsang Sangay visited the Sakya Centre after his arrival to meet and address the local Tibetan Community. President Dr Sangay addressed the gathering followed by question and answer session. Around 150 local Tibetans based in Seattle turned up to listen to the President.

He further encouraged parents to send their children to take part in summer programs in Dharamsala, India and explained Tibet Corps, a programme aimed to attract talented Tibetans to serve in the exile community.

The President returned to Portland where he addressed the local Tibetan community during a public talk at the Tibetan Community Center in Portland on the 27th before traveling to San Francisco.