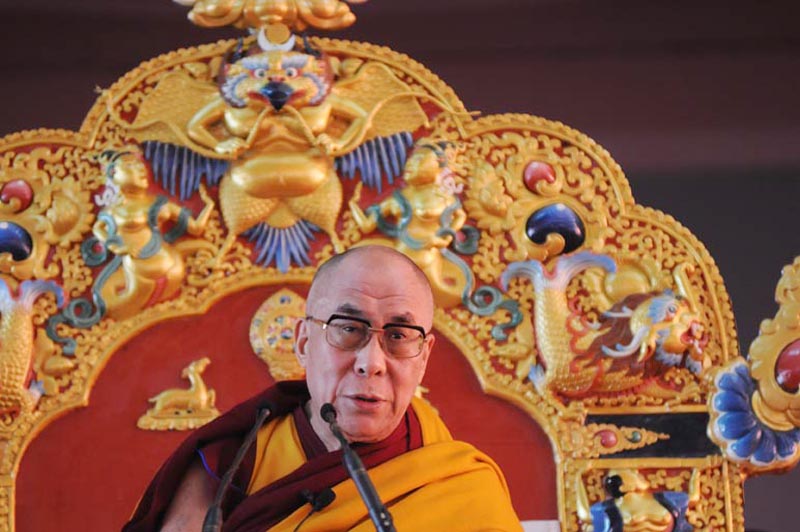 Bodhgaya: Tibetan spiritual leader His Holiness the Dalai Lama yesterday arrived in Bodhgaya, the holy site in Bihar where Buddha achieved enlightenment thousands of years ago. Today His Holiness began a five-day teaching as part of the seven-day Gelug Monlam, the biggest religious festival of the Gelug sect of Tibetan Buddhism.

His Holiness proceeded to the Tibetan Mahayana Institute called Gaden Phelgyeling Namgyal Monastery after stopping at the Mahabodhi temple, where he offered prayers inside the sanctum before moving to the Bodhi tree peepal, a direct descendant of the tree under which Gautama Buddha is said to have become enlightened about 2,500 years ago. His Holiness also inaugurated a multi-media museum, where he admired new stone carvings depicting Buddha's life in the Mahavihara premises.

The exiled Tibetan leader addressed more than 50,000 Buddhist devotees who had congregated in Bodh Gaya on the importance of pure sincerity, or morality, on the part of both preachers and listeners, rather than the desire for fame or self-benefit.   Among the 50,000 who have gathered in Bodh Gaya for the Tibetan monk's annual World Peace Lecture that began today, at least 1,000 ? most of them between 20 and 40 ? are from non-Buddhist countries like Australia, Italy, the Czech Republic, Spain, England, Brazil and several African and Asian countries.

This afternoon, the Noble Peace Prize laureate lectured on the master Nagarjuna's “In Praise of the Transcendentall” (jigten ley depar toepa) and Atisha's “Lamp of the Path to Enlightenment” (jangchup lamdron). Over the next few days, he is scheduled to teach on Longchen Rinpoche's “Mind In Comfort and Ease”(semnyid nyelso) and Tsongkhapa's “Short Version of the Stages of the Path To Enlightenment” (lamrim dhuedhon). At the end of the five-day teaching, the Monlam organizing committee will perform a grand long-life prayer offering for His Holiness.