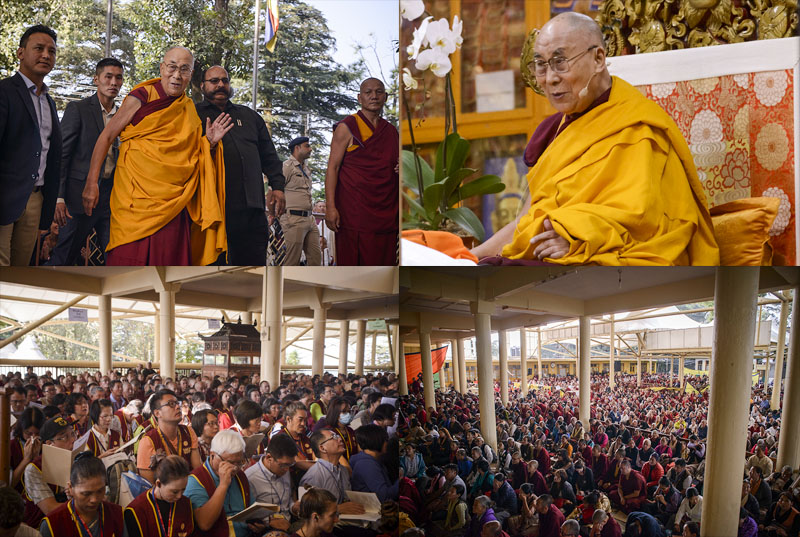 Dharamshala, HP, India - "One result is that we face problems largely of our own making. Because of a lack of compassion wars break out and we witness unthinkable killing. We pursue trade in weapons whose sole purpose is to harm and kill," the spiritual leader of Tibet told a crowd of thousands of devotees on the first day of a four-day teachings of Chandrakirti's 'Entering into the Middle Way', in Dharamshala. He said that "Anger and hatred, seeing our brother and sister human beings in terms of 'us' and 'them', limit our outlook and lead to the bullying, exploitation and killing."

Cicadas trilled and the Dhauladhar Mountains stood stark and clear in the early morning sunshine as His Holiness the Dalai Lama walked to the main temple in McLeod Ganj, the Himalayan hill town is situated in Kangra district of Himachal Pradesh, India. An audience of 6000 awaited his arrival. Standing before the throne, he saluted them and many waved back. After recitations of the Mangala Sutta in Pali by Thai monks, the 'Heart Sutra' was recited in Chinese by the 1300 Buddhists from Taiwan belonging to 22 cultural organizations under the umbrella of the International Association of Tibetan Buddhist Dharma, Taiwan.

His Holiness remarked that these were the main disciples for the series of teachings he was beginning today. He added that there were also people from other countries where Buddhism has traditionally been practiced — India, Nepal, Korea, Japan, Russia and Vietnam---and countries not accustomed to Buddhism---Israel, Spain, Germany, France, the USA and the UK. Altogether there were people from 69 countries. His Holiness announced that he would begin with a short introduction.

"We call ourselves Buddhists, but often we don't really pay attention to what Buddhism is about. If we examine the teaching, develop conviction about it we'll develop an understanding founded on reason.

"All sentient beings have an instinct to seek happiness and avoid suffering. Pain and pleasure come from causes and conditions, but we human beings are the only ones who can understand this. Every day I pray for the welfare of all sentient beings, but the only ones I can really do anything for are my fellow human beings on this planet. Our human intelligence enables us to examine how to reduce human suffering. However, as education has become more focused on materialistic goals, and as people increasingly seek happiness in sensory pleasure, less attention has been paid to our inner world, to peace of mind and to morality.

"One result is that we face problems largely of our own making. Because of a lack of compassion wars break out and we witness unthinkable killing. We pursue trade in weapons whose sole purpose is to harm and kill. Look at what happened in Las Vegas yesterday where nearly 60 people were killed and more than 500 were hurt. In other places poor sanitation and a shortage of food mean children are dying of starvation. Anger and hatred, seeing our brother and sister human beings in terms of 'us' and 'them', limit our outlook and lead to the bullying, exploitation and killing we learn about in the news.

"We are social animals, who live in communities, who depend on each other to survive. Therefore, we need to respond to each other with love and compassion. Scientists have found evidence, revealed by young infants, that basic human nature is compassionate. However, our natural instinctive compassion tends to be biased towards those close to us. Since we're all interdependent, we all benefit if our neighbors are peaceful, whether they are a neighboring family or a neighboring country. Therefore, we need to extend our compassion to the whole of humanity."

Turning to the text he was planning to teach, His Holiness stated that Aryadeva's 400 Verses and Chandrakirti's 'Entering into the Middle Way' are studied by all schools of Tibetan Buddhism. He said he received the explanatory transmission of 'Entering into the Middle Way' from Ling Rinpoche, who had heard it from Choney Lama Rinpoche. Later, His Holiness received the explanatory transmission of Chandrakirti's auto-commentary from the Sakya Abbot, Kunga Wangchuk, who had spent many years imprisoned in occupied Tibet.

His Holiness also announced his intention to give the transmission of Je Tsongkhapa's 'In Praise of Dependent Origination'. He reported having memorized this text in about an hour when he was young and there are verses from it that he continues to recite every day.

"I think of Je Tsongkhapa as a second Nagarjuna, not out of loyalty to Gelukpa tradition, but on the basis of reading and studying what he wrote. Look at the 'The Elucidation of the Thought' and the 'Essence of True Eloquence'. When the Sanskrit Pandit Tripathi was translating these into Hindi, I asked him if thought Tsongkhapa could be compared to the great Nalanda scholars and he replied not only that he could, but that he would be counted among the best.

"Two of my teachers were Kinnauris, Khunu Lama Rinpoche and Geshe Rigzin Tenpa. The latter gave me an explanation of 'In Praise of Dependent Origination'."

Opening 'Entering into the Middle Way' His Holiness read the Sanskrit title, Madhyamakavatara, which indicates its authenticity. Next there was the translator's salutation to Manjushri, which indicates that the text belongs to the category of Higher Knowledge or Abhidharma.

His Holiness pointed out that the scriptural collection of words of the Buddha in Tibetan, the Kangyur, consists of about 100 volumes, while there are 225 volumes of exegetical treatises in the Tengyur. About a dozen were translated from Chinese, but the remainder had sources in Pali or Sanskrit. These include key works by Maitreya dealing with extensive conduct and others elucidating the profound view by Nagarjuna.

Among Nagarjuna's writings, 'Fundamental Wisdom of the Middle Way' focuses on emptiness, while the 'Precious Garland' reveals aspects of the path. 'Entering the Middle Way' combines both approaches. It also includes criticism of philosophical views other than those of the Middle Way School. Aryadeva's '400 Verses' is a commentary to 'Fundamental Wisdom', as is Buddhapalita's eponymous text. In his 'Lamp of Wisdom', Bhavaviveka criticizes Buddhapalita. Chandrakirti answers these qualms, following the principle of criticizing other points of view, establishing your own view, and then rebutting any contrary responses. His Holiness declared how valuable and stimulating it is to read and compare these various authors' interpretations of the view.

His Holiness mentioned that he is finding that as he grows older, he tires more easily. At 11.30am he stopped for lunch, promising to resume his explanation tomorrow morning. He encouraged his audience to attend review classes being held in the afternoon.

Walking from the temple, he stopped frequently to shake hands and exchange words with old friends and well-wishers in the crowd. He smiled and waved once more as he climbed into the car waiting for him at the bottom of the steps, before driving home for lunch. Members of the International Association of Tibetan Buddhist Dharma, Taiwan were offered lunch in a cordoned off section of the temple courtyard, while members of the wider public were provided food from the general kitchen.