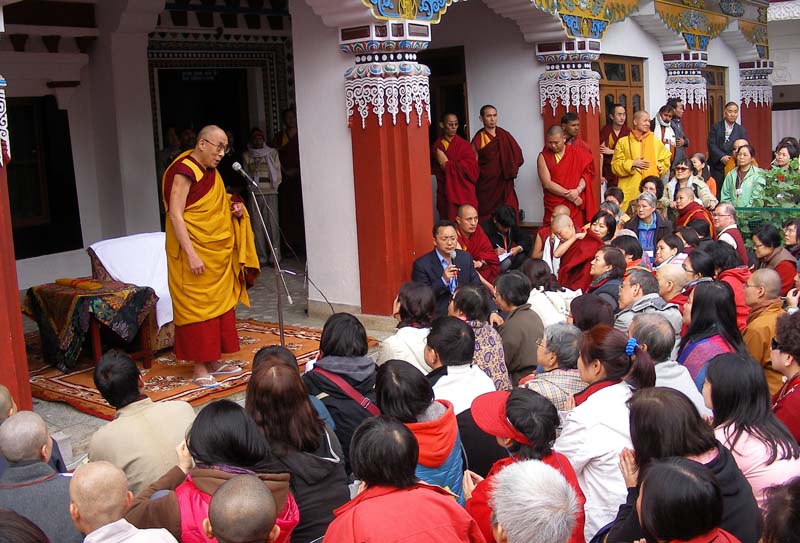 Dharamshala: His Holiness the Dalai Lama yesterday spoke to a gathering of over 600 Chinese and Taiwanese Buddhist devotees on the significance of studying Buddhism, which the Tibetan spiritual leader said actually came to China before flourishing in Tibet.

"I humbly pay my gratitude to you and China, which accepted Buddhism as its religion and ethos three centuries earlier than Tibet," His Holiness remarked.

"The mother of Mao Zedong (the founding chairman of communist China) was a Buddhist. And Buddhism has been the primary religion of China. It was from China [that] Buddhism came to Tibet," he reminded the 600-member Chinese group who had come to hear him speak on the second day of his five-day Buddhist teaching as part of his "World Peace Lecture".

"Mainland China has been facing many such problems, and the poor people are the ones who suffer when there is no morality and justice," His Holiness said. He added, "Even those people who have wealth and power feel no inner happiness, but somehow go unaffected."

"It is a great problem for the entire humanity if there is no compassion and justice," His Holiness declared. "So, it is not mandatory to follow religion [in order] to solve the problems," which he said can also be overcome by promoting good human values. "We can put our efforts in this endeavor, and I am confidant to achieve this aim," he continued.

His Holiness went on to mention that, "historically, Chinese brothers and sisters in the People's Republic of China are Buddhists; the clear example of which is demonstrated by a large number of Buddhist temples, despite having diverse religious faiths in the country." 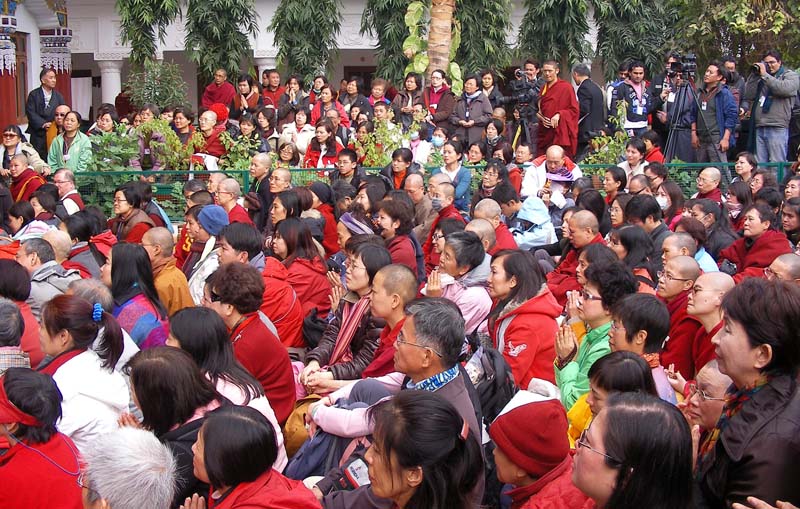 This lecture did not violate a condition India had set for his Tibetan government-in-exile after he escaped from Tibet nearly 50 years ago - that he wouldn't make any political statement against Beijing.

The words drew applause from the Chinese and Taiwanese Buddhist devotees, and many had tears in their eyes. His Holiness then spoke of the "scientific" appeal of Buddhism.

"Einstein and several other contemporary scientists have found the Buddhist way of living as more scientific, for it is an exercise to cure and pure the mind rather than indulging in prayer and recitation," he said.

"The Chinese people should treasure Buddhism as their cultural and religious asset rather than discarding the peaceful way of living..." advised the Nobel Peace laureate, who spared about 20 minutes to address his Chinese followers exclusively.

"You should never forget your original culture and ethos, which offer a panacea from the stress and strain caused by materialistic craving and chaos."

"There are also many Buddhist shrines in Malaysia, Hong Kong and Singapore where there are many Chinese people, which clearly shows the important relationship between Chinese people and Buddhism," His Holiness added.

His Holiness reminded the Chinese devotees about the commitment he and his Chinese friend had made to complete a pilgrimage to Wu Tai Shan (Tibetan: Riwo Tsenga) in China. "I hope to meet some of you in that sacred place in future," he said.

Among those who met His Holiness yesterday was Hollywood superstar Richard Gere, a star of “Pretty Woman”, a practicing Buddhist and an ardent supporter of Tibet. Gere attended the five-day event in Bodh Gaya, one of India's most ancient Buddhist sites.

Some 50,000 people, including nearly 1,000 Westerners, have gathered for the five-day congregation at Bodh Gaya. But the site of the Buddha's enlightenment is surrounded by Barachatti, Guraru, Belaganj and Dobhi - all places marked as "red zones" in Bihar police records.