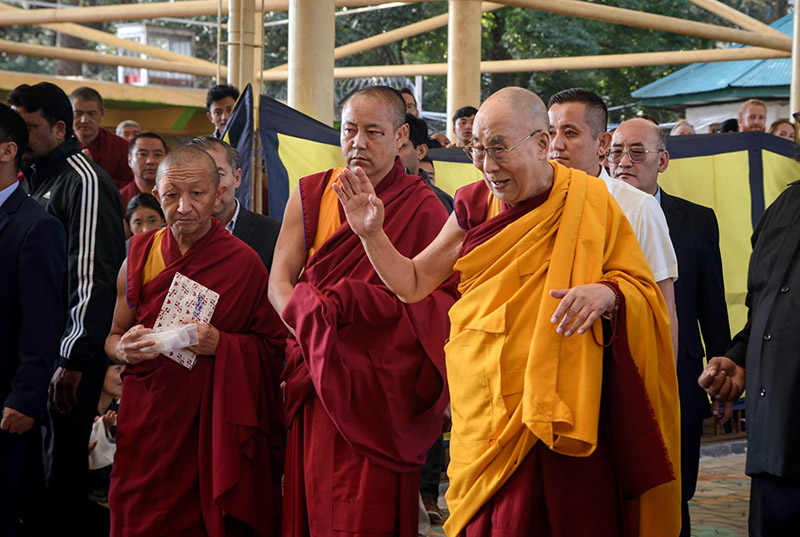 Dharamshala, India — "The text we're studying belongs to the bodhisattva vehicle, so to listen to it for solely selfish reasons is not a good motivation. Similarly, if the teacher is motivated by a wish for material gain or fame, the session will be more like a business transaction," the spiritual leader of Tibet told a crowd of over 10 thousands of people, include over 900 Taiwanese and Chinese devotees, at the second day of a four-day teachings of Chandrakirti's 'Entering into the Middle Way', in Dharamshala.

Before continuing his teachings on Wednesday, October 4, 2017, His Holiness the Dalai Lama met with members of the Tibetan Nuns Project that is celebrating its 30th anniversary. The group included staff, board members, donors and nearly all the 20 nuns who became Geshe-mas last winter.

He told them that the Buddha's teachings flourished in India at such great seats of learning as Takshashila, Nalanda and Vikramashila. It was not a tradition merely based on faith, but was rooted in the use of reason and logic and included instructions for transforming the mind.

"Here in the 21st century, I have found, after 30 years or more discussions with modern scientists, that the traditions of Nalanda University we upheld in Tibet, stir their interest. They are attracted by the use of logic and the Nalanda masters' deep understanding of the workings of the mind.

"With the support of the Dharma King Trisong Detsen and the Adept, Padmasambhava, Shantarakshita established Buddhism in Tibet. Right from the start he encouraged deep and reasoned study. This was the pattern the monks followed. However, since the Buddha ordained his stepmother, Mahaprajapati Gotami and conceded that nuns' aptitude for study and practice was equal to that of monks, I felt it was appropriate to give nuns the opportunity also to study on an equal footing.

"I remember visiting the Bhandara settlement several years ago and because I was impressed by the schoolchildren's debate performance I asked who had taught them. I was pleased to learn it was this nun here, who told me she trained at Dolma Ling Nunnery."

His Holiness mentioned that just as different levels of Geshe degree are awarded to monks, he has suggested that as well as aspiring for a full Geshe-ma degree, nuns might aim for one that reflected study focused particularly on the philosophy of the Middle Way or the Perfection of Wisdom teachings. He expressed a wish to encourage nuns to study the thirteen classic texts. He also made it clear that study and debating about what you have learned are not traditions confined to Gelukpas, but can be found among all schools of Tibetan Buddhism.

His Holiness repeated what he has often stated elsewhere that the way to ensure the survival of the Buddha's teachings is to engage in their study and practice. Laughing, he observed that he is the first Dalai Lama to have encouraged such improvements in the education of nuns. "What you have all achieved," he added, "is something for the Tibetan people as a whole to be proud of."

The teaching session in the temple began as it did yesterday with recitations in Pali of the Mangala Sutta and of the 'Heart Sutra' in Chinese. Seated to the right of His Holiness's throne on this occasion is Gosok Rinpoche, Ngawang Sungrab, who has recently been elevated to the hierarchical position of Jangtse Choejey. This follows the recent incumbent's promotion to the exalted status of Ganden Tripa. Gosok Rinpoche has previously served as Abbot of Sera-mey Monastery and of Gyudmed Tantric College.

"Today, we have gathered for a Dharma discourse," His Holiness began, "but, like any action, whether this becomes something positive or negative depends on our motivation. The text we're studying belongs to the bodhisattva vehicle, so to listen to it for solely selfish reasons is not a good motivation. Similarly, if the teacher is motivated by a wish for material gain or fame, the session will be more like a business transaction.

"You Chinese include an additional verse after reciting the Heart Sutra:
May we dispel the three poisons (anger, attachment and ignorance),
May the light of wisdom shine forth.
May we overcome all obstacles
And enter into the practices of a bodhisattva.

"Negative emotions are founded on ignorance, misconceptions, which can be dispelled by developing wisdom—an insight into the final nature of things. Je Tsongkhapa said that if we wish to tame others' minds, we need to tame our own minds first. We need an understanding of the entire teachings of the Buddha.

"In my own practice I have tried to cultivate method and wisdom. Since I'm a human being like all of you, perhaps what I've found beneficial may be helpful to you too.

"The Buddhas do not wash unwholesome deeds away with water, nor do they remove the sufferings of beings with their hands. Neither do they transplant their own realization into others; they liberate beings by teaching the truth of suchness. This is why the Buddha advised that each and every being needs to work for themselves. When he engaged in six years of austerities, he was setting an example."

His Holiness resumed his reading of the first chapter of 'Entering into the Middle Way', which opens with a tribute to compassion and explores the qualities of the first bodhisattva ground. He completed the chapter in time for lunch. His Holiness is speaking in Tibetan with a simultaneous English translation available. Webcasts also available in Tibetan, Chinese, Vietnamese, Korean, Hindi, Japanese and Russian.