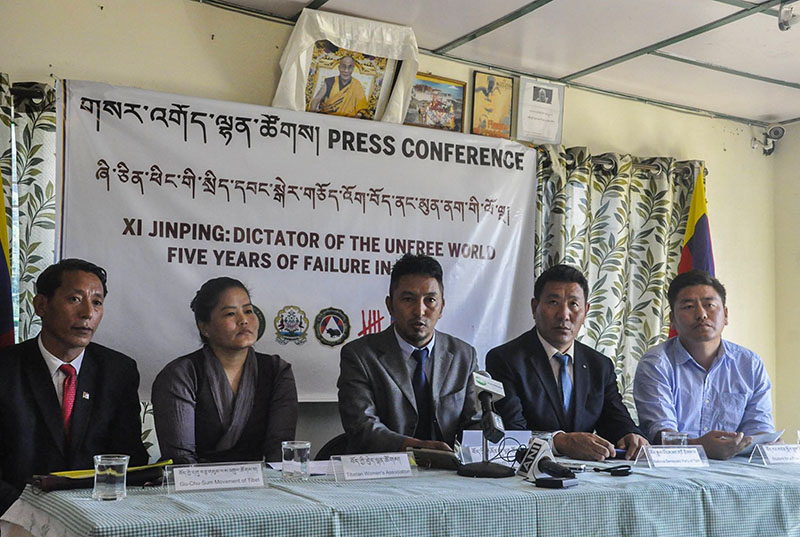 Dharamshala — "Based on the past years of Chinese President Xi Jinping's failed policies in Tibet and increasing crackdown on Tibetans, we have no positive expectation and hope from Xi's dictatorship," the five leading NGOs in exile said during a joint press conference in Dharamshala to mark their strong protest against China's oppressive rule in Tibet.

The Communist Party of China is currently preparing for their 19th CPC national congress, scheduled to begin on October 18, 2017. Top leaders of the Communist Party of China (CPC) are set to meet in Beijing beginning Wednesday for the critical once-in-five years party congress that is expected to further strengthen President Xi's power to pursue more aggressive policy abroad.

The representative of the five major Tibetan Tibetan Non-Governmental Organizations, include "Tibetan Youth Congress", "Tibetan Women's Association", "National Democratic Party of Tibet", "Gu Chu Sun Movement of Tibet" and "Students for a Free Tibet," while speaking to members of the media in Dharamshala said that "the situation in Tibet has gone from bad to worse" with increased violation of basic human rights despite widespread global criticism and condemnation.

"When Xi was appointed as the President of Communist Party of China, many around the world hoped tor positive change and the relaxation of the harsh policies in Tibet. However, Xi has failed to live up those expectations and hopes," said the NGOs representative at the joint press conference.

"Tibetan members of the Communist Party of China and students were ordered not to participate in such ceremonies. These harsh policies are similar to those implemented during the cultural revolution. In an attempt to wipe out the usage of the Tibetan, identity, and culture, the teaching medium in schools has changed from Tibetan to Mandarin. It has created an environment in which people only speak in Chinese at schools, hospitals, and offices, without importance to Tibetan language. Even Tibetans in villages are also forced to speak and learn Mandarin."

"Xi Jinping's crackdown on corruption in the government and party in his first 5-year-tenure has been seen as an internal power struggle. Xi used this crackdown as a tool consolidate his authority and to eliminate his opponents. In regards to Tibet, instead of dealing with problems relating to corruption, the CPC pushed an anti-Dalai Lama campaign and escalated it's crackdown," the representatives said in a press release Tuesday.

"Recently, in the name of the joint efforts to challenge corruption and separatist activity, the Communist Party's key leaders in so called Tibetan Autonomous Region (TAR) criticized His Holiness the Dalai Lama and made a strong directive to punish his supporters within the CPC membership. Under such circumstance, many Tibetan writers and scholars who have been working to promote the Tibetan language, culture, and religion are being targeted and arrested under false charges," they said.

The press release further stated: "Today, around the world, internet freedom is considered as basic need to express individual rights. However, censorship in Tibet becomes worse everyday. From April 2014, the Chinese government established new cyber laws in TAR, which were implemented in different parts of Tibet such as Lhasa City, Shigatse, Lhokha, Chamdo, and Ngari region. On July 1 of the year, TAR established a new cyber management committee, and from September onwards, they have increased internet restrictions all over Tibet."

"In addition to the repression of people in Tibet and other occupied countries and in mainland China, the Chinese Communist regime has adopted an expansionist policy to assert it's control and power globally. China is claiming many Islands in the South China Sea and have begun stationing military and air force there, threatening neighboring countries which has created great concern for the security in the regions," they said.

"China's recent attempt to build military roads tin Doklam, the border between Bhutan and Tibet, has created tensions of war between India and China. These actions by China are of great concern and are a treat to the security of the world, and we strongly object to such act," the joint press release added.

"Based on the past years of Xi's failed policies in Tibet and increasing crackdown on Tibetans, we have no positive expectation and hope from Xi's dictatorship. We, the five NGOs strongly protest Xi's leadership in the years to come," the Tibetan NGO representatives said, adding that they will continue their "freedom struggle until justice is serve for Tibet."

Tibet was invaded by Communist China in 1949. Since that time, over 1.2 million out of only 6 million total Tibetans have been killed, over 6000 monasteries have been destroyed and acts of murder, rape, arbitrary imprisonment, torture, and cruel, inhuman and degrading treatment have been inflicted on the Tibetans inside Tibet. Beijing continues to call this a 'peaceful liberation,' and claims that the 'Tibetans are living in a Maoist socialist paradise.'