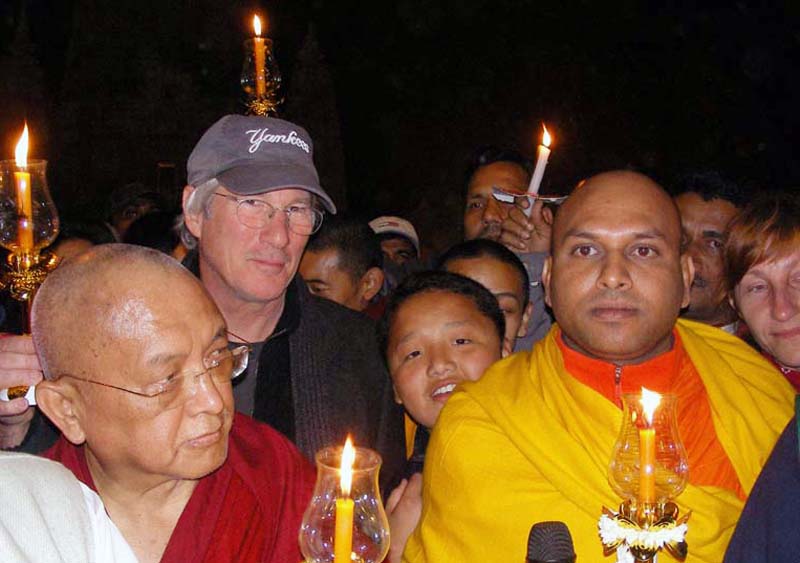 Bodhgaya: At 6pm on Wednesday, January 6, 2010, Tibetans for Compassion and Vegetarian Society (T4VS) organized a candlelight vigil that started from the Mahabodhi Temple grounds and continued by foot to the Bodh Gaya stupa. The candlelit procession was held as an entreaty to the Indian government to recognize Bodh Gaya as an official Holy City.

Bodh Gaya is considered one of the world's holiest places for Buddhists as it historically is the site from where 22,000 living Buddhas have come, including Buddha Sakyamuni, and it is also, perhaps most famously, known as the spot where the Lord Buddha achieved enlightenment. Bodh Gaya is a very holy and respected place, but it is sad to say that at this time the Indian government does not recognize Bodh Gaya as a Holy City.

"We are requesting that the government of India accepts that Bodh Gaya is an official Holy City as soon as possible," said a member of the organizing Compassion and Vegetarian Movement of Tibet. "That's why the candlelight vigil has been organized."

The group is planning also to organize a signature campaign that it will forward to the Indian government as further appeal. As part of its own campaign, the group also has been encouraging those attending the Buddhist teachings in Bodh Gaya to become vegetarian.

Lama Soepa Rinpoche and the Hollywood star Richard Gere were invited as guest speakers to the vigil. Gere spoke about world peace, trust and mutual respect between China and India, and he also pressed for a peaceful Tibet. Lama S Rinpoche has recently published a book called The Seed of Compassion for Others.

"I think people of all true traditions in their hearts know that we really are brothers and sisters, no matter how big our brains are. If we are living creatures, we really are here together and we are travelling on the road of life together, as brothers and sisters. So I am very thankful to be here, it's not what I had expected. Its really something quite extraordinary," Gere told reporters.

The ceremony concluded with mass prayers in front of the ancient Buddhist stupa.