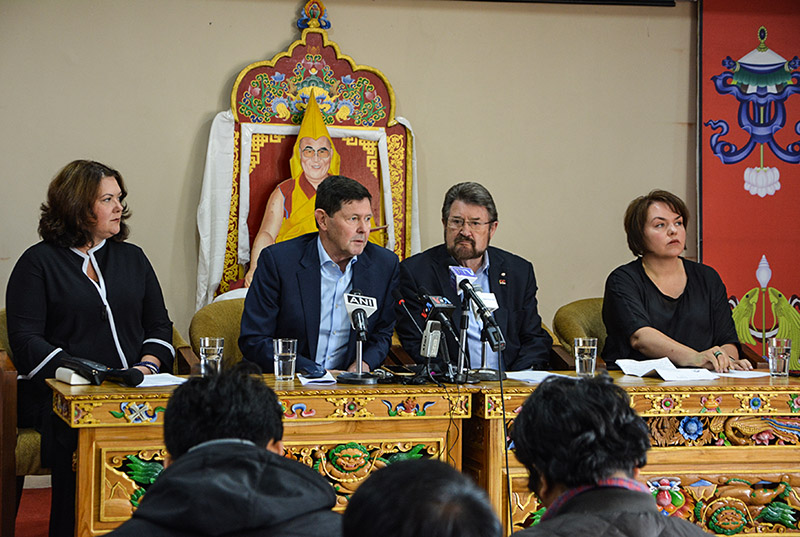 Dharamshala — 'The Tibet issue needs to be continually spoken about and pressure must be placed on the Chinese to bring an end to what has been a horrible situation in Tibet a horrible situation for many decades,' an Australian parliamentary delegation told members of the media at a press conference in Dharamshala, India, on November 23, 2017.

Dharamshala — 'The Tibet issue needs to be continually spoken about and pressure must be placed on the Chinese to bring an end to what has been a horrible situation in Tibet a horrible situation for many decades,' an Australian parliamentary delegation told members of the media at a press conference in Dharamshala, India, on November 23, 2017.

The press conference took place at Norbu House, Mcleodganj by a four member Australian parliamentary delegation to talk about Australia's stand on Tibet.

The delegation expressed their gratitude to the CTA and the government of India for the visit and spoke of their experiences of visiting the Tibetan community, include Tibetan Children's Village. The delegation is in Dharamshala on an official 4 day visit from November 20-23.

Senator Derryn Hinch spoke highly of the Middle Way Approach and the Tibetan people's commitment to it. "We had, years ago an expression in Australia: 'populate or perish' and that meant increase your population or perish. I said to the Dalai Lama in Delhi, that the Chinese for a while, maybe still, have this different version of populate or perish and that was through the Han and the other people who would populate Tibet in the hope that you will perish and you (Tibetans) aren't perishing."

"We've seen signs here, your background, your backbone and your passion will see you through the Middle Way," said Senator Derryn Hinch whilst talking about China's unjust occupation of Tibet.

"For me this is a fact finding mission, it's an opportunity to have discussions with various people about the current predicament of the Tibetan people not just here, but to learn more about the situation that prevails at the current time in Tibet," said Hon Kevin Andrews.

"The Middle Way Approach has been promoted by His Holiness the Dalai Lama and by the Tibetan Parliament in exile for many decades now and it remains just as relevant today as it did a decade or two ago when it was first promoted," he added speaking about the relevance of the Middle Way Approach in today's world.

"We believe that the situation in Tibet needs to be resolved. The Middle Way Approach is an appropriate way to do that which stands between a full separate independent country and the current colonial situation which prevails under China. I believe that the Middle Way Approach needs to be continually spoken about and pressure must be placed on the Chinese to bring about an end to what has been a horrible situation for many decades and I'm sure that we will go back to Australia and talk about this issue in the Australian parliament and more broadly- internationally to bring about a peaceful resolution to this ongoing problem," Andrews added.

Meryl Jane Swanson of the Labor Party of Australia, while speaking of the will of the Tibetan people remarked "You have masterfully continued your remarkable culture through great difficulty in exile and I congratulate you for that. I feel personally very encouraged and I think that you are exemplars to the world of people maintaining hope, but not just maintaining hope, maintaining a culture, educating future generations and living truly as enlightened citizens of a world that is in desperate need of such wisdom."

"It has been a wonderful opportunity to learn more about your culture, your thinking and about your hearts and souls. You are an erudite, elegant and enlightened people," Swanson added, in admiration of the Tibetan people.

Senator Kimberly Kitching from the Australian labour party said, "My favourite part of our visit was the Tibetan Children's Village which was a place of such happiness. It was lovely to see the children and to understand how they're schooled" She further compared this system to that of Israel, saying, "it reminded me a lot of Israel and the emphasis on the education that is given in that society and as we all know Israel has become a powerhouse both economically and culturally."

Senator Hinch whilst talking about how countries' views of China and Tibet are changing said, "You'll find, going back a few years Western nations were sometimes worried that if we meet with the Dalai Lama, will that affect our economic ties with China. I think those days are over."

Tibet was invaded by the Communist regime in China, starting in 1949. Since that time, over 1.2 million out of six Tibetans died as a direct result of China's invasion and continued occupation of Tibet, over 6000 monasteries have been looted and destroyed— Crimes against Humanity and Genocide include murder, massacres, torture, rape, starvation, extreme deprivation, forced marches, enslavement, brutal violence, and systematic extermination.