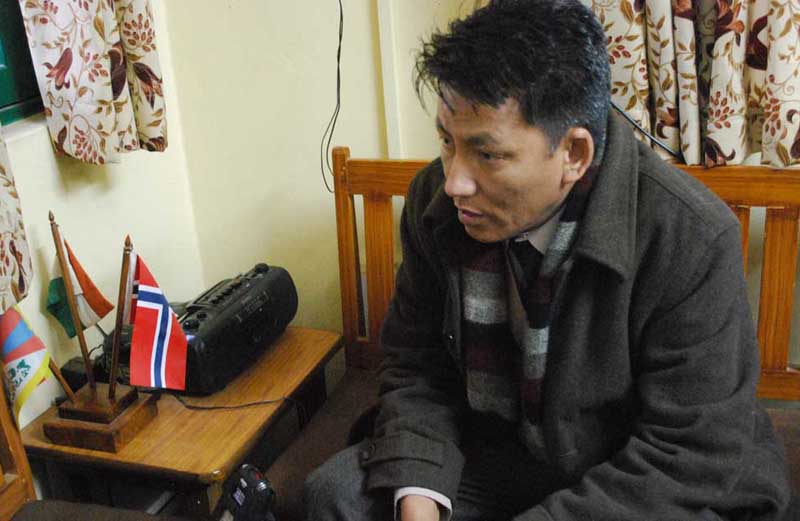 Paris: No independent news or information can be reported by the print media, broadcast media or new media in Chinese-controlled Tibet. But outside the country, especially in India, where hundreds of thousands of Tibetans have found refuge, independent news media produce and disseminate alternative news. Despite jamming by China, radio Voice of Tibet functions as a voice for the Tibetans who cannot speak for themselves. Reporters Without Borders met the station's editor-in-chief, Karma Yeshi, in Dharamsala, in northern India.

Can you tell us a little bit about the history of Voice of Tibet?

It was founded in Norway by Norwegian Human Rights House, the Norwegian Tibet Committee, and Worldview Rights. Initially, we had only two 15-minute programmes, five days a week and our office was in Oslo. In 1997, we moved our office from Oslo to Dharamsala. Then, in 1999, to reach out to the Chinese people, we started a 15-minute programme in Chinese. Now, we have a 45-minute programme - 30 minutes in Tibetan and 15 minutes in Mandarin Chinese - which we broadcast up to five times a day during the week. We also have a website, so that people in Tibet and throughout the world can listen to the station online.

Where do most of your listeners live?

Our main target is Tibet, and China. So we beam our programme from different transmitters, targeting Tibet and China. Then we have another transmitter targeting our audience in India, Nepal, and Bhutan. Our signal is fairly good in parts of Tibet and northern India but unfortunately it is very poor in Lhasa and Shigatse because the Chinese jamming is very powerful. So that is our biggest challenge.

Our programme is doing well in southern India, where the largest Tibetan community lives, and it can be heard here in Dharamsala too. And then, people in Taiwan, Hong Kong, and some parts of China also log on to our website and listen to our Chinese programme on the online service. So we have an international audience of Tibetans and Chinese living outside China.

Can you tell us about Chinese jamming of your short-wave signal in Tibet?

When we broadcast our news on our own frequency, which is specifically booked for Voice of Tibet according to international telecommunication law, China is not supposed to use the same frequency as it is one of the law's signatories. But China, you know, can play any game. So they are violating the international convention they signed. They cannot stop us from broadcasting from exile, just as we cannot stop their jamming. We have to use our tactics to overcome their jamming. So we often change our frequency but that means we lose our audience.

The Chinese newspaper Global Times accuses Voice of Tibet of supporting Tibetan independence. How do you respond?

Radio Voice of Tibet is a platform for all the Tibetan people and Tibet-loving people. We do stories on all kinds of subjects whether exile government news, Dalai Lama news or Tibetan NGOs. We do stories about India-China relations and Tibet, China-US relations and Tibet. Voice of Tibet does not have any political leaning. Our aim is to provide a platform for everybody. These Chinese accusations are baseless. We don't have any political position as such, whether we are Middle Way supporters or independence supporters.

What feedback do you get from your listeners in Tibet?

Getting feedback from inside Tibet is becoming more and more difficult. But we meet people who have recently arrived from Tibet and we ask them, "Do you listen to radio Voice of Tibet?" Sometimes they say yes and sometimes no. There are people who say, "Please broadcast the Dalai Lama's teachings more often." Many Tibetans have learned to listen to international radio stations, in part because it is one of the few ways of listening to the Dalai Lama.

How do you get information from inside Tibet?

Getting information from inside Tibet is very difficult right now. We obtain it indirectly from calls from our connections in different parts of the world. There are many people, especially Tibetan monks in southern India, who come from Tibet and we get news through them as well. All the information we receive is checked and double-checked. Because being the first to send information is not important for us. Sending right information, true information, that is very, very important. So we check and cross-check with different sources throughout the world and all of the Tibetan research centres, such as the Tibetan Centre for Human Rights and Democracy.