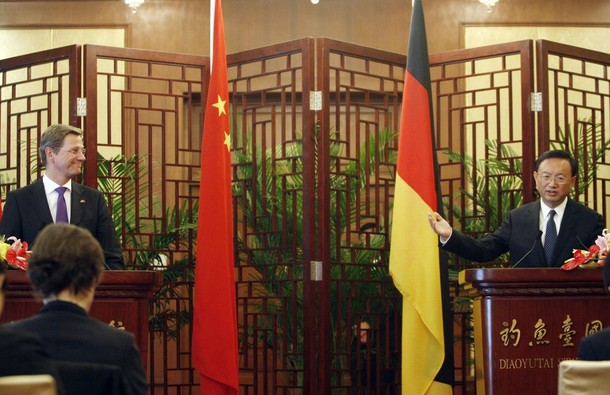 German Foreign Minister Guido Westerwelle arrived in Beijing on Friday.  In talks with his counterpart Yang Jiechi there, he said he raised human rights, press freedom and freedom of speech in China and as well as the situation in Tibet.

Regarding the Himalayan region of Tibet, the two foreign ministers shared their "different views." Yang reiterated that Beijing regards the region as a part of the territory of China. The Chinese government indirectly warned Westerwelle not to meet with Tibetan leader the Dalai Lama, the Tibetan spiritual leader. Yang said the Chinese government was "absolutely against" any official visits between the Dalai Lama and international governments.

Friday's meeting between Guido Westerwelle and Chinese Foreign Minister Yang Jiechi was followed by a press conference. Westerwelle told jounalists that he had used his talks with Yang to broach the subjects of human rights, press freedom and freedom of speech in China.

The two sides exchanged their "different views" on Tibet, Westerwelle said at a joint press conference with Yang, DPA reported. "My foreign minister counterpart knows that a cornerstone of our foreign policy is standing up for human rights, for the protection of minorities, freedom of opinion, freedom of the press and freedom of religion."

Westerwelle was expected to discuss specific cases of imprisoned dissidents in his meetings later on Friday. The wife of Liu Xiaobo, who was sentenced last month to 11 years in prison for "incitement to subvert state power," has asked Westerwelle to bring up her husband's case with Yang and Prime Minister Wen Jiabao. "It would be very important," she told the German press agency, DPA.

When asked about US internet giant Google's threat to withdraw from China following a "highly sophisticated and targeted" cyber attack originating from China, Yang repeated China's defence of its position.

He said the internet in China was "open" but all service providers must follow the law and prevent "harm to society."

Relations between China and Germany were strained when German Chancellor Angela Merkel met with Tibetan spiritual leader His Holiness the Dalai Lama in 2007.