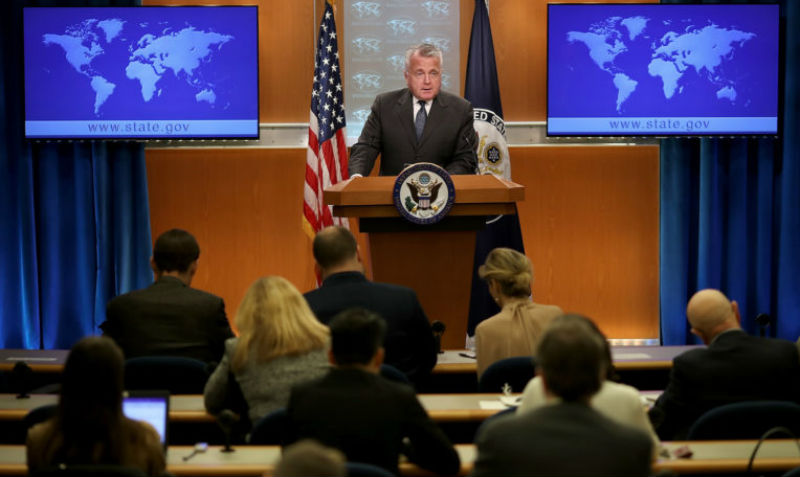 Acting U.S. Secretary of State John Sullivan speaks on the release of the 2017 Country Reports on Human Rights Practices at April 20, 2018, at the U.S. Department of State in Washington, DC. Photo: Win McNamee/Getty Images

Dharamshala — The US State Department’s Bureau of Democracy, Human Rights and Labor (DRL) in Washington DC released its annual report on the status of global human rights on April 20, claiming that human rights in Tibet have continued to deteriorate.

The 2017 annual country reports on human rights practices, the 42nd to be produced, was launched by Acting Secretary of State John Sullivan. In his remarks delivered at the report launch, Acting Secretary Sullivan said that “China continues to spread the worst features of its authoritarian system, including restrictions on activists, civil society, freedom of expression, and the use of arbitrary surveillance.”

The report reads: "The presence of the paramilitary People’s Armed Police (PAP) and other security forces remained at high levels in many communities on the Tibetan Plateau, particularly in the TAR and certain parts of Tibetan areas in Sichuan Province. Repression was severe throughout the year but increased in the periods before and during politically and religiously sensitive anniversaries and events. Authorities detained individuals in Tibetan areas after they reportedly protested against government or business actions or expressed their support for the Dalai Lama.

"The government strictly controlled information about, and access to, the TAR and some key Tibetan areas outside the TAR. The Chinese government harassed or detained Tibetans as punishment for speaking to foreigners, attempting to provide information to persons abroad, or communicating information regarding protests or other expressions of discontent through cell phones, email, or the internet, and placed restrictions on their freedom of movement."

Regarding the concerning trend of detention of Tibetans, the report states, "Arbitrary arrest and detention was a problem. Public security agencies are required by law to notify the relatives or employer of a detained person within 24 hours of their detention, but they often failed to do so when Tibetans and others were detained for political reasons. With a detention warrant, public security officers may legally detain persons throughout the PRC for up to 37 days without formally arresting or charging them. Following the 37-day period, public security officers must either formally arrest or release the detainee. Security officials frequently violated these requirements. It was unclear how many Tibetan detainees the authorities held under forms of detention not subject to judicial review.

"There were reports of recently released prisoners permanently disabled or in extremely poor health because of the harsh treatment they endured in prison (see Political Prisoners and Detainees subsection below). Former prisoners reported being isolated in small cells for months at a time and deprived of sleep, sunlight, and adequate food. According to individuals who completed their prison terms during the year, prisoners rarely received medical care except in cases of serious illness. There were many cases of detained and imprisoned persons being denied visitors.

"According to local contacts, authorities detained Thewo Kunchok Nyima, a well-known monk scholar of Drepung Monastery, in 2008 for acting as the 'ring leader' and the main instigator of protests in Lhasa. Kunchok Nyima has reportedly been serving a 20-year sentence, but the government has not granted his family permission to visit him in prison. His whereabouts remained unknown.

"An unknown number of persons continued to be held in detention centers rather than prisons. In the 143 cases for which there was available information on sentencing, sentences ranged from two years’ to life imprisonment. Of the 143 persons, involved in those cases, 68 were monks, nuns, or Tibetan Buddhist reincarnate teachers."

Regarding freedom of press and expression, the report states: "Foreign journalists may visit the TAR only after obtaining a special travel permit from the government, and this permission was rarely granted. The Foreign Correspondents Club of China’s annual report stated reporting from 'Tibet proper remains off-limits to foreign journalists.' This same report noted many foreign journalists were also told that reporting in Tibetan areas outside the TAR was 'restricted or prohibited.'

"Authorities tightly controlled journalists who worked for the domestic press and could hire and fire them based on assessments of their political reliability. In May the TAR Press, Television, and Radio Bureau announced job vacancies with one of the listed job requirements to 'resolutely implement the Party’s line, principles, policies, and political stance, fight against separatism, and safeguard the motherland’s unity and ethnic unity.'

The report also added information about Tibetans' right to assemble and the preservation of the cultural heritage, stating, "Even in areas officially designated as 'autonomous,'Tibetans generally lacked the right to organize and play a meaningful role in the protection of their cultural heritage and unique natural environment. Tibetans often faced intimidation and arrest if they protested policies or practices they found objectionable.

"In 2015 authorities in Rebkong County in the Tibetan Region of Amdo, now administered under Qinghai Province, circulated a list of unlawful activities. The list included 'illegal associations formed in the name of the Tibetan language, the environment, and education.' As was the case in the previous year, sources in the area reported this list remained in force and that no new associations had been formed since the list was published," the report added.

The annual country report further divulged restrictions on freedom of expression, censorship and internet freedom, freedom of movement, and religious freedom. The lack of Tibetan-language education in public schools and religious education in monasteries, despite Tibetan being an official language in Tibet Autonomous Region besides Mandarin Chinese, has “continued to disrupt traditional living patterns and customs and accelerate forced assimilation.”

The destruction of Larung Gar and Yachen Gar, Tibetan Buddhist education centers in Kardze prefecture in 2016 have caused further harm to the illiteracy problem in Tibetan areas. The annual report of the Human Rights and Labor (DRL) in Washington DC evaluates the fundamental freedoms, the rule of law, and the global state of human rights in the past year.