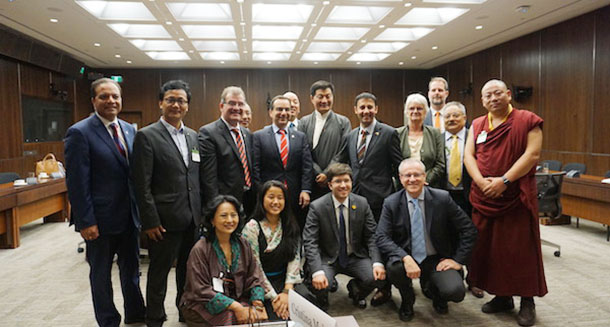 Ottawa, Canada — "This delegation truly represents Tibet,” President Dr Lobsang Sangay said while testifying before the Canadian Parliamentary Standing Committee on Foreign Affair and International Development, referring to a recent hearing of a group of the Chinese Communist party puppets from Tibet, whose remarks received skepticism and criticism.

Dr Lobsang Sangay President of the Central Tibetan Administration and a delegation of Tibetan Parliament-in-Exile appeared before the Canadian Parliament’s Standing Committee on Foreign Affairs and International Development on June 12, 2018.

"The hearing included a presentation by President Dr Lobsang Sangay followed by an extensive question and answer session with the committee members," according to the CTA official media.

“This delegation truly represents Tibet,” said President Dr. Sangay, referring to last week’s hearing of a delegation from the so-called ‘Tibet Autonomous Region’ (TAR), whose remarks were received with skepticism and criticism by the same hearing committee. The previous delegation ‘served as a smoke screen for the grave human rights violations that are going on in Tibet’, he added.

Dr Sangay mentioned the Freedom House reports ranking Tibet the least free place on earth, after Syria, as well as Reporters without Borders and other official reports, when describing the situation inside Tibet.

Given the nature of the committee, the hearing dealt with the relationship China has with the international community and with Canada in particular. When dealing with China, countries have two choices, argued Dr. Sangay : ‘Transform China to be more like you, or China will transform you to be more like it’.

The hearing also touched upon Canada’s support in Tibet, through aid and development organizations, in spite of the lack of reciprocity when it comes to access and entry in Tibet, for Canadian officials.

The hearing discussed the recent case of Tibetan activist Tashi Wangchuk, and Canada’s overt support for him and his advocacy; the question of Tibetan language and cultural assimilation was addressed. The committee also discussed issues related to religious freedom, the demolition of Larung Gar, the Panchen Lama, and the CCP’s intent to control the reincarnation process in the Tibetan monastic realm. Another subject the committee elaborated on was Tibet’s autonomy. ‘What we seek is support for the Middle Way Approach’, said Dr Sangay, mentioning that its implementation would only entail the implementation of the Chinese law and Constitution.

“Tibet is a litmus test for China and for Canada,” Dr. Sangay concluded. It is crucial that ‘money and morals go together and one is not exchanged with the other’, when dealing with China, warned Dr. Sangay.

The Tibetan President is in Ottawa during a pan-Canadian series of events titled ‘Thank you Canada’. 2018 marks 60 years in exile for the Tibetan community.