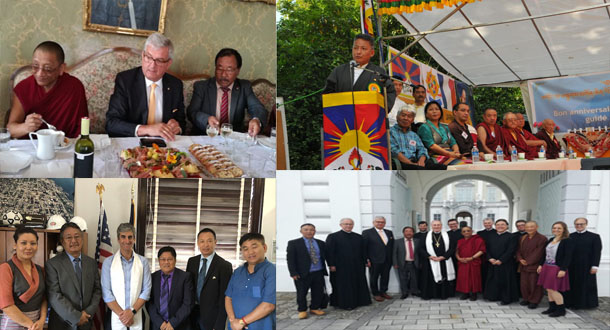 The Minister attended the Tibetan Community meeting and spoke about the need to pay more attention to the Tibetan Culture, unity among Tibetans and to live an ethical life. He further stressed that if Tibetan seriously follow the teachings and the advice of His Holiness the Dalai Lama then this would bring more happiness in our society, longevity life to His Holiness, which is the ultimate benefit to both this and afterlife.Later at the invitation of the Korean monk Ven Bop Jon Sunim, Kalon visited the World peace Stupa at Grafenworth.

Karma Yeshi, Kalon for the Department of Finance, CTA attended the public birthday celebration of His Holiness the Dalai Lama organised the Tibetan community in France on 8 July. He spoke at length about the achievements of Kashag in its past 2 years tenure. He further urged the Tibetan community to involve in the upcoming projects and welfare initiatives by being better informed and garnering support.

Special guest, Andre Gattolin, French political scientist and Senator for Hauts-de-Seine addressed the gathering. He expressed his deep reverence and admiration for His Holiness the Dalai Lama and avowed to continue supporting the Tibetan cause in his work.

He arrived on Friday in Brussels from Paris where he had been engaged in matters relating to promotion and better participation by Tibetans in the Green Book campaign. He is being accompanied by Kalsang Choedon, Department of Finance.

He was received at the Brussels main train station by Representative Tashi Phuntsok and the staff of the Bureau du Tibet, Brussels. Since his arrival yesterday he has been engaged in dealing with issues relating to the green book and problem that may be faced by Tibetans in Belgium. This is also in continuation and furtherance of his earlier visit in March on the same subject. He will also visit other European countries including Netherlands and Spain.

Sonam Topgyal Khorlatsang Kalon for the Department of Home, CTA arrived on his official visit to Vermont on 9 July. President of Vermont Tibetan Association, Sonam Choephel and Vice President Tenzin Dolkar along with members of Tibetan community accorded a warm traditional welcome.

On 10 July, Kalon called on a number of US leaders and officials including State Director, John Patrick Tracy, Outreach Specialist at Office of U.S. Senator Bernie Sanders Haley Pero, Mayor of Burlington Miro Weinberger and several other leaders. Kalon later met with members of Vermont Tibetan community for a brief meeting. Kalon informed the public about Kashag’s ongoing visit to various Tibetan communities across the world.

Kalon said “The purpose of the visit is to inform the Tibetan communities on Kashag’s important undertakings in the past two years of its tenure and to ensure public’s involvement and awareness in the upcoming initiatives, projects and engagements of CTA in India and world.” He further spoke about CTA’s yearlong Thank you Year campaign and its successful campaigns organised so far in various Tibetan communities in the diaspora.

During the meetings with Tibetans and supporters, they have extended their sincere gratitude and appreciation to the representatives and leaders of the regions for continuously supporting the Tibetan cause and hosting the Tibetans with much respect and equal opportunities. They also apprised them of the critical human rights situations inside Tibet and how the Tibetans in diaspora are working towards fulfilling the aspirations their compatriots inside Tibet.