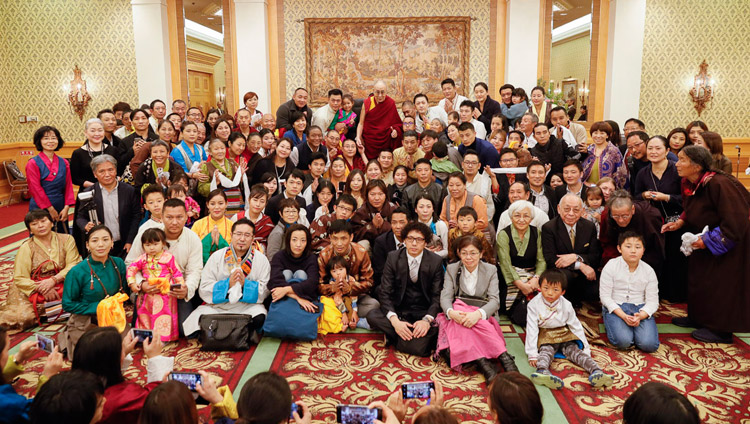 His Holiness the Dalai Lama posing for a group photo after his meeting with members of the Tibetan and Bhutanese communities in Tokyo, Japan on November 20, 2018. Photo by Tenzin Choejor

Tokyo, Japan — Speaking to a group of about 300 Tibetans and Bhutanese who had come to see him at his hotel Tuesday, His Holiness the Dalai Lama told them that he was on a short visit to Japan and encouraged them to keep their traditions with not only prayers and rituals but with study and analysis.

The spiritual leader also mentioned archaeological evidence of human presence in Tibet 35,000 years ago. He speculated that if theories of human beings originating in Africa and spreading out across the world from there were correct, they might have reached Tibet before China. Traces of ancient agriculture in Western Tibet might support this.

“Although the Jowo statue was originally brought to Lhasa from the Chinese capital of Xi’an, when it came to improving the Tibetan script it was modelled on the Indian Devanagari,” His Holiness observed. “Similarly, seeing a need for an authentic source of the teachings of the Buddha, Trisong Detsen again turned to India and invited Shantarakshita from Nalanda University.

"The tradition he introduced was not concerned with prayers and rituals but with study and analysis. Shantarakshita encouraged the translation of primarily Sanskrit Buddhist literature into Tibetan so Tibetans could study in their own language," His Holiness told the gathering of devotees.

“There were Chinese meditation masters who asserted that study was unnecessary. They held that meditation alone was a sufficient cause of enlightenment. Shantarakshita recommended that his student Kamalashila be invited to challenge this point of view, which he did successfully," he said.

“Much later Drepung Monastery was referred to as a second Nalanda because of its qualities as a centre of learning. The founder Jamyang Chöjé, Tashi Palden predicted that scholars superior to him would appear in the future. Abbot Kunkhyen Legpa Chöjé dreamt of the ‘Tenma’ bringing a Lama to Drepung in a palanquin, which seems to have been a premonition of the arrival of the 2nd Dalai Lama. Gendun Gyatso contributed to Drepung’s development. He established the Ganden Phodrang there and in due course became Abbot of both Drepung and Sera," he said.

“Buddhist studies on the basis of reason and logic are found only in the Tibetan tradition. You Bhutanese may call your language Dzongkha and the Trans-Himalayan people call it Bhoti, but it is written in the same script that the Tibetan Kangyur and Tengyur are written in," he said, adding: "These collections of the words of the Buddha and treatises of subsequent Indian Buddhist masters contain a wealth of knowledge of the workings of the mind and emotions, which is important to preserve because it remains crucially relevant today."

“I have been encouraged by the resolution of peoples from the Trans-Himalayan region to work to ensure that monasteries, nunneries and temples in the region be transformed into centres of learning. Not only are monks and nuns studying seriously, but lay-people, sometimes elderly lay-people too. “Je Tsongkhapa was an outstanding scholar," His Holiness said.

"When you read what he wrote you can see that he made a point of unravelling and clarifying the most difficult points. Those of you from Bhutan, who may follow Nyingma and Kagyu traditions, would do well to read Longchenpa’s ‘Treasury of Philosophical Tenets’ (Drubta Dzö) and his ‘Wish Fulfilling Treasury’ (Yishyin Dzö), which entail an exhaustive presentation of the Buddhist path.”

Since many of those gathered before him were students, His Holiness gave a transmission of the Manjushri Prayer and mantra, as well as the mantras of Avalokiteshvara and Tara. He posed for photographs with them in groups.