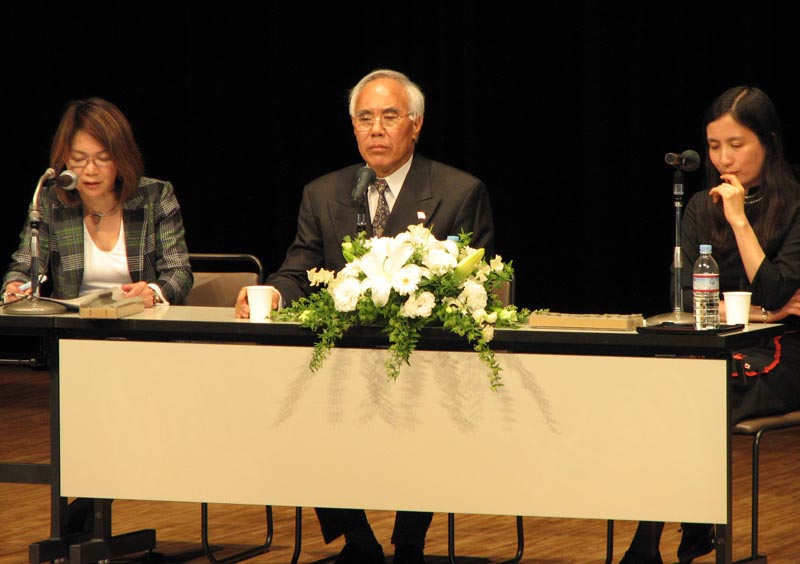 Tokyo: Tempa Tsering, Tibetan minister and Chief Representative of His Holiness the Dalai Lama's Bureau office in Delhi, on the second leg of his visit to Japan addressed Japanese students and general public at Yotsuya Public hall in Tokyo on Tibet issue. Prof Ishihama of Waseda University shared the dais to give highlight on Tibetan history from the Japanese intellectual perspective to the audience of some hundred people.

Prof. Ishihama in presentation on Tibetan history, made it clear that Tibet once existed as an independent nation. She dwelt on the spiritual influence that Tibetan Buddhist masters wielded over the Manchu, Chinese and Mongol emperors. She referred to the notes recorded by some Jesuit travelers to Tibet around 17th century that Dalai Lamas were not only revered in Tibet but equally in the neighboring countries like, Mongol, China and Nepal etc. "Tibet was a well established country in every sense." She said. "The problem was Tibet never did anything seriously to contact the outside world." She lamented.

Tempa Tsering spoke on the general history of Tibet and how in 1950s China invaded Tibet and how the Tibetan people, its religion and culture suffered. He recounted the difficulties and sufferings of the Tibetan when they first arrived in Nepal and India as refugees, and the current situation of Tibetans in exile.

The minister described the situation in Tibet as critical, where Tibetans are reduced to second-class citizen in their own country. "All the developments [including the railways, roads and airfields] that China boast of in Tibet are geared to serve the interest of Chinese government and to accommodate continued Chinese migration into Tibet."

Prof Ishihama and Tempa Tsering la attended to questions from the audience. Answering to a question on Dalai Lama's reincarnation and China's interference, Prof Ishihama said that His Holiness on numerous occasions has said that the institution of Dalai Lama will live with the need of Tibetans, "purpose of the reincarnation is to continue the work of the former Dalai Lama, so to carry out the unfinished task of the 14th Dalai Lama, the 15th would come from a place where it can freely work for the Tibetan cause." She explained.

On what Japanese and Japanese business community could do for Tibet, Kalon Tempa Tsering replied that they should read and study Tibetan history and to support justice and freedom. He explained about Tibetan Chamber of Commerce where the business community in Japan can study the possibility of forming mutually beneficial partnership and employment opportunities.

Mr. Lhakpa Tshoko, Representative of Liaison Office of His Holiness the Dalai Lama for Japan and East Asia, thanked the speakers and audiences for their participation in the talk. He requested the Japanese public's continued support for the Tibetan cause.